Xbox certainly thought outside of the box for its latest promo, but it looks tasty, so we won’t argue. It teamed up with Krispy Kreme to create an Xbox-themed donut, called the Nexus Level, to celebrate 20 years of Xbox. Oh—Xbox is also giving away free Game Pass Ultimate and an Xbox Series S!

What’s even sweeter than this mouthwatering fluffy donut—which is a classic Krispy Kreme donut filled with brownie batter and topped with green icing—is that you can get one month of free Xbox Game Pass Ultimate with your initial purchase of a box of the treats. This makes for an easy way to try out the service if you haven’t already.

Welcome to the next generation

The promotion is only available to those in the UK and Ireland for now, though we are crossing our fingers that it comes to the other countries as well. If you buy a box of the themed donuts anytime between August 2 and 22nd, you’ll have a chance at winning an Xbox Series S. Once you have your box, just scan the QR code on it and enter your unique code. Good luck!

See also  The best features coming to your Mac this fall
Share on FacebookShare on TwitterShare on LinkedInShare on Reddit
techregisterJuly 28, 2021 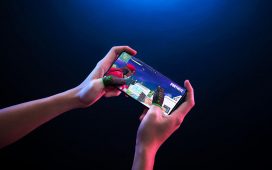