The next generation of the iPhone will be here in roughly four months’ time.

According to information obtained by Apple-focused website iDropNews, the forthcoming iPhone 14 will be unveiled on September 13.

Apple itself hasn’t confirmed or denied anything surrounding the leak, but the date would certainly fit with the company’s history of iPhone releases.

Traditionally, the biggest launch in the annual smartphone calendar comes on a Tuesday in mid-September.

‘From what I understand, Apple has something planned internally for ‘Week 37,’ iDropNews writes.

‘The Cupertino-based company usually holds all of its events on a Tuesday.

‘That means something will take place on September 13, 2022. Of course, I can not guarantee that this will be the event, but it sure looks like it.’

It’s not yet clear whether or not Apple’s next iPhone event will be held in-person or streamed virtually. While Covid has limited the last two years to livestreams, Apple’s WWDC event next month is expected to host a small amount of developers in person at the Apple Park campus in California.

Whether that means audience members will be allowed to see the new iPhone revealed in the flesh remains to be seen.

Even if the event is held in person, Apple will still broadcast a livestream of the event so that Apple fans around the world can see the action as it happens.

Of course, we also need to take this date with a pinch of salt as it could simply be a placeholder – set to change for any number of reasons once we get closer.

What will Apple reveal in September?

For the last couple of years, Apple has produced four distinct models of iPhone: the standard version, a smaller ‘mini’ version, a more expensive ‘pro’ version and a larger, premium ‘pro max’ version.

In 2022, rumours suggest the smallest member of the family will be dropped in favour of a larger version of the standard iPhone.

The idea has been reinforced by a leaked image circulating on Chinese social media site Weibo showing physical moulds of the upcoming gadgets.

Made from aluminium, the moulds are likely to have been created to give third-party case manufacturers accurate dimensions to work from. It means they can have their iPhone 14 cases good to go from the second the new gadget is released.

And while they don’t look all that dissimilar from current iPhone models, there will be small changes to things like the camera bump on the back or the general thickness of the phone’s chassis to account for differences in battery size.

When will I be able to buy an iPhone 14?

Just because the iPhone 14 is revealed in early September, doesn’t mean you’ll immediately be able to get one.

There is usually a ten-day to two-week window after the announcement before the phones go on sale.

So, theoretically, if the September 13 date is accurate, it’s likely the iPhone 14 will go on sale around September 30.

However, given ongoing supply chain issues caused by Covid lockdowns taking place in China, this could be pushed back to October is Apple isn’t avaialble to get shipments through.

How much will the iPhone 14 cost?

Chances are that the iPhone 14 will come in somewhere around £800 with the more advanced iPhone 14 Pro closer to £1,000.

The larger-sized devices will likely be even costlier, coming it at closer to £1,100.

And those are likely to be the entry-level prices with the minimum amount of device storage.

Which networks will offer the iPhone 14?

The iPhone is the most recognisable smartphone on the market and, as a result, you can be sure it’ll be supported by every major network.

All the UK’s major networks, including EE, Three, Vodafone and O2, will be offering the next iPhone to customers looking to upgrade.


MORE : Leaked iPhone 14 image hints at what Apple may release in 2022 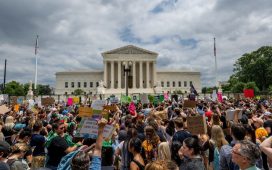 Abortion Goes Back to the People