For the Ironhead Squat Prospector gangs that populate the Ash Wastes of Necromunda, danger and terror lurk around every corner. From wild irradiated monsters that want to tear you limb from limb to glory-crazed rival gangs (who also want to tear you limb from limb), surviving in the hard-tack world of Necromunda is a challenge. But the Ironhead Squats don’t just want to survive in the Ash Wastes, they want to thrive! And that means building bigger, stronger, and tougher machinery and equipment to help them strip the few remaining mineral resources from the land. Enter: The Vartijan Exo-Driller suit of exo-armor. Games Workshop sent us one of these models to put together and try out for ourselves. Read on for our thoughts below.

How Does The Warhammer Necromunda Vartijan Exo-Driller Fit Into The Game?

The Warhammer Necromunda Vartijan Exo-Driller is considered a class of model known as a ‘Brute’ in Necromunda. What this means is that the Vartijan Exo-Driller is a special type of unit that can be recruited for your gang if your gang has enough reputation (a measure of how well they’ve been fighting in campaign battle). Across the board, Brutes are big, nasty, tough additions to your gang and their impact is immediately felt.

If you’re unfamiliar with Necromunda, essentially it’s an in-depth skirmish game set on the wasteland planet of Necromunda in the Warhammer 40K universe. And while Kill Team is also a Warhammer 40K skirmish game, Necromunda is much more focused on campaign play. You create a gang of fighters, give them names, equip them, and they earn experience points at the end of each battle. It’s very in-the-details, but the level of depth on display here is unmatched in any other Games Workshop game. Your fighters can be captured, you can recruit not only the above-mentioned brutes, but also ‘Hangers-On,’ physically-weak gang members like doctors and cooks who don’t help out in the fight, but add serious bonuses to your gang.

The Warhammer Necromunda Vartijan Exo-Driller is kind of like an upgraded version of your classic Ironhead Squat, with serious firepower. They have a 4″ move, a Weapon Skill of 4+, a Ballistics Skill of 3+, Strength 4, Toughness 5, with three wounds. If you’re new to Necromunda, all that means they’re pretty slow, are good at fighting, great at shooting, and are hardy and strong, with three hit points (as opposed to a regular Ironhead Squat’s single wound).

They come equipped with the Vartijan Fist (that’s that big nasty claw looking thing on its right arm), which has the special traits Melee, Power (which means it can’t be parried except by other power weapons and the target can’t save on a roll of 6), and Pulverize (which lets you upgrade flesh wounds to serious wounds with some good rolling). On the Vartijan’s left arm can be equipped either a heavy flamer, which blasts flames in a template across the battlefield, or a Vartijan Heavy Bolter, which can also lay waste to enemies in a hail of bullets.

Along with these weapons, the Vartijan Exo-Driller has special rules including the ability to be added as an extra sentry when setting up the battlefield, and has a Sensor Suite, giving it three more inches of visibility in low-vis conditions. All in all, the Vartijan plays exactly how it looks. It lumbers across the battlefield, soaks up damage, and unleashes devastation on rival gangs. Because it’s slow, it’s best not to let it get tangle up with quicker strike-and-fade style foes, and vehicles with a decent player piloting them could unravel your plans with the Vartijan, but if you can catch a group of gangers in his flamer, you’ll do the kind of damage that’s rarely seen in Necromunda.

What’s It Like To Assemble And Paint The Warhammer Necromunda Vartijan Exo-Driller?

It’s worth noting that the Warhammer Necromunda Vartijan Exo-Driller is a model from Forge World. That’s great, because it means it’s got so much added detail. But if you’re only used to putting together plastic Games Workshop models, a Forge World model may surprise you, as its made of resin. After washing the Vartijan Exo-Driller in some mild soap (to remove the mold-release that could cause a later paint job to peel) I assembled using super glue and, because I’m impatient, super glue accelerant. The pieces are all lightly notched and fit together perfectly, making this one of the easier Forge World models I’ve ever assembled. 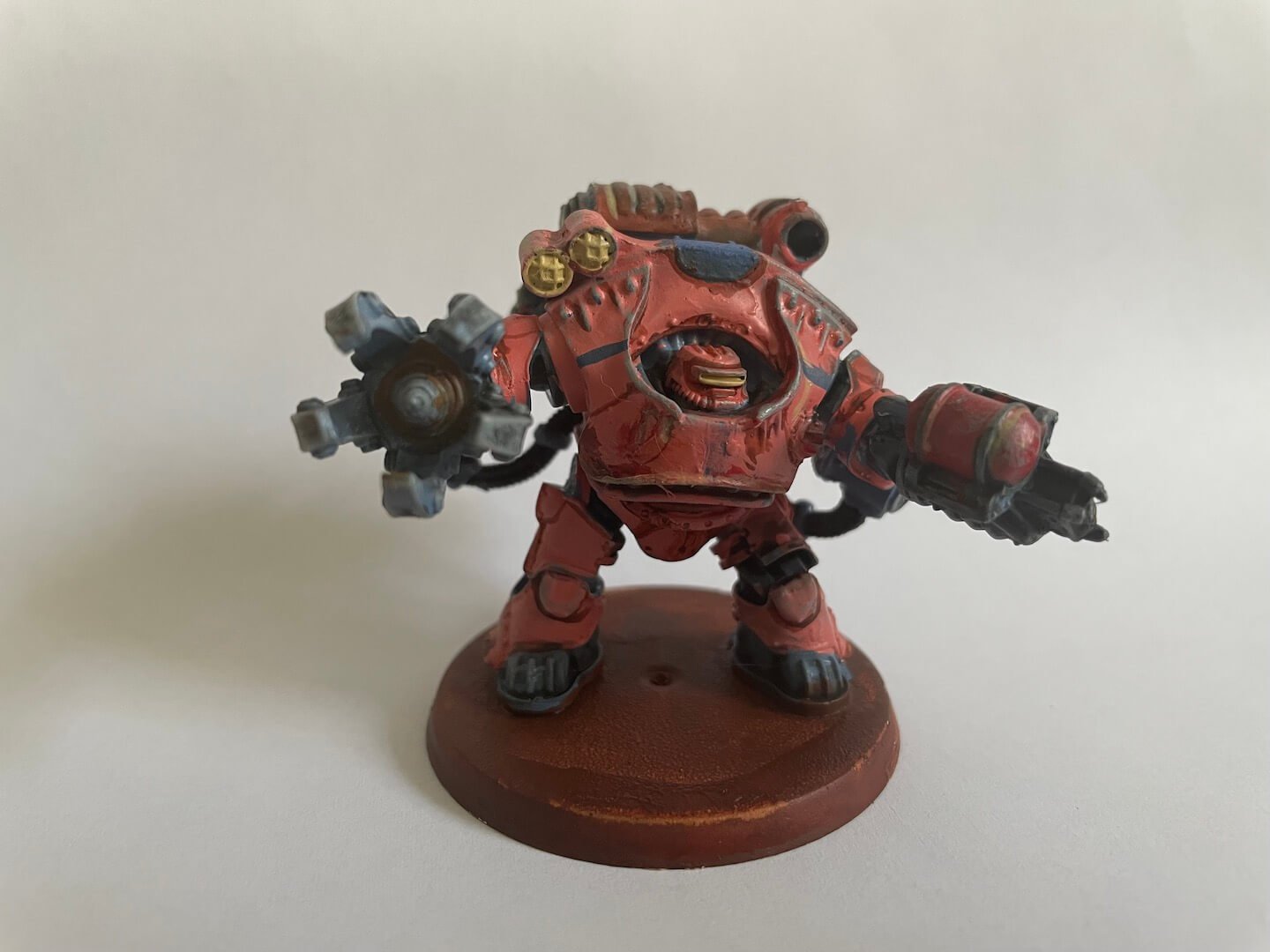 Painting it was an absolute blast, I decided to go for this faded salmon color with blue highlights. And after basing white and adding a few layers of my core color and a blue-ish gray to the metal parts, there was nothing much more needed than to do some shading, dry brush with light gray to make the metal pop, and add small details.

What Are Our Final Thoughts On The Warhammer Necromunda Vartijan Exo-Driller?

I absolutely love the way this model looks. It’s that sort of short, rounded, almost stubborn design that I think matches the ethos of the Ironhead Squat Prospectors so well. The equipment available to it, from weapons to sensors, make it a formidable force on the battlefield, and I’ll definitely be adding it to my Prospectors gang going forward, which we previously covered in a roundup of recent Necromunda releases in June.

If you’re building an Ironhead Squats Prospector gang, you should highly consider adding a Vartijan Exo-Driller to your collection. If you’re just looking to get into Necromunda, you may want to consider an intro product to the game, like the Ash Wastes beginner’s box.