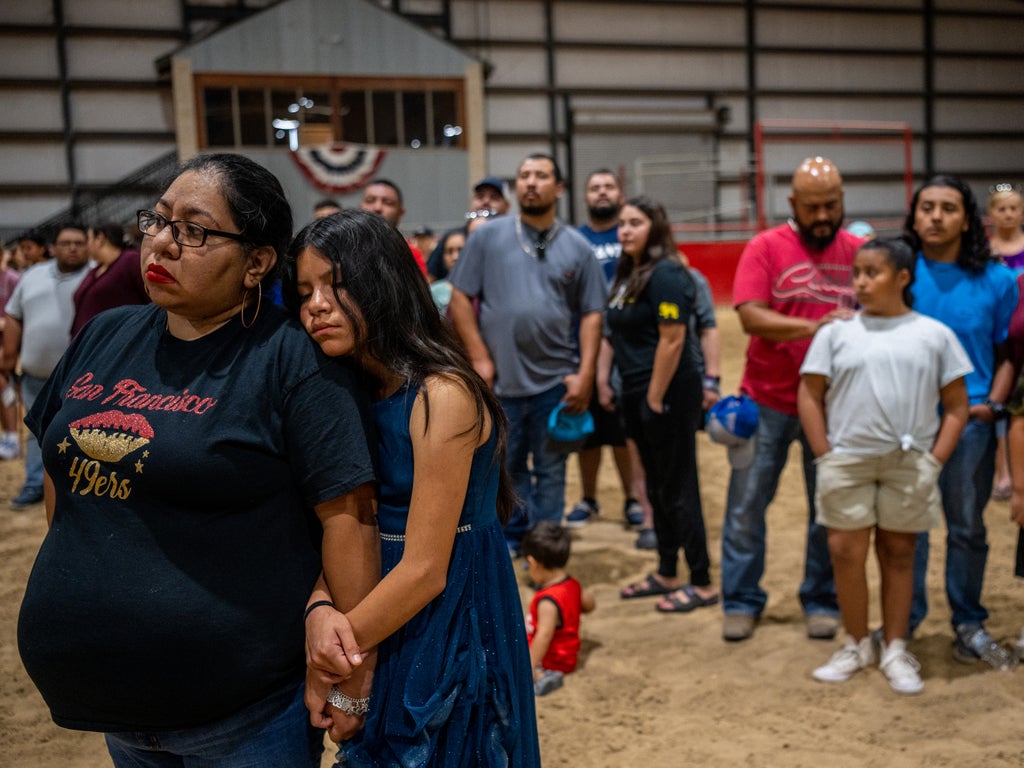 The American and Lone Star flags were flying at half-staff on Wednesday along the main strip of Uvalde, outside of City Hall, the library and in front of everywhere from gas stations to the Days Inn.

As traffic poured into the town – countless journalists grabbing any free inch of greenery for live shots – vehicles drove under a banner advertising sign-up for Pre-K and passed electronic signs on the side of the road, lit up with “Pray for Uvalde” and “Uvalde Strong”.

Just a few miles away, further into the roughly 15,000 person town, families and community members were emerging from a state of shocked grief to prepare for services in memory of the 19 children and two teachers senselessly shot dead the day before while in a classroom at Robb Elementary School.

Salvador Ramos, 18, opened fire on staff and students, committing the worst school mass shooting in nearly a decade. He also died on Tuesday, though officials have been vague about the timeline and circumstances surrounding his death; the answers about his motives and what really happened in that classroom died with him.

On Wednesday, however, no one was mentioning the shooter’s name in Uvalde; instead, they were focusing on the innocent lives lost and turning in despair to the only thing they could: faith.

An outdoor afternoon rosary was held at Sacred Heart Catholic Church, followed by a special Mass with a phalanx of clergy, including archbishop Gustavo Garcia-Siller, and a message from Pope Francis.

An hour later, traffic backed up for miles along US 90 as hundreds descended on the Uvalde County Fairplex to grieve with community and church leaders.

Governor Greg Abbott bowed his head as those gathered prayed, while a young student – about the same age as the fourth-grade victims – sobbed uncontrollably just a few rows behind him.

Amongst the mourners and reporters in the arena of the Fairplex stood the loved ones of victim Nevaeh Bravo, gathered around a seated woman holding the child’s photo.

Other families clung to each other and cried, many wearing the school colours and emblems, as emotional support golden retrievers waited outside to comfort the shattered community.

Church leaders invited those attending to pray and stay for as long as they needed to, while a violinist played Amazing Grace as some people trickled out and others continued to arrive.

Brianna Gonzales, 28, was sombre as she left the Fairplex, holding the hand of her young son, Emilio, as his older brother – a fourth-grader at Robb Elementary – walked ahead.

Ms Gonzales had picked her nine-year-old up early on Tuesday, not long before the shooting started, she told The Independent. Their cousin, another fourth-grader, did not survive the horrific attack.

Telling her older son about the tragedy “was hard,” she said. “He’s okay for now, but we’re just keeping a close eye on him.”

She knew plenty of people affected aside from her own family, she said.

“It’s a small town,” she said. “Everybody knows everybody, and everybody’s related to everybody.”

High schooler Lesslie Torres, 14, agreed that everybody had lost someone or knew victims.

“It was really heartbreaking hearing everything that happened to those kids,” Ms Torres, who had attended Robb herself, said as she walked into the Fairplex gathering.

“It’s really dreadful,” she told The Independent. “It really scared me, that it could happen here, because it was really unexpected – and it’s just really sad.”

The tragic events began on Tuesday, officials said, when Ramos shot his 66-year-old grandmother in the face at their Uvalde home, fled in her truck and then crashed it ouside the school.

The 18-year-old – who dropped out of school before he could graduate with his classmates, whose pictures lined US 90 this week – then reportedly got out with a rifle and approached a back door.

Officials said “an officer assigned to the school ‘engaged’ Ramos, but the gunman got into the building and down a hallway to a fourth-grade classroom”, the Associated Press reported. After locking the classroom door, he opened fire around 11.30 am with an AR-15-style rifle, carrying multiple magazines.

“A team including local officers and Border Patrol agents ultimately forced the door open and shot Ramos to death after he fired at them,” police said.

Questions continued to swirl on Wednesday about police response as locals and officials worked desperately to wrap their heads around what had happened.

The main focus, however, was still on the victims, with vigils and memorials taking place all over the country as well as closer to home.

Between Uvalde and San Antonio, hours after the Fairplex event, a small roadside group in Hondo held signs and candles, remembering the small “angels” as night deepened over the Texas Hill Country.

In Uvalde, families and locals braced for the morning as investigations continued and obituaries and funeral arrangements began to take shape – all under an umbrella of total disbelief.

“I always hear about it everywhere else,” Ms Gonzales told The Independent. “But I never thought it would happen here.”