The US and the Netherlands have emerged as early winners of the shift in derivatives trading out of London following the UK’s exit from the EU.

Data released on Thursday by IHS Markit highlight the move in trading this month from the City that came after a financial services agreement was omitted from the UK and EU’s post-Brexit deal.

In the US, trading in swaps used to hedge against moves in euro and sterling interest rates has doubled in the opening weeks of 2021. US venues now account for 23 per cent of the total for each currency, IHS Markit said. Global trading in dollar swaps on US venues rose to 48 per cent from 36 per cent the previous month, IHS added. At the same time, trading in all three currency swaps in Europe fell.

London has been the main hub in Europe for trading these sorts of derivatives, which attract around $2tn in turnover globally each day, meaning the move to the US has a bigger impact on the City.

Kirston Winters, managing director of MarkitSERV, IHS Markit’s derivatives data arm, said a shift to the US was inevitable given that investors tended to prefer trading in the most active markets.

“Time and time again the data show us that the over-the-counter derivative markets are global in nature and very agile,” he said, adding that market liquidity tended to concentrate by currency, not geography.

Amsterdam has also picked up some swaps and sovereign debt business since the start of the year, Sander van Leijenhorst, Brexit programme manager at the Autoriteit Financiële Markten, the Dutch regulator, told the Financial Times.

The Dutch city had been expected to emerge as a winner after many of the market’s biggest operators, such as Tradeweb, MarketAxess and Bloomberg, used it as a base for their EU operations.

Last year more than €154bn of sovereign debt was traded on CME’s Amsterdam venue, according to data from EU regulators. At the start of the year, it also welcomed the majority of EU share trading, typically up to €6bn a day, that had taken place in London. The shift this year in derivatives and bonds had not been as dramatic as that in equities, Mr van Leijenhorst said. 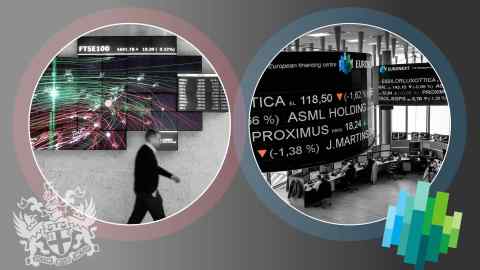 The US and the Netherlands have been beneficiaries as global debt markets have fragmented and eaten at London’s position dominating European bond trading, as well as some of the derivatives tied to them.

That split has been magnified by a dispute between London and Brussels, with each questioning the quality of the other’s regulation and supervision of swaps trading

Mr Winters said traders’ moves to the US reversed a trend from 2013-2015, when tough US rules for overseas traders on swaps pushed business out of Wall Street. However some traders remain wary of trading on US rules.

“We’ve spoken to a number of banks whose initial reaction was to move to [US venues] but are working on a plan to move some business to EU venues,” said Mr van Leijenhorst.