‘Newly released documents show Schiff knew all along there was no proof of Russia-Trump collusion.’ Wall Street Journal,’ Trump tweeted with a quote from the editorial board opinion piece’s sub-headline.

The Wall Street Journal released the op-ed on Tuesday titled ‘All the Adam Schiff Transcripts,’ where the editorial board asserted ‘no one should ever believe another word’ out of Schiff’s mouth.

‘Americans expect that politicians will lie, but sometimes the examples are so brazen that they deserve special notice,’ the op-ed charged. ‘Newly released Congressional testimony shows that Adam Schiff spread falsehoods shamelessly about Russia and Donald Trump for three years even as his own committee gathered contrary evidence.’

Schiff is the chairman of the House Intelligence Committee, which investigated potential collusion between Trump and Russia in the 2016 election.

Donald Trump touted a Wall Street Journal op-ed Wednesday where the editorial board bashed Adam Schiff for knowing there was no collusion between the president and Russia, but still acting like there was 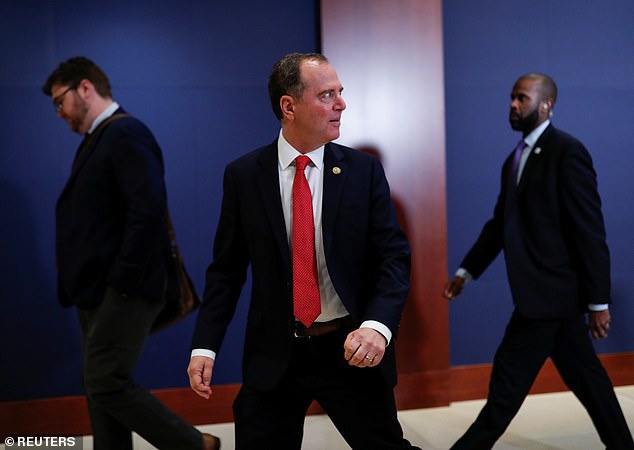 The Intelligence Chairman continuously teased in the media that he there was wrongdoing but said he couldn’t share the specifics, but the Journal editorial board now asserts: ‘[N]o one should ever believe another word he says’

The committee investigation, which started in January 2017 under then-Chairman Devin Nunes, concluded in March 2018 that Trump did not coordinate with Russia to best Hillary Clinton in his bid for president.

The op-ed claiming that Schiff actually knew there was no evidence of wrongdoing by the president emerged last week when the Intelligence Committee published 57,600 pages of 57 different interviews with witnesses in the Russia probe.

Transcripts of the interview were ready for release a while ago after the Intelligence Committee voted in September 2018 to make them public, but it was delayed by Schiff.

Between the time the House voted to declassify and release the documents, Special Counsel Robert Mueller released the Russia report and Trump has gone through an impeachment – also led by Schiff.

The California Democrat has asserted since launching his investigation that there was behind-the-scenes evidence proving there was collusion and would tease the he could not ‘go into particulars.’

‘The Russians offered help, the campaign accepted help,’ Schiff told CNN in December 2017. ‘The Russians gave help and the President made full use of that help.’

But the Journal asserts: ‘None of this was true, and Mr. Schiff knew it.’

In one instance of contradictory testimony, Former Director of National Intelligence James Clapper told Schiff and the panel of lawmakers in December 2017 that he ‘never saw any direct empirical evidence that the Trump campaign or someone in it was plotting/conspiring with the Russians to meddle with the election.’

‘I don’t recall anything being briefed up to me.’ Former Deputy AG Sally Yates confirmed. 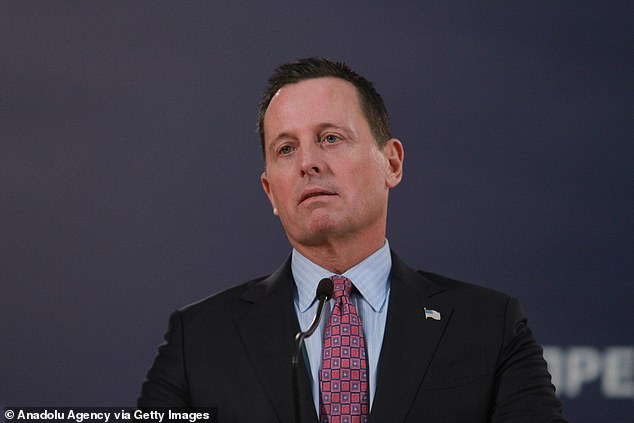 As Grenell decided to finally force release of the documents, Schiff said he was relieved, and blamed the delay on Trump’s administration.

‘These transcripts should have been released long before now, but the White House held up their release to the public by refusing to allow the Intelligence Community to make redactions on the basis of classified information, rather than White House political interests,’ Schiff said last week.

‘Only now, and during a deadly pandemic, has the President released his hold on this damning information and evidence,’ he continued.

‘Ultimately, this pattern of misconduct and deceit continued when President Trump once again sought to coerce a foreign government into providing him illicit assistance with his reelection campaign, this time from Ukraine. For his efforts, President Trump was impeached in the House and became the first ever U.S. President to to receive bipartisan votes to convict in the Senate,’ Schiff wrote in his statement.

The Journal editorial team wasn’t buying it, and urged its media colleagues to stop giving Schiff a platform.

‘He’s still making it up,’ it charged of Schiff’s continued claims against the president. ‘Last week he said the transcripts contain ‘evidence of the Trump campaign’s efforts to invite, make use of, and cover up Russia’s help in the 2016 presidential election.”

‘The question we’d ask our friends in the media is when are they going to stop playing the fool by putting him on the air? Mr. Schiff is a powerful figure with access to secrets that the rest of us don’t have and can’t check. He misled the country repeatedly on an issue that consumed American politics,’ the op-ed reads.

It concludes: ‘As for Mr. Schiff, no one should ever believe another word he says.’

Samsung could build UK 5G if Huawei is banned

iPhone 12 price tipped to be even more expensive

Android 11 Will Not Come With Scrolling Screenshot Support, Google Reveals