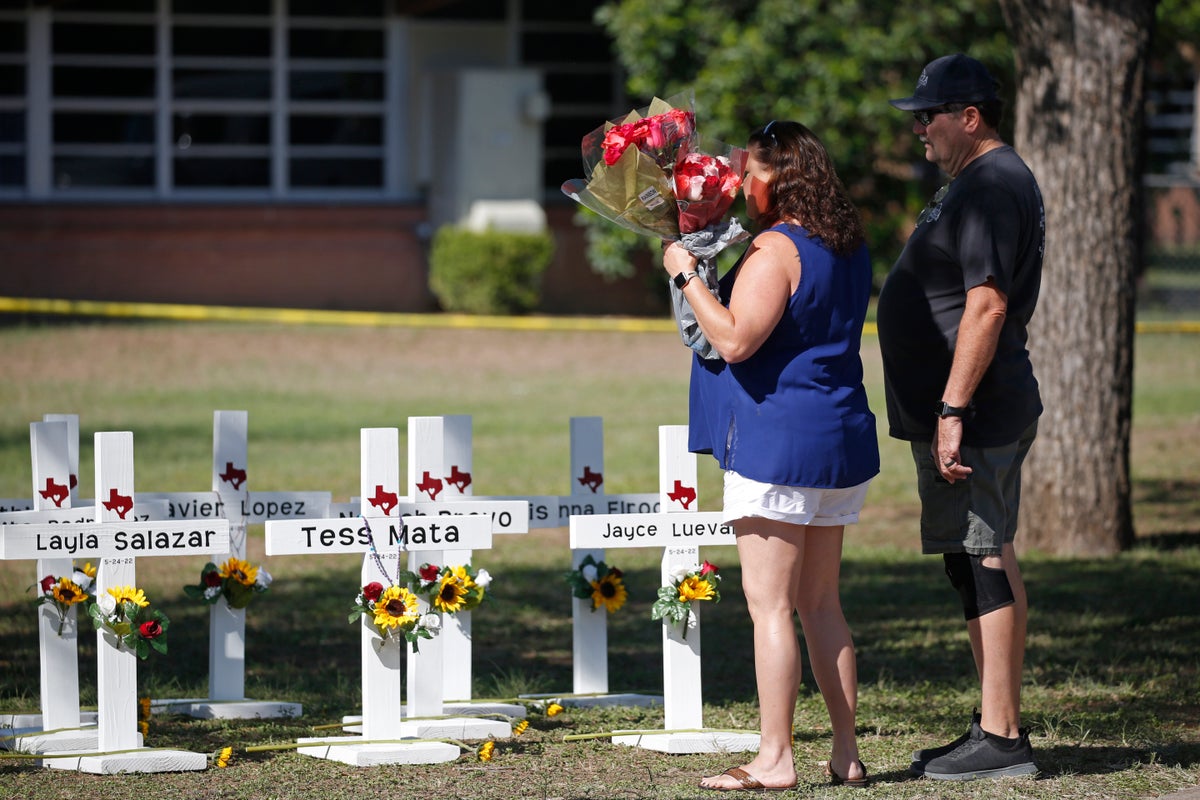 They came to Uvalde from all over Texas and farther afield, offering everything from blood to food to comfort. And a simple message: You are not alone.

As the Hill Country town reeled after Tuesday’s horrific school shooting – when a teenage gunman killed 19 children and two teachers at Robb Elementary school – there were no answers yet as to why Salvador Ramos, 18, attacked the school or how, exactly, the tragic events unfolded.

A Thursday press conference raised even more questions, as authorities contradicted previous reports and said the investigation would take time.

Most families of victims were quietly mourning, but supporters continued to come to Uvalde to help in any way they could.

One white SUV on Thursday, parked near the makeshift memorial on the town plaza, had written on the rear windshield that they’d travelled from Edinburg, Texas – four and a half hours away – to show their support for the victims and the community.

People were still lining up to donate blood in the aftermath, with more blood drives scheduled for the coming days and appointments quickly filling up.

In addition to the 19 killed, authorities said at least 17 others were injured in Tuesday’s attack, though the condition of most victims was unknown.

Officials said at Thursday’s news conference that they weren’t even sure how many people had escaped from the school amidst the chaos.

In small ways, however, out-of-towners were trying to ease that chaos with simple gestures.

Linda Garcia, owner of Bear County Bar B Que in San Antonio, stood outside the Uvalde County Fairplex on Wednesday night with a sign advertising free meals as locals prayed inside and Gov. Greg Abbott – who has blamed the shooting and similar incidents on mental illness – bowed his head alongside them.

She’d wanted to head the hour and a half west to Uvalde on the day of the shooting, she said, but had to gather supplies.

“You see it on the news, and it happens in other states, far away from your neighbourhood,” Ms Garcia told The Independent. “And this is in our backyard. We’re from San Antonio, and we travel through Uvalde all the time.

“And you feel like you want to do something; you just don’t know how to reach out to the families, you don’t know how you can help. But if we can help a few families or first responders or news personnel just by feeding them, you know, we just want to do what we can.”

Inside the Fairplex, Bonnie Fear, from Fort Collins, Colorado – an hour north of Denver – had flown to San Antonio the day after the shooting.

She’s the K-9 Crisis Response Coordinator for Lutheran Church Charities, and around her were golden retrievers from Texas and Oklahoma with other LCC representatives.

More dogs were scheduled to arrive Thursday from Colorado, she told The Independent, as she stood next to a stalwart retriever named Joy – a “friend who brings calming influence and allows people to open up their hearts,” the dog’s own business card explains.

Joy and the other canines, Ms Fear said, brought “calmness” in the wake of such an atrocious incident.

“It’s been relief; some people have cried, some have just [said] ‘Thank you for being here, this is what I needed,” she said.

She did not know whether any of the people petting the animals had been families of victims, but that wasn’t the point.

Trinity Lutheran Church in Uvalde, she said, had invited LCC to come with the canines on the day of the shooting – an effort to soothe the traumatised town.

“You don’t really see it right now, but you can feel it in the air,” she said of the town’s collective emotion. “We’ve been to many of these, unfortunately – and so we are equipped to just be present, be with them in that moment.

“If they’re crying, we can cry with them.”

In addition to the physical presence of people offering support, donations were also pouring in to help the town and victims’ families.

As of Thursday evening, The Texas Elementary School Shooting Victims Fund, a GoFundMe organised by VictimsFirst – “a network of families of the deceased and survivors from over two decades of previous mass shootings” – had raised almost $3.4m, in addition to hundreds of thousands raised for verified individual GoFundMe pages dedicated to specific victims.

VictimsFirst, on the page, said the group “started this fund to make sure that 100% of what is collected goes DIRECTLY to the victim base so the victims’ families and those wounded/injured are protected from fraud and exploitation.

“We do this because our own families have been re-victimized in the past by non-profits that collect funds for themselves after a mass shooting saying they will ‘support’ the families, which is usually the legal verbiage used when donations do not go directly to victims/survivors themselves,” the group wrote. “We vowed this would never happen again.”