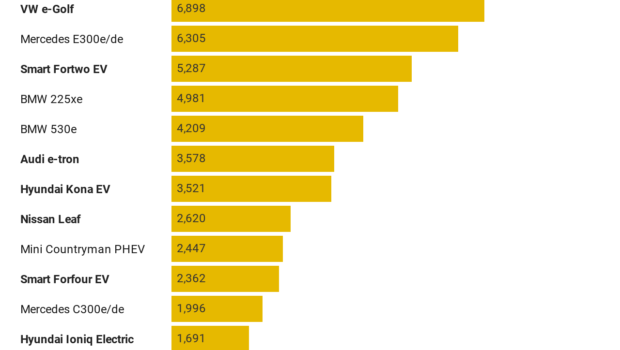 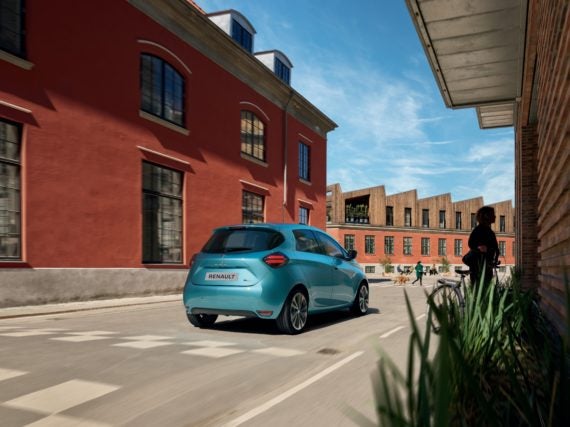 The German plug-in electric passenger vehicle market ended the year on fire, with registrations more than doubling in December, to 11,328 registrations. Plug-in hybrids (PHEVs) were up 198% year over year (YoY), pulling the market up significantly and balancing the 2019 BEV/PHEV share to 58% BEV (fully electric) vs. 42% PHEV (51% / 49% in December).

Looking at December best sellers, the Mercedes E300e/de twins three-peated the monthly leadership, with 964 units narrowly beating the high tide Tesla Model 3 (926 units). In addition, the Renault Zoe returned to the podium, with 780 units, signaling the return of the French hatchback.

Just off the podium we have the forever young VW e-Golf, with 764 units registered, while the BMW i3 closes this top 5 thanks to 630 registrations, just barely beating the #6 Smart Fortwo EV (623 units) to the finish line. 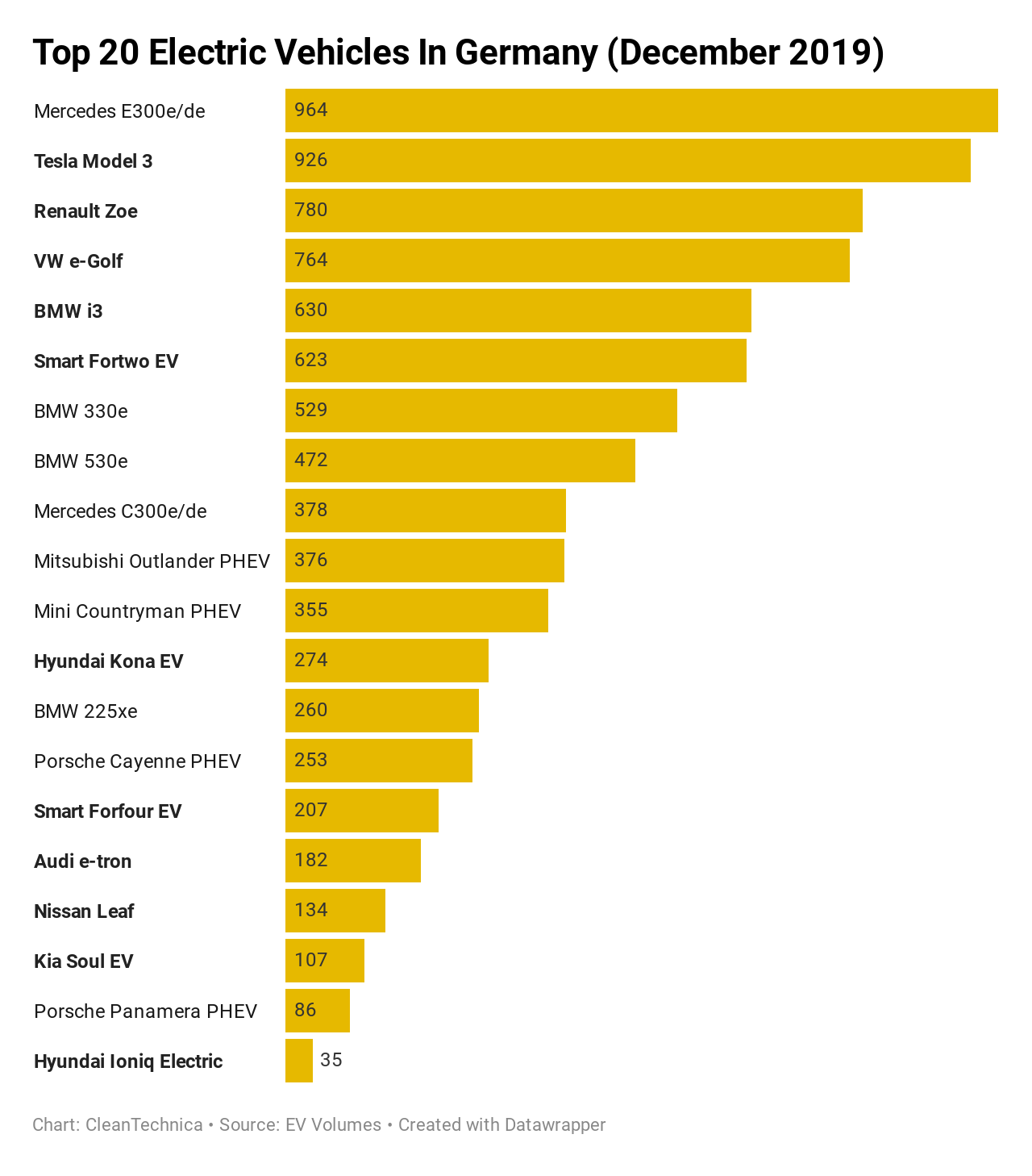 The German PEV market is known for close races, frequent changes and surprises, and the 2019 edition was no exception, with a leadership change occurring right in the last month of the year — the Renault Zoe managed to squeeze out the BMW i3 by just 49 units, with the French hatchback repeating its 2018 performance, in which it also won the #1 title, after two consecutive years as second best.

Despite a strong December, the Tesla Model 3 stayed 418 units behind the leader Renault Zoe, with the Californian ending in the last place of the podium. 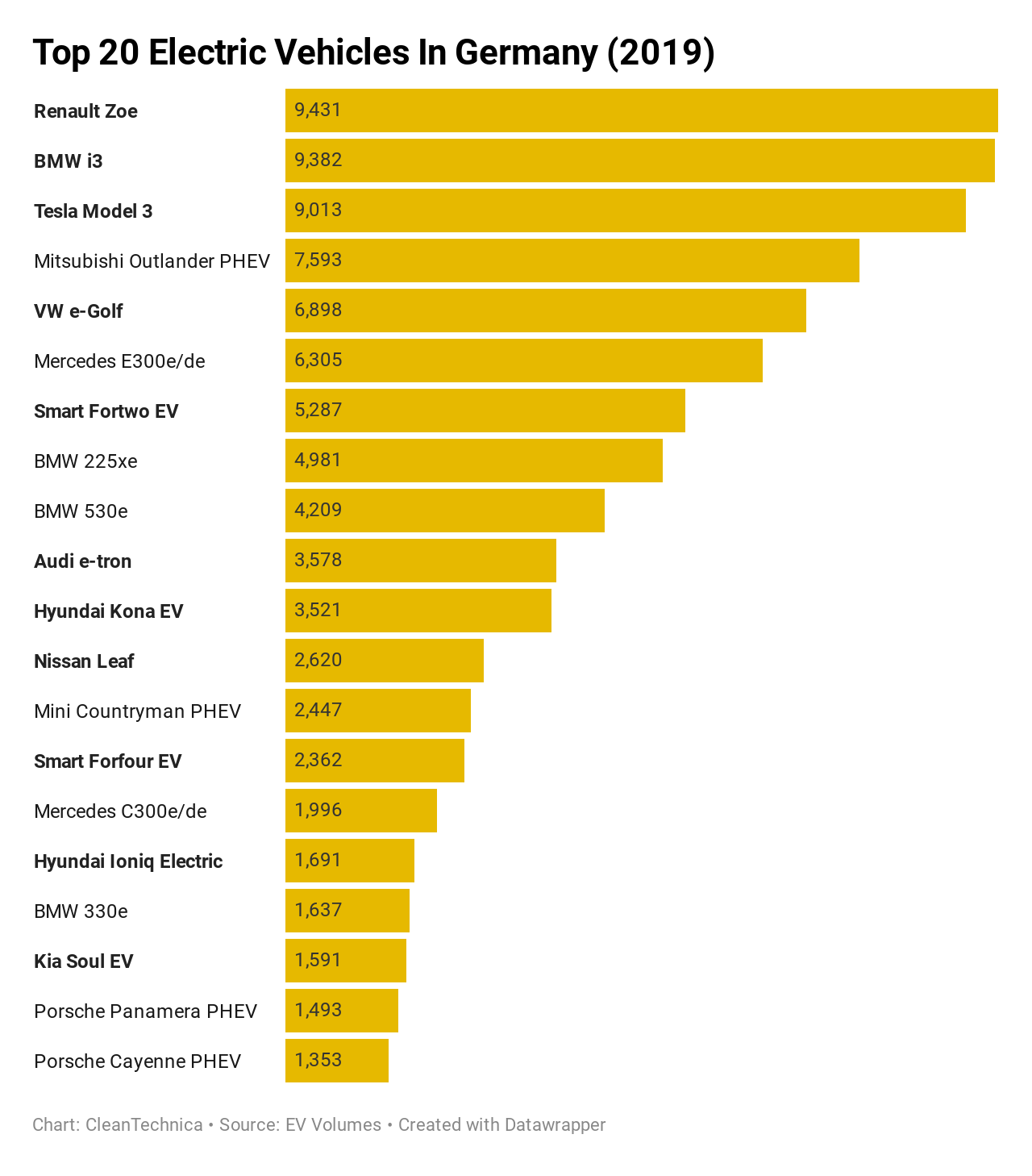 In December, there were some more last minute changes. The Smart Fortwo EV was up one spot, ending in #7, and stablemate Mercedes C300e/de climbed to #15, while the BMW Group also had reasons to smile, with the Mini Countryman climbing to #13, thanks to a record 355 registrations, and the BMW 330e jumping 3 positions to #17, with the German midsizer scoring a record 529 registrations.

Finally, the Porsche Cayenne PHEV joined the ranking in the last month of the year, in #20, with Porsche placing both of its plug-in hybrids in the top 20.

You might ask, “What about the big Teslas?” Well, the Model S scored 114 registrations and the Model X had 89, far from the 964 registrations of the Mercedes E300e/de or the 253 units of the Porsche Cayenne PHEV. However, like the Volvo XC90 PHEV, they are playing on one of the most difficult fields, so it would be surprising if they could beat the local heroes, which highlights even further the outstanding performance of the Model 3 in Germany in 2019.

“And the Taycan?” The electric Porsche registered 31 units, but the sports sedan is still in “demonstration units” mode, so no big numbers here, yet.

The German PEV market is traditionally one of the most balanced and unpredictable out there, but in 2020 a major shift will happen. As the plug-in market will start to get into the mainstream (around 6% PEV share), the boredom stability of the overall market will start to set in, with the main interest being in which month the VW ID.3 will take over the leadership position from the Renault Zoe. My guess is that it will happen between October and November.

Jose Pontes Always interested in the auto industry, particularly in electric cars, Jose has been overviewing the sales evolution of plug-ins through the EV Sales blog since 2012, allowing him to gain an expert view on where EVs are right now and where they are headed in the future. The EV Sales blog has become a go-to source for people interested in electric car sales around the world. Extending that work and expertise, Jose is now a partner in EV-Volumes and works with the European Alternative Fuels Observatory on EV sales matters. 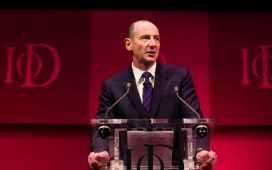 TikTok and WeChat Banned From U.S. App Stores on Sunday 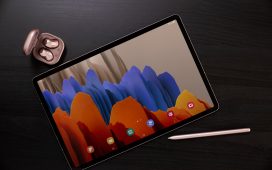 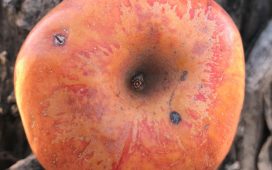 The ‘extinct’ Colorado Orange apple: How a couple on a mission found it 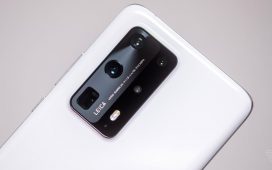 Huawei’s P40 Pro Plus is the smartphone zoom king

https://www.theinternetofallthings.com/category/internet-of-things-news/ – The Internet Of All Things

Mutant virus: should we be worried that Sars-CoV-2 is changing ? | World news