Plug and Play Tech Center is the world’s largest startup accelerator, with more than 2,000 startups going through the organization’s programs last year. It’s also one of the most active investors in the world, investing in early-stage companies globally, according to Crunchbase data.

Given the rapid pace at which the Sunnyvale, California-based firm invests and the global reach of Plug and Play, we thought we’d take a closer look at the firm’s investment strategy and recent bets. The firm in 2021 has already surpassed the record number of exits it set last year, with still about a quarter of the year left.

Crunchbase News talked with Ivan Zgomba, a partner at Plug and Play Ventures, to learn more about the firm’s recent investing pace.

“We do have 15 different industries that we’re very active in,” Zgomba said. “What makes us unique is we have built ecosystems around each industry.”

Plug and Play Ventures is the investment arm of the Plug and Play Tech Center. Its “bread and butter” is pre-seed and seed-stage investing out of a technology-agnostic global fund. Check sizes tend to be between $100,000 and $150,000.

The firm’s investments this year will be split 50/50 between U.S.-based and international companies, Zgomba said.

The firm’s international investments tend to be near Plug and Play’s offices, which number more than 30 worldwide. Lately, it’s had a big presence in areas like France, Germany and the Asia Pacific region.

While the Plug and Play Tech Center is known for its industry-focused and stage-agnostic accelerator programs, it’s unlike typical accelerators where companies go through the program and then receive an investment at the end.

Rather, Plug and Play Ventures makes investments and runs startup programs, but doesn’t invest in all the companies that go through those programs.

“It’s almost separate in the sense that these programs are designed to bring as much value to our companies, whether it’s synchronous or asynchronous, it doesn’t matter,” Zgomba said.

The Plug and Play Tech Center was founded in 2006, but 2013 or 2014 or so was when it began to “roll up its sleeves” when it came to investing in startups. That’s clear in its investment count, which shot up around 2014.

Plug and Play has invested in 146 funding rounds so far this year, with more than a third of them being seed rounds, according to Crunchbase data. Among its most recent investments were the seed rounds for user behavior analysis platform ForMotiv, women-focused social bank Oraan, and edtech startup T-Lab.

Last year, the firm invested in 162 companies with an average check size of $108,000, per its website. According to Crunchbase data, 2018 was the firm’s most active year of the past decade in terms of investing, with Plug and Play participating in 167 funding rounds. 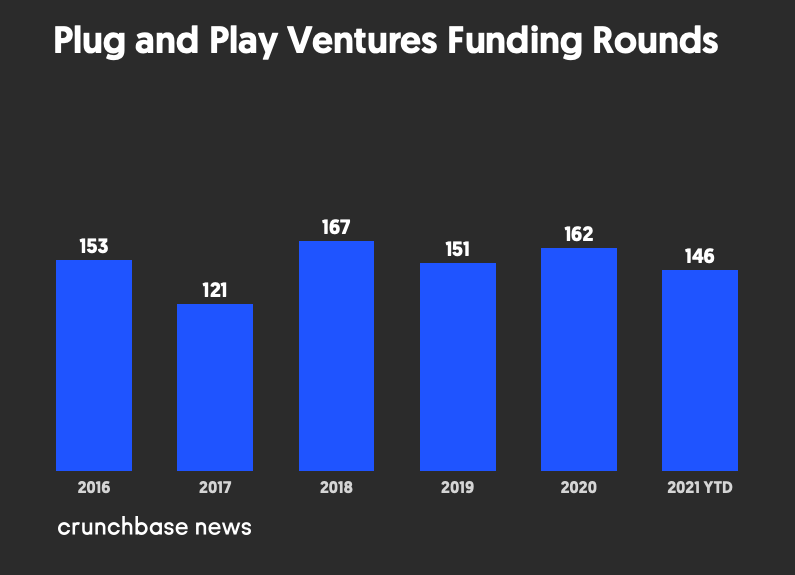 The firm actively invests in around 15 different industries, including smart cities, fintech, insurance, supply chain and logistics, retail, and food and beverage.

About 40 percent of Plug and Play Ventures’ deals are in what they call the “smart money and health” sectors, which includes fintech, insurance, health and wellness. Smart cities, which includes mobility startups, the Internet of Things, and real estate, make up about 25 percent of its investments. The firm also actively invests in supply chain and logistics companies.

“When it comes to the access to the largest global brands, largest corporations in the world, getting those customers, the B2B side, that’s definitely by far one of our biggest strengths (for helping startups),” Zgomba said.

Plug and Play Ventures has seen 21 of its portfolio companies exit so far this year, making 2021 the most active year in at least a decade for the firm in terms of number of exits, per Crunchbase data. Over the course of the firm’s history, it’s invested in companies that exited at  billion-dollar-plus price valuations, including fintech unicorn Honey and insurtech company  Hippo Insurance.

Of this year’s exits, the majority happened through an acquisition. Hippo and biotech company RenovoRx both had public market exits, but the other 19 exits so far this year were all acquisitions. That makes sense, given the increased activity in the M&A market in 2021, particularly for startups. 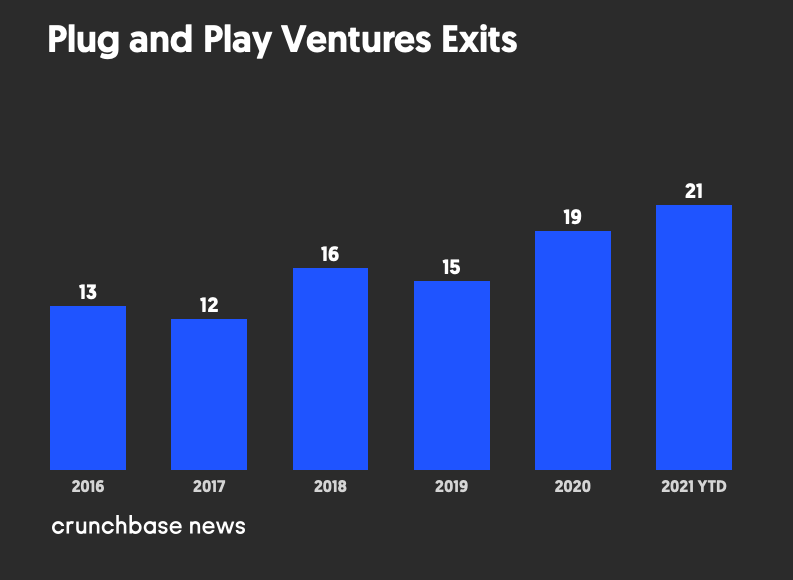 Some notable acquisitions this year of Plug and Play portfolio companies include gaming company Skillz’ $150 million acquisition of  Aarki, and Pluralsight’s acquisition of Next Tech.

Plug and Play Ventures generally takes minority stakes in businesses, around 1 percent to 5 percent, according to Zgomba. Its stakes in the acquired companies is unclear, and the firm wasn’t listed as one of the largest shareholders in Hippo Insurance or RenovoRx in regulatory documents filed with the U.S. Securities and Exchange Commission.

This year’s activity has already broken the record Plug and Play Ventures set last year in terms of number of exits, when 19 of its portfolio companies exited. The firm saw around a dozen of its companies reach the coveted—though increasingly common—unicorn status of a valuation of $1 billion or above in the past 12 months, bringing its unicorn count to 24 companies.

While Plug and Play Ventures usually invests at the earliest stages, the firm stays with its companies until they exit, according to Zgomba.

“We tend to move quickly,” he said. “We do have a process, but that process depends on how quick the round is coming along on the startup’s side. I would say our ecosystem is our biggest strength, our ability to help those companies.” 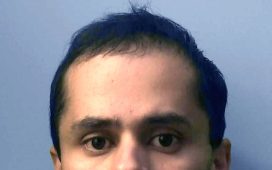 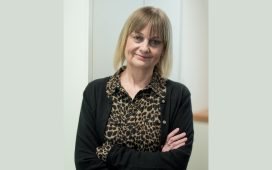 FSA CIO on tech careers: ‘It’s where the future is already happening’ 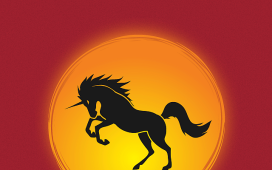 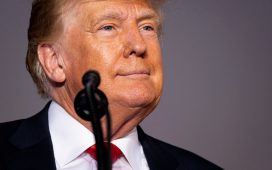