Techregister Logo
Techregister > Autos > Opinion: How excited should we be about the new 911 GT3?
Autos

Opinion: How excited should we be about the new 911 GT3?


Just how excited should we be about this new 911 GT3?

Well, very. There has never been a 911 GT3 that wasn’t brilliant when measured against its contemporary rivals.

Yet had you asked me only five years ago if I thought the 911 GT3 of the 2020s would have three pedals and an atmospheric engine, I would not have been that hopeful. In fact, I probably would have told you we’d be lucky if the seventh iteration of Porsche’s finest driver’s car possessed either of those treasured elements. A forced induction, PDK-only machine genuinely seemed to be on the cards, and for me that isn’t what the GT3 is about.

So confirmation that the new car uses the latest road-ready development of the 9000rpm 4.0-litre flat-six race engine from the GT3 Cup and that Porsche will, if you prefer, pair that unit with a short-throw gearlever and three pedals is excellent news – and, even for someone who couldn’t in his wildest dreams afford this car, also a relief.

Elsewhere, we’ll have to reserve final judgement until we’ve driven it. Kerb weight is only 5kg up on the outgoing model – an impressive feat. However, it’s impressive mostly because the body is now quite a bit bigger than before, and it is the wider tracks and stickier tyres that this 992 shell hides that will affect the GT3’s handling and personality.

Inevitably, the new car will grip harder and generate more stability than its predecessor, which is a characteristic shown to considerable effect by all the 992-generation cars when compared with the 991 (and, to be clear, also reasonable to expect in an industry that operates mainly on hard data points). 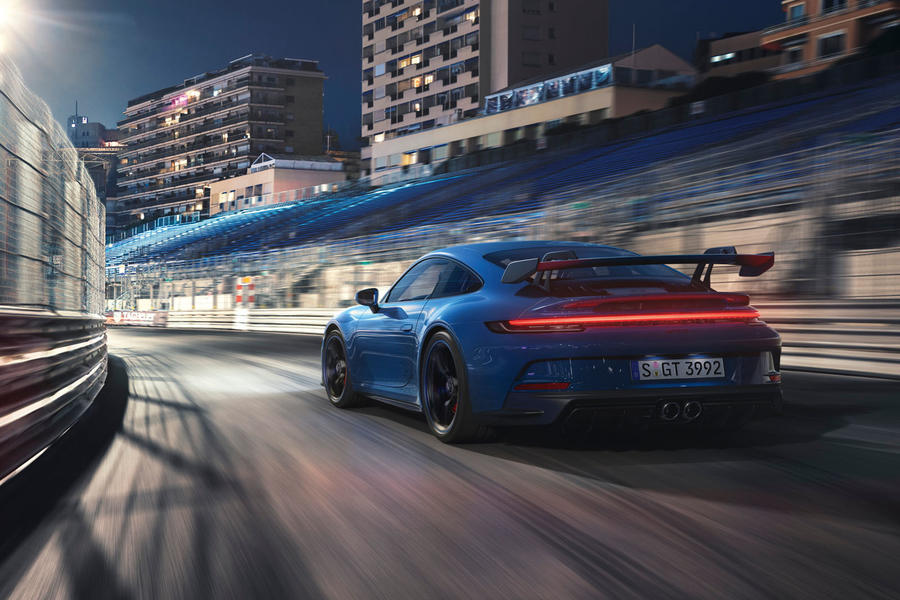 The thing is, to explore the phenomenally engaging rear-biased chassis balance of the old car, you already still had to roll up your sleeves, sometimes to an uncomfortable extent on the road. And this 992 version will surely shift the GT3’s road versus track bias even further towards to the track. Less fun in the real world? Perhaps.

Or perhaps not. Intriguingly, a Porsche GT engineer admitted to me that they thought the regular 992 Carrera felt much too secure. Now, one person’s ‘too secure’ is another’s ‘confidence-inspiring’, but if he and the team have run with that philosophy and developed a car with the duality to be stable as you like on circuit but genuinely adjustable on the road, the new 911 GT3 will be truly scintillating. And my money says they’ve probably achieved that.

The other element I’m curious to experience is the precise nature of the engine note. The sound generated during the final 500rpm of the 4.0-litre in the previous GT3 (the 991.2) really was one of the wonders of the automotive world. It was completely fat-free in tone, but rich, angry, forcefully metallic and arguably more spine-tingling than the equivalent in Ferrari’s modern V12 or the current, titanium-valved Lamborghini V10. In fact, I’m going to nail my colours to the mast and say that it was just that. Better than the Italians. And incredibly cool.