﻿ ﻿Postseason play has arrived and there is an elevated level of excitement on the North Sunflower Academy campus.

Fueling that excitement is that for the first time since 2011, the Rebels will be hosting an opening round football game of the state playoffs.

Taking the field this Friday night at 7 p.m., the 7-3 and No. 6 seeded Rebels will be taking on a 5-4 Christian Collegiate School squad from Gulfport.

The Bulldogs enter the 2A playoffs as the No. 11 seeded team.

The Bulldogs, who have won four of their last five contests, come into this week’s game following last Friday’s 43-33 win over Prentiss Christian School.

Meanwhile, that same night, the NSA Rebels traveled to Columbus Christian School and came back home with a 58-24 decision over the 2-7 Rams.

Friday night’s victory also earned the Rebels’ football program its most wins in a season since the 2016 8-3 campaign.

An added goal for the NSA squad this Friday night will be to get past the first game of their playoff competition; a feat not accomplished by an NSA squad in their six attempts since the 2004 season.

“Columbus Christian battled hard,” noted NSA Head Coach Ricky Smither. “We had to work hard for this win, but got it done.”

As for this week’s playoff opponent, Coach Smither noted “I am very proud of the kids. Coming into the season, they did not have much identity and I am still not sure they know what they are capable of doing. But I think they are getting an idea.”

This Friday’s playoff game also marks the first time the Bulldogs from Gulfport have visited the NSA campus.

Although this will be the third time NSA and CCA have played one another, the past two occasions were also playoff games.  Those events required the Rebels to make the long trek to the Mississippi coast.

Last meeting on a football field in 2016 and 2015, CCA claimed victories in both games.

Whichever team wins this Friday’s opening round of the 2A State Playoffs will move on to round two against Newton County Academy.

That game will be played November 5 in Decatur against the No. 3 seeded and 6-3 Generals, who drew a bye in this week’s opening round.

In their win over Columbus Christian School last Friday, the visiting Rebels found themselves pitted against an inspired Rams squad.

The Rams began the scoring in this game and played the Rebels to a 16-16 score by the end of the first period.

The battle continued throughout the first half and ended with NSA nursing a narrow 24-16 halftime lead.  The game changed quickly in the third period, however, when the Rebels took over the field of play.

Posting three unanswered touchdowns in the third period, the Rebels distanced themselves from the Rams.

The Rebels used various means to score those game-clinching touchdowns beginning with Nick Billhofer’s 40 yard run to the end zone.

Moments later the Rebels punt return unit contributed to the scoring when Quando Townsend took a Rams punt 60 yards back for another touchdown.

The NSA defense then got in on the scoring on the last play of the third quarter. It would be Townsend again scoring as he picked off a Columbus pass and raced 23 yards to the end zone.

Now owning a 46-16 lead heading into the final quarter, the Rebels cruised onto their victory.

Five different players would score touchdowns for the Rebels in this game.

Townsend’s pair of scores was matched by Brandon Daniel’s 80 yard and four yard runs from scrimmage.

Pulling in both passes from Corey Coleman, the plays covered 65 and 60 yards respectively.

Offensively, the Rebels ground game was led by Williams’ 11 carries for 153 yards.

Daniel also passed the century mark as his seven rushes generated another 121 yards of offense.

Close behind was Williams with three solo tackles and nine assists. 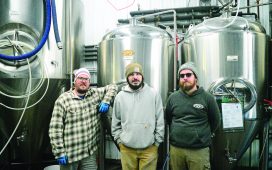 The birds and the beers | News, Sports, Jobs