A mob of people stormed the US Capitol on Wednesday as weeks of President Donald Trump’s unfounded claims the 2020 election was stolen boiled over into a display of insurrection. The chaos, which included multiple reports that shots had been fired, came as Congress was assembled in the building to affirm the election’s results.

Trump, who had spoken to a rally of supporters nearby, stirred up his fans, telling them “We will never give up, we will never concede.” The president also used Twitter to attack Vice President Mike Pence, who had earlier issued a statement saying that he couldn’t stop the congressional count of electoral votes, which is mandated by the Constitution.

“Mike Pence didn’t have the courage to do what should have been done to protect our Country and our Constitution,” Trump tweeted in a statement that falsely claimed fraudulent votes were certified by the states. “USA demands the truth!,” he continued. Twitter initially labeled the tweet as disputed, noting that users can’t reply to, retweet or like the tweet “due to a risk of violence.” The tweet is no longer available along with two other tweets Trump posted on Wednesday.

Congress affirmed Biden’s victory over Trump early Thursday after the House and Senate rejected GOP efforts to throw out Georgia and Pennsylvania’s electoral votes for Biden.

Trump, who lost the US presidential election to former Vice President Joe Biden, has been using Twitter and Facebook to push baseless claims about election fraud to his millions of followers. The companies have labeled several of Trump’s tweets and posts, but critics say those efforts do little to stop the spread of misinformation that could incite violence. On Wednesday, however, both companies took harsher action.

In a rare move, Twitter locked Trump’s account and said it required removal of three tweets that violated its rules regarding elections and other civic processes. “If the Tweets are not removed, the account will remain locked,” Twitter said in a tweet. Twitter also added that Trump’s account will be permanently suspended if he violates the company’s rules again.

Social networks have typically been reluctant to remove Trump’s posts though politicians aren’t exempted from their rules against inciting violence. In the past, Twitter has added a notice to Trump’s tweets but allowed users to view his remarks because of public interest.

Facebook, which exempts politicians from fact-checking, also added labels to several of Trump’s posts directing users to its election information center before removing them. In a blog post, Facebook said it would also remove content that praised the storming of the US Capitol, and calls to bring weapons to protests or for protests that violate D.C.’s 6 p.m. ET.

By the time the social networks acted , however, Trump’s posts had already garnered a lot of views. A Trump video that repeated false claims about election fraud but urged rioters to “go home now” racked up more than 13 million views on Twitter before its was made unavailable. Facebook and Google-owned YouTube pulled down the video.

Facebook’s VP of Integrity Guy Rosen said in a tweet the company removed Trump’s video because “we believe it contributes to rather than diminishes the risk of ongoing violence.” YouTube cited a policy of removing any new videos alleging fraud in the 2020 presidential election, as Trump’s video did. YouTube put the rule in place a month ago and essentially categorized Biden’s victory as historical fact. YouTube said it would allow copies of the video to remain up if they’re presented in the context of “sufficient educational, documentary, scientific, or artistic value.”

The White House didn’t respond to a request for comment.

Stay in the know. Get the latest tech stories from CNET News every weekday.

“Time is now to suspend Trump’s account,” Citron tweeted. “He has deliberately incited violence, causing mayhem with his lies and threats.”

Twitter said in a statement it will take action against tweets that violate its rules. “Let us be clear: Threats of and calls to violence have no place on Twitter, and we will enforce our policies accordingly,” the company said. (Its tweets referencing the events in Washington, D.C. can be found here.)

Facebook, which likewise has rules against inciting violence, also faced criticism for allowing Trump and his supporters to push false claims of voter fraud on its site. Christopher Wylie, the whistleblower in Facebook’s Cambridge Analytica scandal, tweeted the violence that broke out at the US Capitol was an “inevitable manifestation of the conspiracy, vitriol and hate fed to people daily on Facebook.”

Biden addressed the nation just after 4 p.m. ET, calling the attack an “assault” on democracy that “borders on sedition.” He also called for Trump to appear on national TV to denounce the mob’s actions. “President Trump, step up,” he said.

A woman who was being treated for gunshot wounds on the Capitol grounds was later reported to have died from her wounds.

CNN showed scenes rioters bashing in windows and scampering through them. In photos, the pro-Trump mob milled in the Capitol Building, mugging with statues and entering legislators’ offices.

Members of the House of Representatives and the Senate had gathered Wednesday to count the electoral votes transmitted by the states to Washington. Trump and some lawmakers sought to use the process, which is usually ceremonial, to challenge the results of the election. The president had pressured Pence, who presides over the process, to support his unfounded claims the vote was stolen.

Hours before the vote count began, Trump tweeted that states wanted to correct their votes and repeated bogus claims of “irregularities and fraud.” He called on Pence to send the votes back to the states. “Do it Mike, this is a time for extreme courage!” he wrote in a tweet that was labeled as disputed. 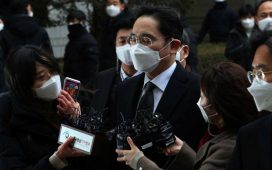 Samsung is set to emerge stronger from scandal

How to Browse Vi Recharge Packs by Pack Type