Smart displays are settling into the tech scene nicely following on from the Amazon Echo Show. After a bit of a wait, we now have Google powered rivals from third parties. The JBL Link View is one and it’s got a lot to offer.

A smart display is essentially a smart speaker but with a screen so you can interact with it visually as well. For a lot of situations, this is way better than just hearing an audio response. Interest has been sparked by the likes of the Google Home Hub and Echo Show 2.

While some smart displays, like the Home Hub and Echo Spot, cost just over £100, the JBL Link View is a more premium option.

Still, this is cheaper than a lot of wireless speakers you can buy so getting the display as well as other features means it’s not an outrageous price at all. You can buy it from Very and Littlewoods but it’s cheapest if you go direct to JBL. In the US you can also go to JBL, or Amazon.

Check out our chart to see all the best smart displays.

While most smart displays, apart from the round Echo Spot, are chunky square/rectangular shapes, the Link View has a more distinctive design. It’s like a rugby ball (or American football if you’re in the US) cut in half, albeit a slightly squashed ball.

The screen sits at a slight angle (non-adjustable like others) with speakers on either side covered by fabric. At the back is a shiny bass radiator, switch to mute the microphones and a volume rocker. 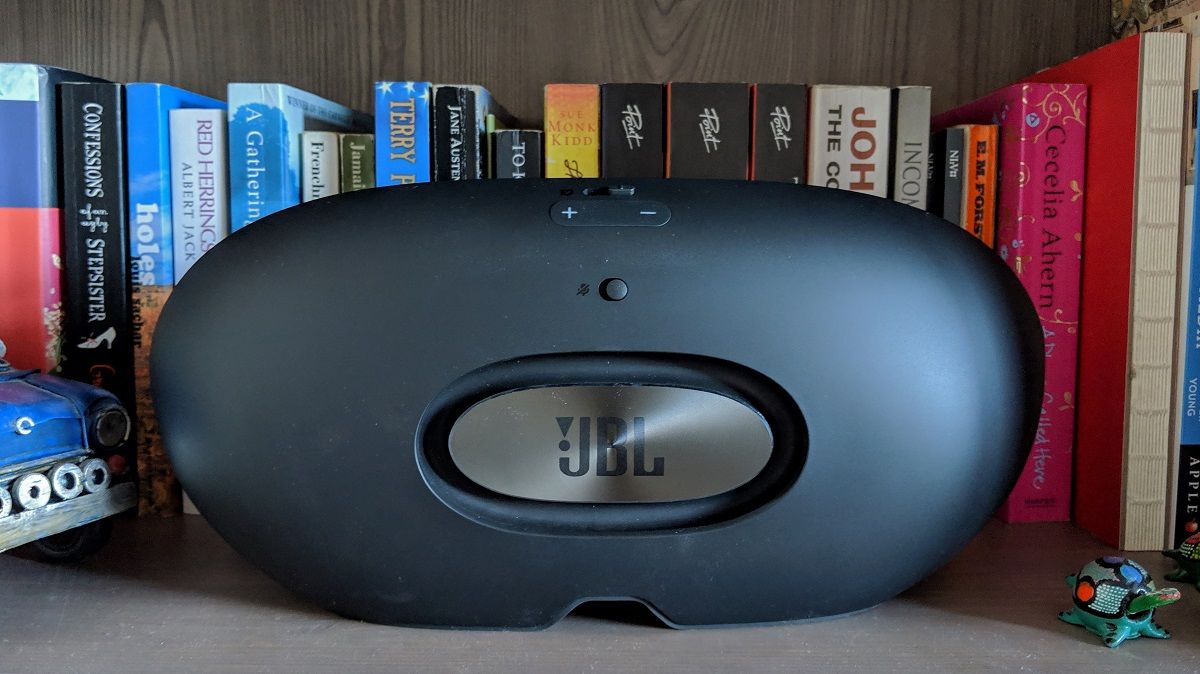 You’ll have noticed the camera on the front which is flanked by microphones. If privacy is of concern, the slider at the top moves a physical cover in front of the lens – it’s orange so you know easily whether it’s there.

There’s little else to say about the design apart from that the device isn’t too big or heavy so should fit in any room in the house. A rubber base stops it sliding around and it’s IPX4 splash proof, which is handy if you want it in the kitchen.

Perhaps the only shame is the lack of colour choices, as the Link View only comes in black. 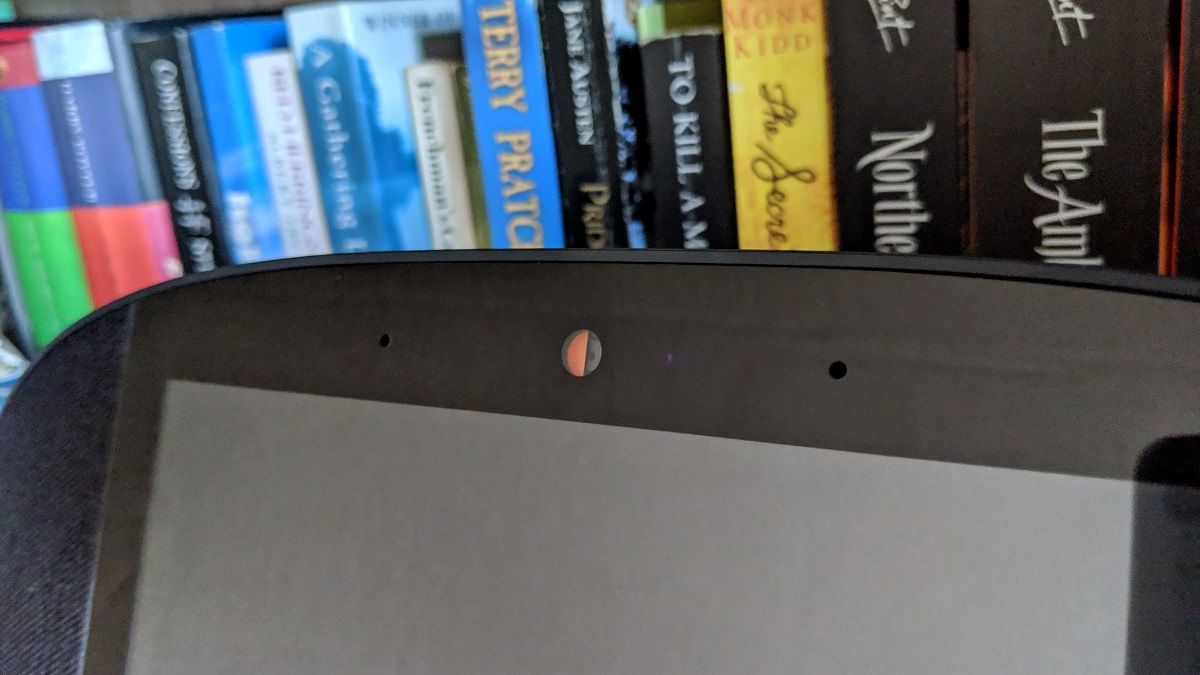 The screen on offer here is 8in so only an inch bigger than the Google Home Hub, yet it feels like a significant amount in use. It matches the Lenovo Smart Display, which also comes in a 10in model if you want a larger screen.

We’d like a Full HD resolution – it is 2019 after all – but HD on an 8in screen doesn’t look too bad. The display has a decent amount of brightness and colours are good, but it can’t match up to Google’s with its ability to cleverly adjust the temperature.

The touchscreen is fairly responsive but we’d like it to be a little quicker. The Link View is also a little slow as responding at time, such as skipping a track when using Spotify. This can be a little frustrating. 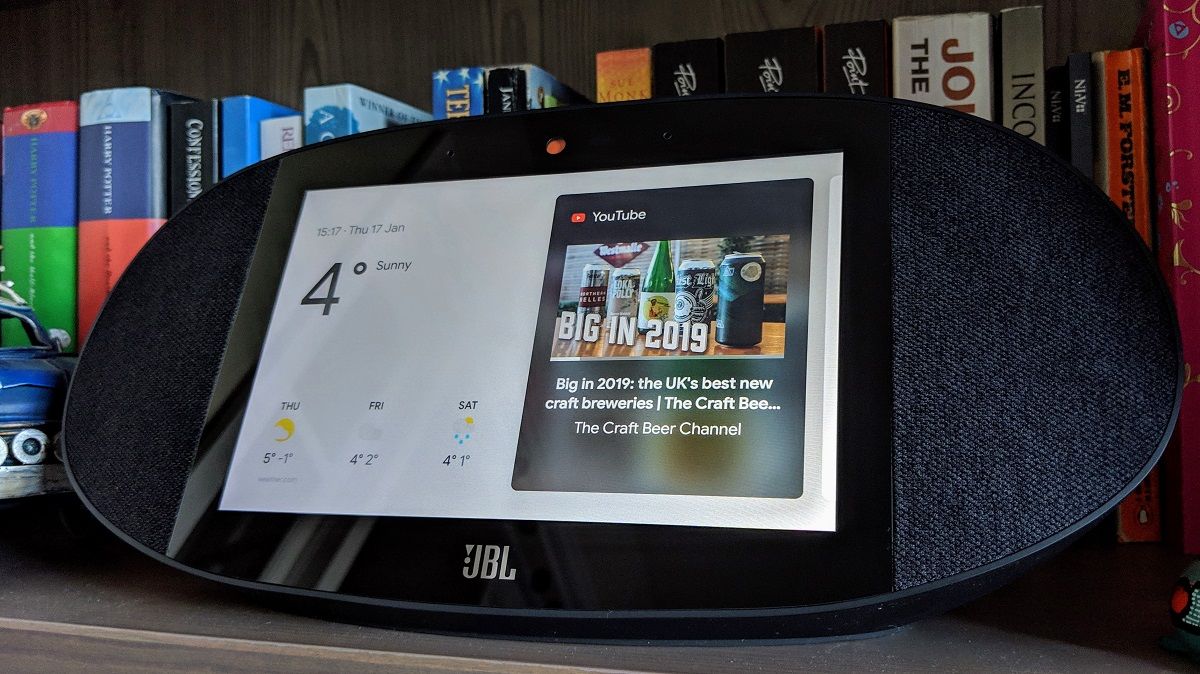 Audio is the star of the show here, with those aforementioned front facing drivers and rear bass radiator. The drivers are 2in and the Link View offers a large frequency response of 60Hz-20kHz.

A total power of 10W RMS is a little deceiving here as the speaker has oodles of oomph on this front. In fact, raising the volume over 5 (out of 10) is too loud for most situations. It sounds great at low to medium volume but does get distorted at the higher end.

Although you can just deliberately avoid pushing the volume too high, it’s a shame that you can’t adjust the EQ of the Link View like you can with the Google Home Hub. This seems a little backwards. Still, this is the smart display to buy if you want the most powerful audio. 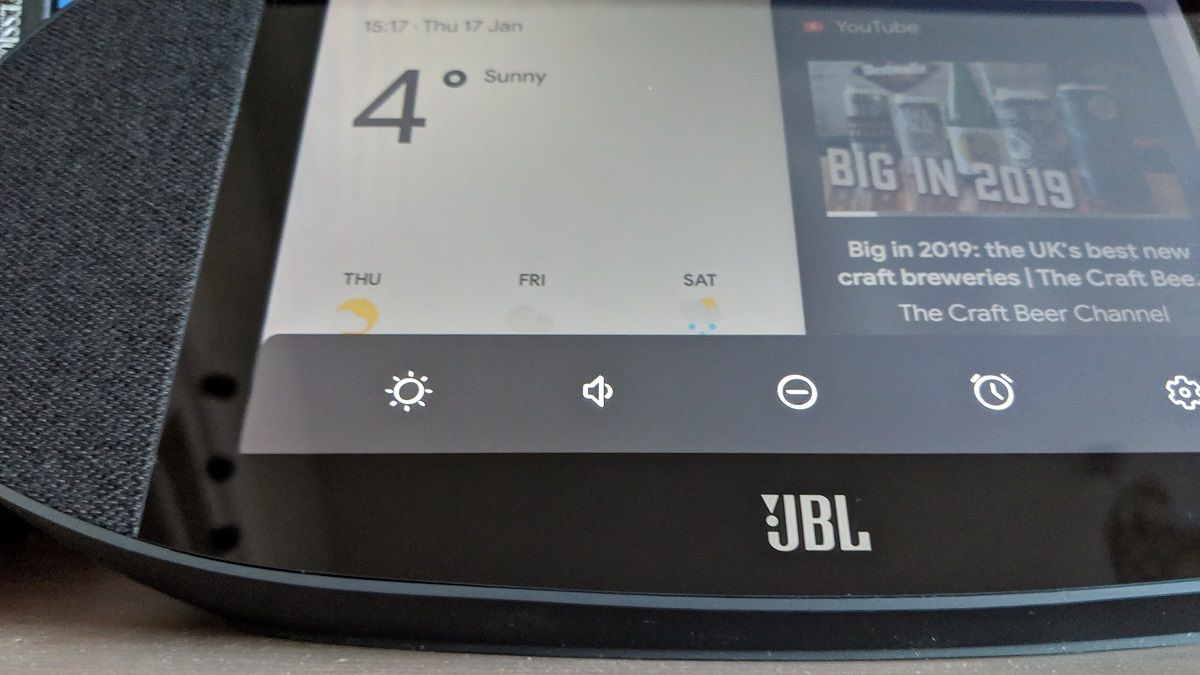 Being powered by Google, the JBL has Chromecast built-in so you can use it to cast music, podcasts, YouTube and more from your phone. You can’t use it as a screen for things like Netflix, though.

In addition, it has Bluetooth 4.2 if you want to connect like that.

What the Link View has over the Home Hub is a camera. The 5Mp snapper at the front means you can video call contacts who have Duo set up easily. You get a nice wide-angle view and in our tests both video and audio quality were decent enough.

When it comes to the rest of the software, it’s the same as the other Google Assistant smart displays. As it stands, there are good and bad things about it. 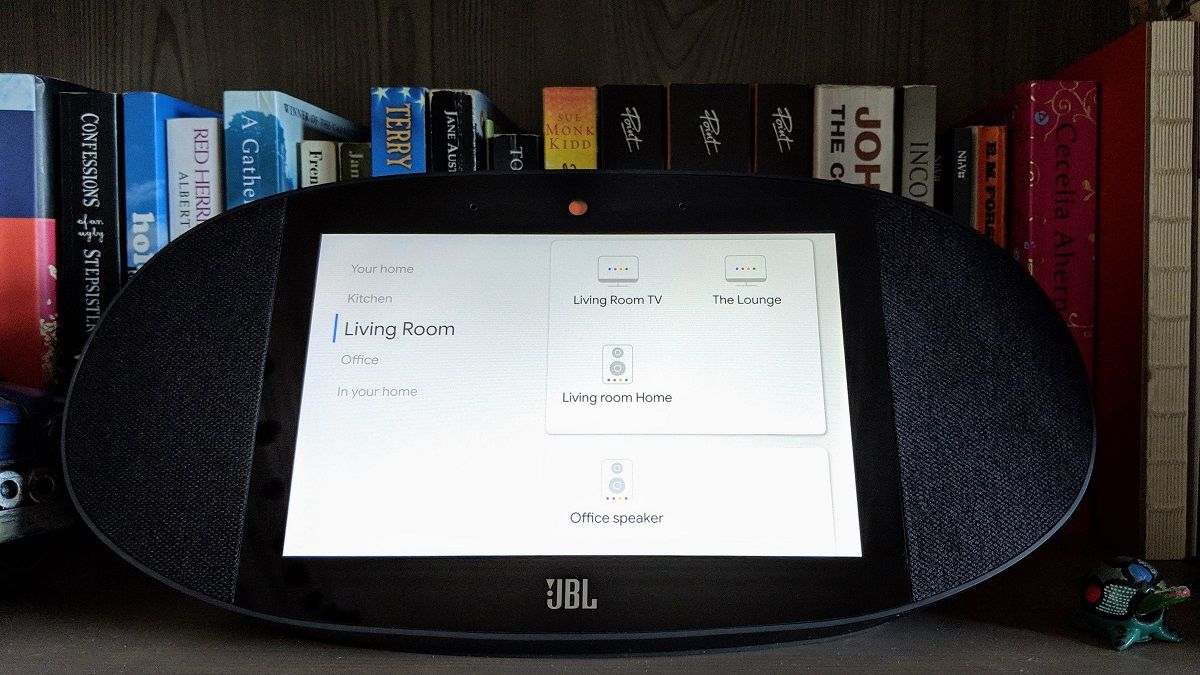 What you don’t want to do is buy one thinking it’s just Android inside a speaker. It’s a custom interface, based around the digital assistant. This means you’re largely expected to interact with your voice. You can use the touchscreen, of course, but you’re often just told to use a voice command even if you do.

The visual element is handy in a number of ways, not least because it can show what you have on Google Photos making it a digital photo frame when not in use. This is really nice if you take a lot of snaps on your phone but never find the time to do anything with them.

There are plenty of other things you can do such as check the weather, your commute, calendar and control smart devices around your house. Still, a lot has to be done from the Google Home app on your phone which is a shame considering these smart displays have a, er, display where you might expect to do more. 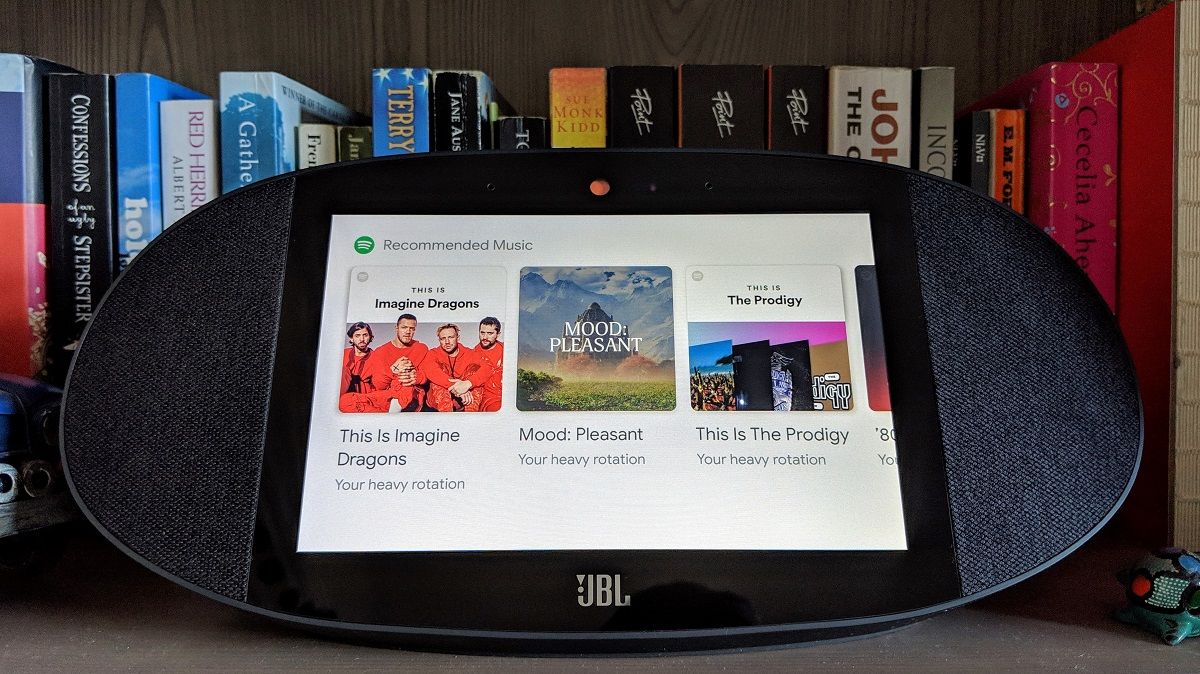 You’ll need the Home app to set up routines, for example, which allow you do various things with a single command. For example, you can say ‘good morning’ to get the weather, your commute time and a calendar overview for the day. Voice interaction has some way to go before we can create things like that without needing an app, then.

These are small things, but they can be annoying at times. Luckily software can be improved so we hope Google can make things better over time.

The JBL Link View might be the most expensive smart display we’ve tested to date but it’s the one you need to buy for the best and most powerful audio. It’s got so much oomph that you’ll probably won’t need to go over level 6 out of 10.

We like the slightly quirky design, which will fit into any room in the house. It’s just a shame it only comes in black.

You get a decent 8in screen and a camera for video calls, too. Generally everything works well apart from the odd bit of lag and the caveats we have with Google’s software – namely it’s over reliance on the Home app, so you can’t just leave your phone behind ones the display is up and running.

Ghost Of Tsushima Review [No Spoilers]: One Samurai vs The Mongol Horde

A budget soundbar that packs a punch- Technology News, Firstpost