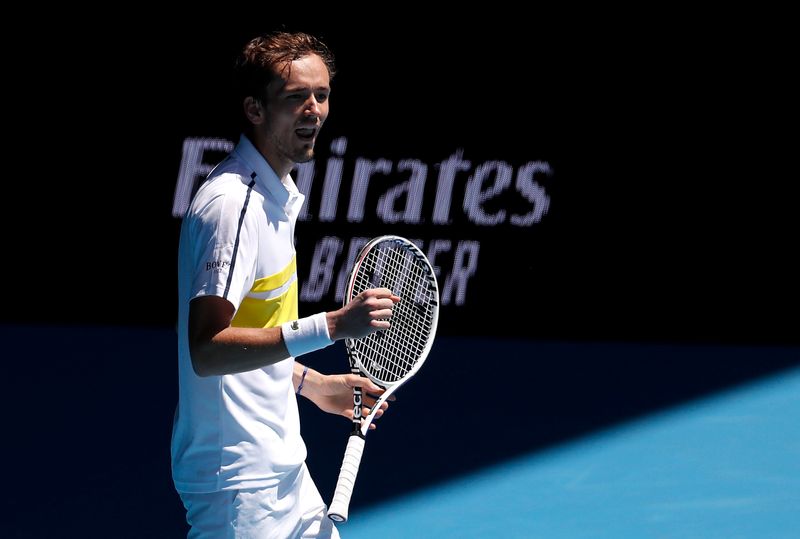 MELBOURNE (Reuters) – Russia’s 16-year wait for a men’s Grand Slam singles champion may not come to an end next Sunday but you would not bet on it lasting too long after Daniil Medvedev, Andrey Rublev and Aslan Karatsev reached the last eight of the Australian Open.

Fourth seed Medvedev and seventh seed Rublev joined qualifier Karatsev in the quarter-finals on Monday, an unprecedented concentration of Russians at that stage of a Grand Slam in the open era.

“It’s amazing,” Medvedev laughed on Monday when word filtered through to his news conference that Rublev’s fourth round opponent had retired.

“It’s definitely one Russian in the semis, three Russians in the quarters … It’s great for our sport.”

Marat Safin was the last Russian to reach the Melbourne Park men’s semi-finals on his way to the title-decider in 2005, when he beat Lleyton Hewitt to match compatriot Yevgeny Kafelnikov’s tally of two Grand Slam titles.

Medvedev has looked most likely to make the Grand Slam breakthrough over the last couple of years and extended his impressive winning streak to 18 matches with Monday’s victory over Mackenzie McDonald.

To break the Russian drought in Melbourne this year, however, he will have to get past Rublev in a mouth-watering quarter-final on Wednesday.

“It’s going to be new story, new match, we’ll see how it’s going to be,” said Rublev, who has an 0-3 record against his friend after losing their 2020 U.S. Open quarter-final.

“Of course he knows my game, I know his game, but in the end you still need to face each other to see the reality, to see the atmosphere, to see how the things are working or not working, how you’re feeling, and then you adapt.”

The trio teamed up two weeks ago to win the ATP Cup in Melbourne, which could be an omen for the more superstitious-minded given Novak Djokovic backed up Serbia’s triumph in the competition last year with his eighth Australian Open title.

Karatsev played only doubles as Russia stormed to victory but his story is the most remarkable of the three quarter-finalists.

The 27-year-old battled through qualifying just to get into his first Grand Slam main draw before beating seeds Diego Schwartzman and Felix Auger-Aliassime on his way to a quarter-final against Grigor Dimitrov.

He is the first man since Alex Radulescu at Wimbledon in 1996 to reach the last eight of a Grand Slam on debut and, as world number 114, the lowest ranked player to reach the Australian Open men’s quarters since 1991.

“We are both really happy for Aslan, because he was practicing good in ATP Cup,” said Medvedev.

“We felt like he could do something amazing. To be honest, being in your first Grand Slam main draw and making quarters is something exceptional. He’s not over yet.

“Let’s see how he does tomorrow.”

Disclaimer: Fusion Media would like to remind you that the data contained in this website is not necessarily real-time nor accurate. All CFDs (stocks, indexes, futures) and Forex prices are not provided by exchanges but rather by market makers, and so prices may not be accurate and may differ from the actual market price, meaning prices are indicative and not appropriate for trading purposes. Therefore Fusion Media doesn`t bear any responsibility for any trading losses you might incur as a result of using this data.
READ  Be wary of scapegoating ‘just-in-time’ supply chains