‘I like to infiltrate the brains of the nation’: CBeebies’ Andy Day, Britain’s favourite babysitter | Television & radio


Andy Day is defending his patchy record as a time traveller. “I understand the worry out there,” he says, his voice frantic with reassurance. “But it’s all right. It’s going to be OK. I’ve covered my tracks well, I think.”

Only a fool would believe him. As the star of CBeebies’ Andy’s Dinosaur Adventures, Day has travelled back in time more than most, and to say that this has caused consternation among the nation’s parents would be a criminal underestimation. In each episode, Andy, who works in a museum, will suffer a mishap – maybe he will break a dinosaur egg – before deciding that the only way to remedy it is to travel all the way back to age of the dinosaurs, steal a real dinosaur egg from its actual mother and then return it to the museum.

I have watched every episode of Andy’s Prehistoric Adventures multiple times, and I’ve waited years to ask him one question: why? Why not just travel back in time to before the egg got smashed and take better care of it, rather than risking the fate of humanity by going back millions of years?

“I’m not doing it just for fun,” he stammers unconvincingly from his home in Bristol. “I’m doing it for educational purposes. I’m taking responsibility. I think that’s the most important thing.”

I want nothing more than to bring Day to justice for his callous abuse of the time-space continuum. However, I know that if I did, my children would kill me. The longest-serving presenter on CBeebies, Day has spent almost a decade and a half as the nation’s unofficial babysitter. Tall, curly-haired and boundlessly enthusiastic, Day is an immovable mainstay of the channel. He brings a spirit of playful authority to his time on screen, a willingness to jump in two-footed to any new situation. Plus, he sings his own name a lot.

“Listen, I didn’t plan for that,” he protests. “That just happened.” Then, he relents. “I like to try to infiltrate the brains of the nation”, he admits. “‘Andy, Andy, Andy.’ It’s actually a hypnosis.”

Day’s latest effort is a very sweet show entitled Andy’s Dino Toybox, where he simply plays with dinosaur toys. The series has been made as a direct response to Covid. Like Steph McGovern and Romesh Ranganathan before him, Day found himself producing it from his own house.

“Do you remember Mrs Doubtfire, when he’s playing with the dinosaurs?” he asks. “I always thought that would be a great idea for a series. Just really simple, old-school kids’ TV, me playing with dinosaurs, giving them knowledge. Then obviously lockdown hit, and it was perfect because, in terms of budget, it costs a lot less than most shows. My other half, Kat, is a producer and director [the pair met on Andy’s Prehistoric Raps], and she’s very easy to work with, which is brilliant.”

One potential hitch, however, came in the form of Ruby, the couple’s two-year-old daughter. “The only way we could do it was obviously shooting at night, when we’d put our little one down,” he says. “Every Monday, Wednesday and Friday, we’d start filming at roughly eight o’clock after we’d put her to bed, and finish at roughly 11 o’clock. Three and a half hours to make an episode. There was one night that we couldn’t film because her molars were coming through. We were just like: ‘Ah, we’re not going to do this, let’s sack it off.’ Then the next day we ended up doing it at lunchtime.”

Despite this, fatherhood appears to be working out well for Day. “I could talk all day about being a dad,” he says. “It is great. She’s a great little character, and we have a lot of fun. I get to be stupid and just play along, and all the things that I do on CBeebies anyway.”

Has having a child changed the way he broadcasts to children? “Whenever I’m presenting, I always imagine that I’m speaking to one child, and it’s usually a six-year-old,” he says. “Now, I have Rubes, and I do picture Rubes a bit more. Before I had kids, I’d met a lot of kids, and I’d communicated with kids, and entertained kids, but there’s nothing like the experience of having an actual kid and understanding a bit more where they’re coming from.”

There was a minor storm earlier this year when the BBC’s chair, Sir David Clementi, warned that replacing the licence fee with a Netflix-style subscription model could potentially put an end to CBeebies. As a face of a channel that could be at risk, how did he react to the news?

“I never worried because I think the things that last are the things that are useful,” he says. “CBeebies is a very educational, fun, safe place for parents to put their kids. It could eventually go down the road of being more online, but I still think it will be around. There’s still a purpose for it. And I think kids and parents alike will still love watching it. I just can’t see it going any time soon.”

The entire television landscape has changed vastly since Day began on CBeebies. In his early days, he recalls, “the links from the CBeebies House were a lot longer, and it was a lot more structured in some ways”. Now, the popularity of iPlayer means that many kids are accessing the shows directly, which means the connective tissue of the CBeebies House is less important. Not that he seems worried, though. “I love being in preschool TV,” he says. “I’ve done some grownup TV, some entertainment, and I would choose children’s TV over it any day.”

Which raises the question: after 14 solid years at the preschool coalface, does Day have an exit strategy in mind? He starts to answer, only to endearingly get lost in a defence of preschool telly as a medium.

“There was once a time when children’s TV was not always very popular,” he begins. “There was always preschool TV, but it wasn’t as big a thing as it is now. But now it has become a very important market. And it should be. For some kids, our shows teach them the ways of the world. They get to experience things that they otherwise might not, because of their situations or whatever.”

He stops. “What was the question again?”

Do you ever want to leave CBeebies?

Before I go, I have just enough time for one final question. Who made you the sole arbiter of time travel? You have this incredible power, and yet you chose to keep it to yourself. What kind of man are you?

“You’d want to share time travel?” he splutters with indignation. “Everyone would want a go. There’d be an absolute uproar. People would be knocking down the doors to get into the museum. There’d be another pandemic.” He shakes his head, resolute in his stance, ever the cool older brother. “I can’t have that.”

Facebook Begins Roll Out of Dark Mode on its Mobile App 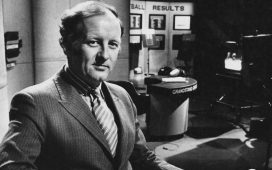