Team Edison, the EV-focused team at Ford’s Corktown facility, in downtown Detroit, was responsible for helping conceive the vehicle that became the 2021 Ford Mustang Mach-E and essentially chaperone it through Ford’s vehicle development channels in Dearborn to production, delivery, and support.

Early this year, Team Edison leader (and global development director for EVs) Darren Palmer gave Green Car Reports a very good idea of what Mach-E was going to be and how it fits into Ford’s future. A couple of weeks ago at the LA show we wanted to dive a little deeper into core decisions in vehicle development—and for that, we arranged to sit down at the Ford stand with Ron Heiser, the chief program engineer for Mach-E, to talk details. 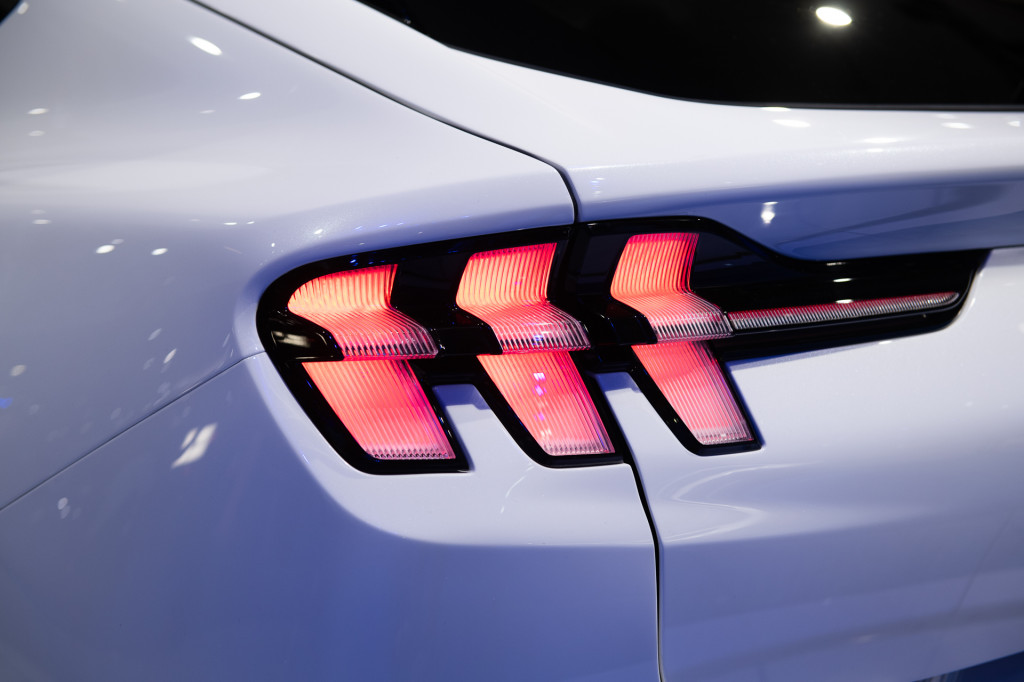 There’s an unusual, unavoidable origin story for understanding why the Mach-E project is what it is—which we provided a tease of in our preview of the 2021 Ford Mustang Mach-E. It started out four years ago as a front-wheel-drive car. In 2017, as part of a comprehensive review ordered by then-new CEO Jim Hackett, the proposed electric car already under development wasn’t discarded but radically rethought—and given an about-face as a rear- or all-wheel-drive project.

“I think we were going to build a very, very nice car that technically we would have been proud of, but I don’t think it would have had the emotional pull that we have with this car,” summed Heiser when asked about the abrupt change in course.

Focusing in on Mustang, starting in 2017

Specifically, in 2017, although the car was by no means confirmed as part of the Mustang family, it looked to the Mustang for inspiration. The wheelbase got a little bit longer versus that initial car for two reasons, Heiser said. One of them was to get the packaging of the big rear motor right (requiring a complete redo of the rear suspension), and the other was to make the proportions fit in alongside rear-wheel-drive vehicles—and the rest of the Mustang lineup.

It ended up being all about setting the “dash-to-axle” distance to get “the sports-car Mustang imagery.” That set the base of the windshield father forward and gave the vehicle a longer hood. The original car had super-short overhangs, and they kept those. 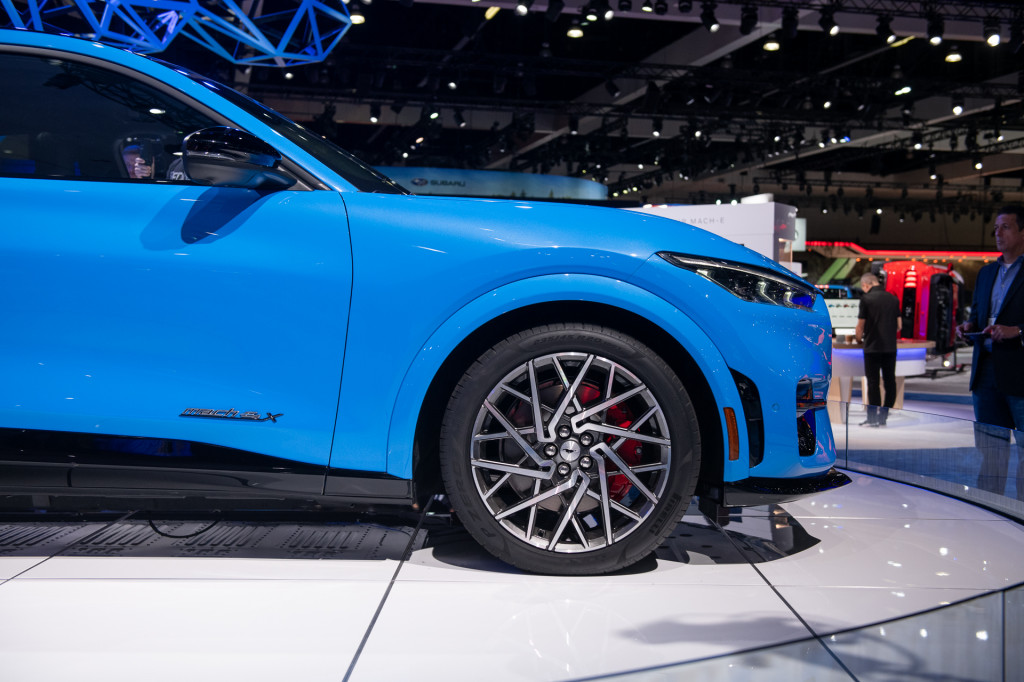 Heiser said that the dash-to-axle ratio of the original project was closer to that of an Escape, which meant a very narrow distance of fender behind the front wheel. The Mustang Coupe and Convertible—and the Mustang Mach-E—on the other hand have a lot of dash-to-axle. “So it’s giving you that sports-car proportion.”

Making the vehicle fundamentally rear-wheel drive and more performance-oriented completely changed the performance level of the project, too. While the current base car has base specs of 255 horsepower and 306 pound-feet of torque. “When the vehicle was front-wheel drive, we would have been a little bit less than that, maybe,” said Heiser—and likely without the high-performance variants.

Certain things were always locked in from the start of the project, whether that be the Mach-E or the more milquetoast electric SUV they started on.

In December 2015, Ford announced that as part of a $4.5 billion electrification push it was developing a battery electric SUV capable of a 300-mile range for arrival in 2018. This is that vehicle, just revamped. 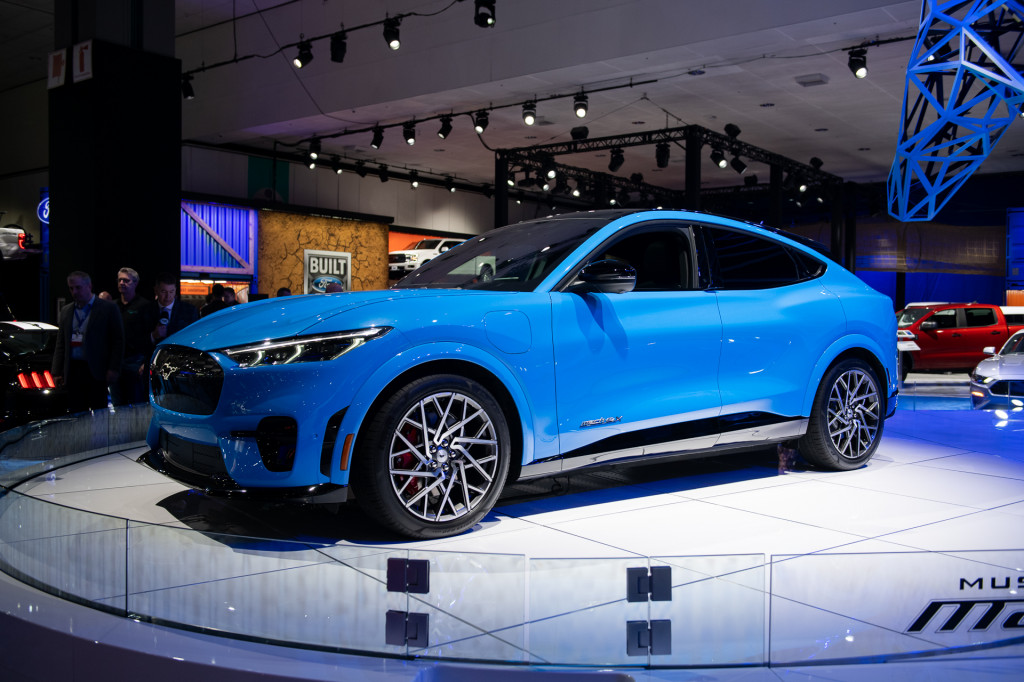 Heiser says that once the 300-mile target was set, the dedicated electric architecture that the Mach-E is engineered on was a given. “First of all, you’re going to put that (large) battery between the rockers, it’s going to really define a lot of elements of the vehicle architecture—like the wheelbase for instance,” he said.

Because Ford wanted to prioritize crash safety, it also set a goal early to have a battery structure that’s not redundant to the body structure, Heiser explained; they work in tandem.

The potential to base other vehicles from this same platform was another reason. “We were definitely at the beginning engineering a platform,” said Heiser. “We knew we had to have scalability…and the platform is scalable.”

To expand the discussion, we hit a number of other points with Heiser that paint more of a picture about why the Mach-E is what it is—and what to expect beyond the talking points and releases issued so far:

Track time isn’t the priority. “We engineered this vehicle on the track, but we didn’t necessarily engineer it for the track,” said Heiser. “The emphasis was more about having fun on the road…For 50 years that has been a big part of Mustang.” 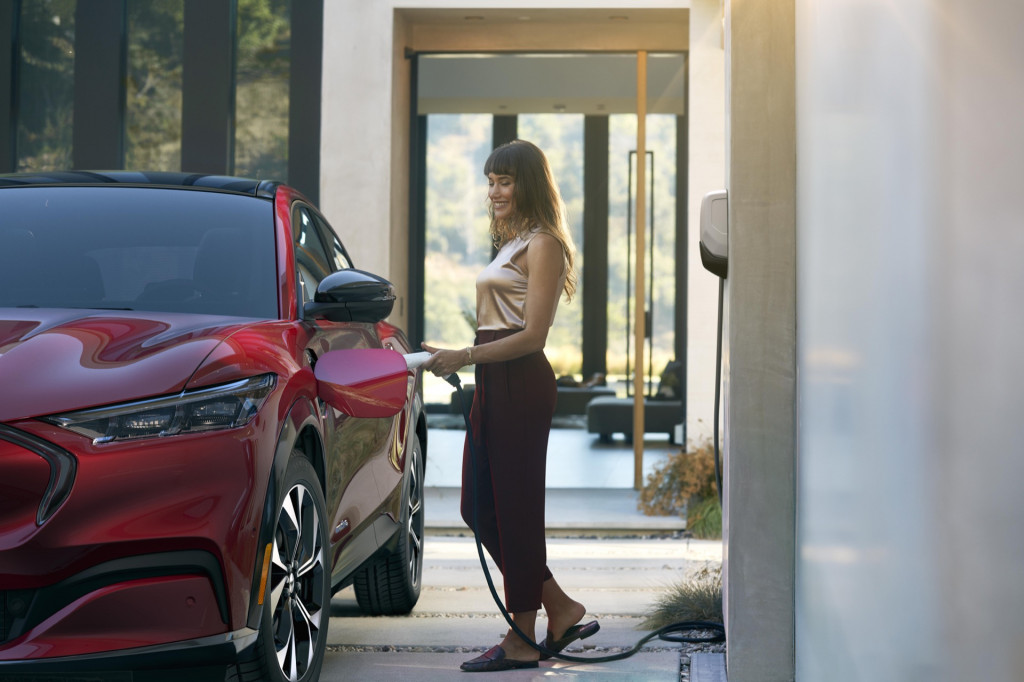 Mach-E will charge at 150 kw—briefly. Early materials about the Ford Mustang Mach-E haven’t been entirely clear if that vehicle will fast-charge at 150 kw, or whether it just needs 150-kw fast-charging hardware to charge at its peak rate somewhat less than that. Heiser verified that it indeed does charge at 150 kw, but only for a small window of time and state of charge. “At our price point it’s a position of strength,” Heiser said.

The Mach-E doesn’t have a heat pump. Like Tesla vehicles, the Ford electric vehicle skips it entirely, and Heiser hinted that it’s added complexity that might have gotten in the way. “We felt it would be better to put our emphasis on getting the battery range.” 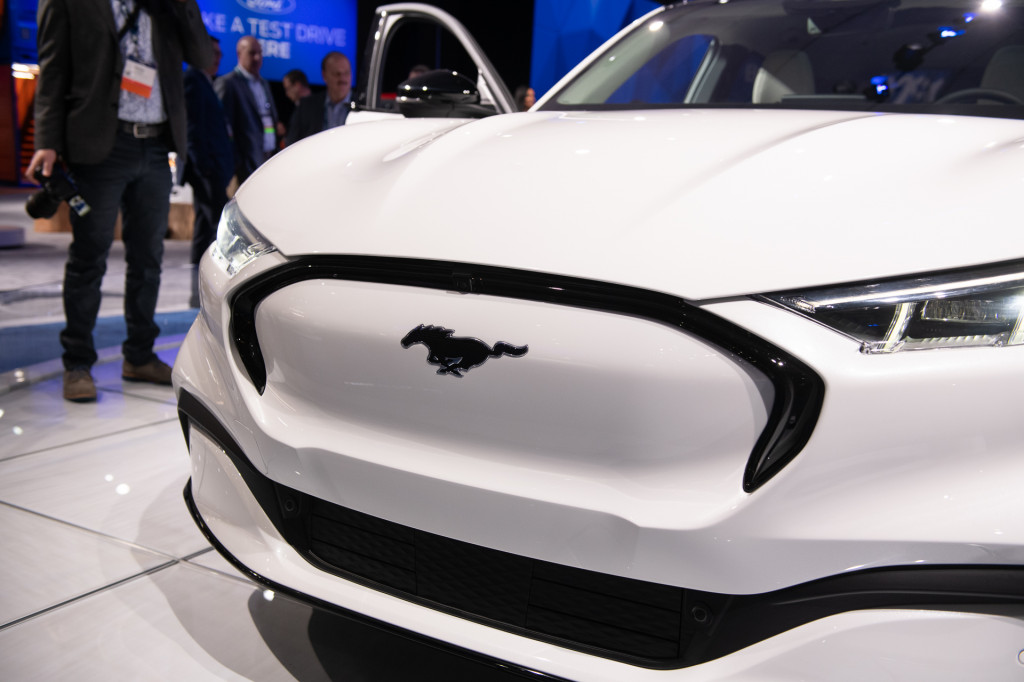 Cold-weather strategies are still TBA. Heiser reports that the vehicle shown on the stand is technically an engineering prototype, and Ford is in its second round of cold-weather testing. Earlier mules fine-tuned traction and stability systems, battery cooling, and other needs, but they’ve yet to decide how to handle battery preconditioning and related details. “We have a really thorough testing plan at Ford Motor Company,” said Heiser. “And so the reality of ambient testing, whether it’s cold or not, it really isn’t any different than we would put our Mustang Coupe through, or an F-150.”

Range figures are subject to change. When we asked why Ford’s estimated EPA-cycle driving range falls significantly for AWD versions, versus the rear-wheel-drive (extended-range) version (270 miles, versus 300 miles, for instance), Ford considered and decided against an umbrella strategy where the lineup would be given only two range ratings (depending on battery size), regardless of rear- or all-wheel drive. Heiser emphasized that the figures are projected and “before complete sign-off on the car.” 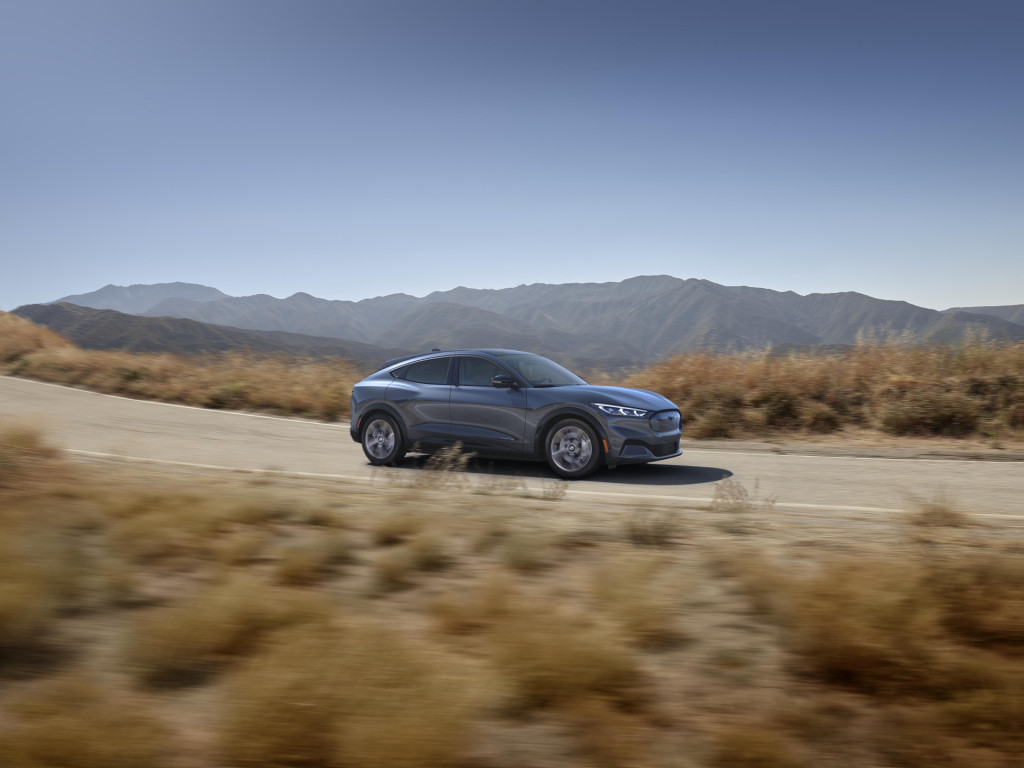 Details set from the start. The project decided on permanent magnet motors and a 400-volt architecture from the start, according to Heiser. Ford developed its own power systems, including its own inverters. The motors were outsourced, but Ford had a lot of input. Regarding going 800-volt, Heiser said: “There’s a lot of cost that goes into that, and for our price point we didn’t consider it.”

Never on the compliance-car track. When we asked Heiser if Mustang Mach-E or the version that preceded it was ever seen as a replacement for the Focus Electric—a compliance-car conversion of the Focus built for many years in intentionally very limited numbers—he said that it was always going to be a utility vehicle, its own nameplate, and much larger in scope. 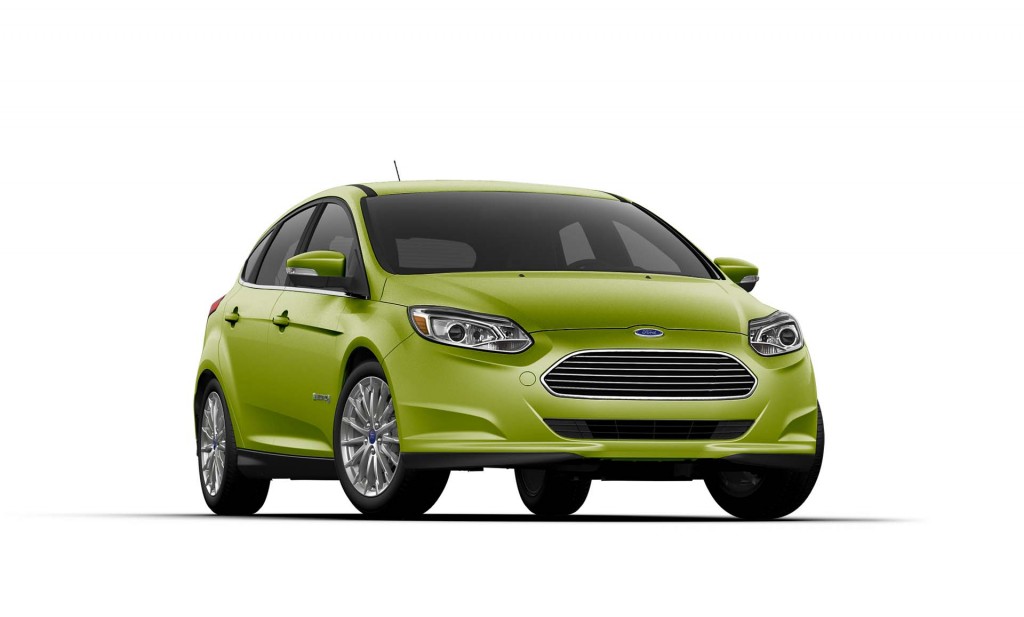 Joe Hinrichs, Ford’s president of automotive, helped brush the compliance-car speculation aside by noting at the LA auto show that there would be about 50,000 Mach-E models produced in the first year. And as Ted Cannis, Ford’s global director of electrification, told us in October, “Winning will not be driven by compliance cars.” 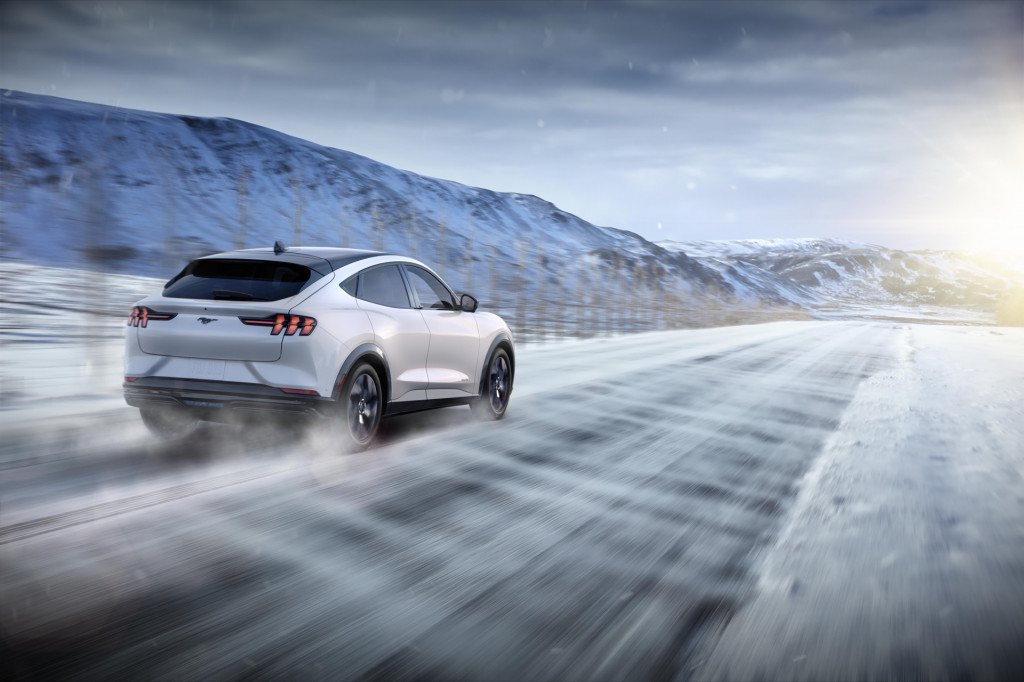 Just before we concluded with Heiser, he let on to two resume items that perfectly frame why he was charged with this project. Prior to Mach-E, Heiser ran Ford’s teardown facility and benchmarking—where he tore down Tesla Model S and Model X vehicles—and oversaw the automaker’s material cost reduction efforts. And just before that, he was chief engineer for the much-loved Ford Flex.

If Heiser can incorporate some of the efficiency smarts gleaned from Tesla, the critical acclaim of the Flex, and the soul of the Mustang into the Mach-E, the electric SUV could well be the turning point for a mass-market brand to find some momentum with EVs. Now it’s up to Team Edison to pull out some different ways and means to sell and support the Mach-E to convince America that it needs and wants this one.

Looking to buy? Northeast International Auto Show is the place to go – The Providence Journal

Technology could cut train crews from 2 to 1 but is it safe?

A band of brothers running Sovel’s Auto Service in Novi

Car sales may be slumping, but policy could give electric vehicles and the auto industry a charge

2020s will not be kind to active fund managers

How to understand clients by analysing social media

6 trends that will drive artificial intelligence deployments in 2019

Pearson’s digital failings must be consigned to the history books