Ford to boost F-150 Lightning production capacity to 80,000 per year


Sept 16 (Reuters) – Ford Motor Co (F.N) said on Thursday it would boost its F-150 Lightning production capacity to 80,000 per year due to strong demand for the electric pickup truck, adding that the vehicle would go on sale next spring.

The U.S. automaker, at an event attended by Michigan’s Democratic Governor Gretchen Whitmer, said it would invest $250 million and add 450 hourly jobs across three of the state’s facilities to lift the vehicle’s production.

Ford’s move, confirming a Reuters report last month, comes even as Industry observers question whether individual buyers will give up their gas-powered pickups for electric models.

The Lightning, which has over 150,000 reservations to date, is an electric version of Ford’s best-selling gas-powered F-150 truck, whose popularity has made it the subject of some songs.

“The interest from the public has surpassed our highest expectations,” Executive Chairman Bill Ford said in a statement.

Reuters had reported the automaker was targeting annual production of more than 80,000 Lightning pickup trucks in 2024, up from its prior target of more than 40,000. read more

Ford and other global automakers are racing to shift their gasoline-powered lineups to all-electric power under pressure from regions like Europe and China to cut vehicle emissions.

Ford’s plan to lift capacity also comes as Congress is debating whether to expand tax credits for electric vehicles, including offering an extra $4,500 to EVs such as the Lightning that are made in the United States with union labor.

The Rouge Electric Vehicle Center, which is assembling the electric pickups, is a test bed for new manufacturing technology, said Christopher Skaggs, the manager overseeing Ford’s EV planning and implementation.

Instead of a fixed assembly line, Lightning bodies and frames ride on automated platforms, enabling Ford to add or subtract platforms to change production rates.

Robots flip truck frames upside down to allow for attachment of suspension parts. Tools are attached to data systems that track whether bolts are attached properly.

Production of prototype Lightning trucks currently occupy a portion of the 500,000 square foot electric vehicle assembly area. Ford has space to expand if demand allows, though plant manager Corey Williams and other Ford officials would not talk about plans beyond those announced on Thursday.

Michigan U.S. Representative Debbie Dingell, whose district will get many of the new jobs, was also present at the Dearborn factory event.

Shares of Ford were up 1% in afternoon trade.

Reporting by Abhijith Ganapavaram in Bengaluru and Joseph White in Detroit; Editing by Maju Samuel 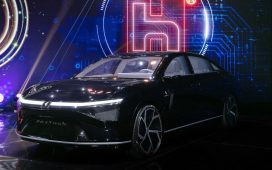 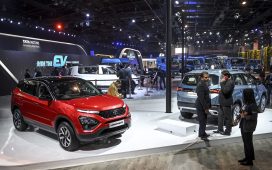