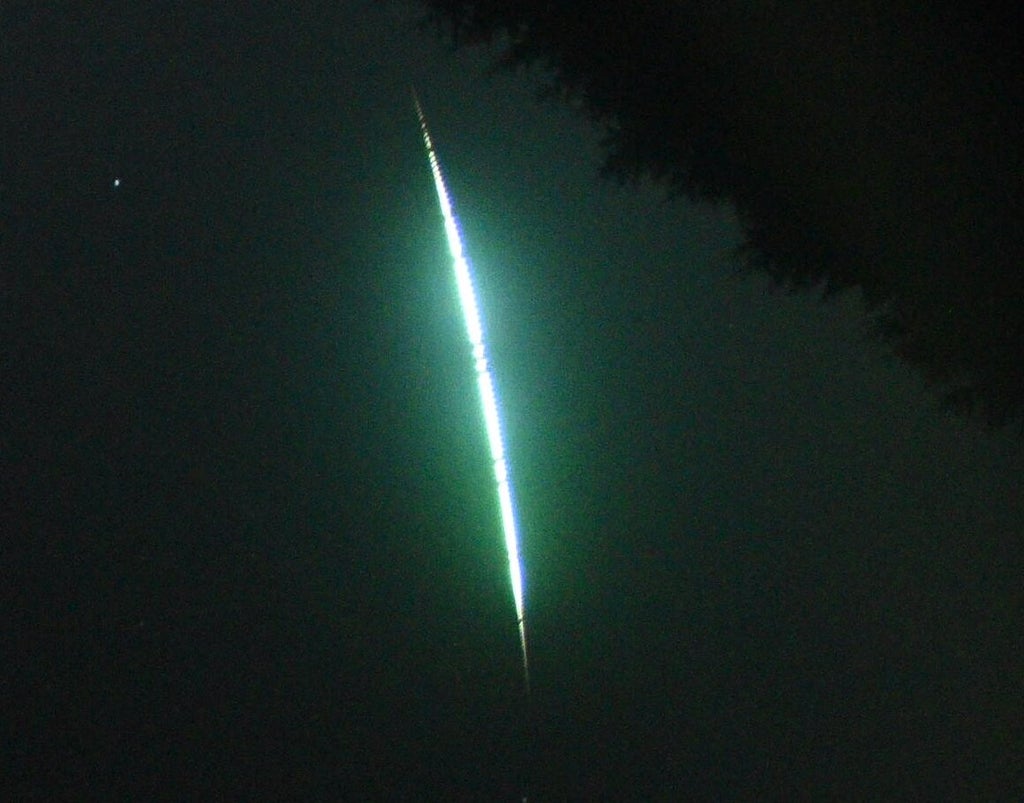 A meteor fireball that lit up UK skies last week may have dropped a meteorite in south Wales, scientists say.

Experts from the UK Fireball Alliance (UKFAll) believe the metorite fell somewhere near Bridgend, a town halfway between Cardiff and Swansea.

The fireball was spotted at 12.40am on Thursday 12 May and sightings of the spectacle were reported widely on social media.

The scientists said about 20kg of rock from an asteroid entered the atmosphere at nearly 30 km/s.

“Most of that rock vaporised in the atmosphere within seconds, but we calculate that maybe 100 grams survived and landed in an area north of Bridgend,” Dr Jana Horák from the National Museum Cardiff and a member of UKFAll said.

In a bid to boost the hunt for the fragment, she is now asking people in the area if they found anything or unusual in the Bridgend area over the weekend.

“Looking for rocks smaller than an apple in Bridgend and the surrounding hills and woods is like looking for a needle in a haystack,” Dr Horák said.

“It’s probably a glossy black or brown colour, maybe with the dark fusion crust broken off in places, but it won’t appear spongy or bubbly.”

UKFAll has warned anyone who thinks they may have found a meteorite to not handle the object with their bare hands or touch it with a magnet, as this can jeopardise scientific analysis of the rock.

Dr Ashley King of the Planetary Materials Group said: “The meteorite won’t be hot and is as safe to handle as any other rock but, if possible, please don’t pick it up with your bare hands as that will contaminate the stone.

“Also don’t test it with a magnet, as this could destroy valuable information. It may be in a place where rocks aren’t usually found, like on a lawn or footpath.

“Don’t take any risks looking for it, and don’t go into areas where you shouldn’t. But if you have found something out-of-place within the calculated fall area, we’ll certainly be interested to check it out.”

It comes a matter of weeks after UKFAll were searching for asteroid fragments in Shropshire, and just over a year after a meteorite was discovered in the town of Winchcombe in the Cotswolds after landing on a family’s driveway.

UKFAll has asked anyone who thinks they have discovered a piece of last week’s fall to send them a photo and coordinates of the location.