Over the past few weeks, I’ve spent a lot of time looking at enterprise notebook computers from the perspective of an IT department that’s looking for both mainstream laptops as well as executive machines. I’ve looked at a variety of machines and found today’s offerings have a lot in common but differences that could prove important, specifically in design and their capabilities for video conferencing.

A few things to start with: An enterprise IT shop in North America really only has three basic choices in vendors: Dell, HP, and Lenovo—the three largest PC makers, and the only ones that offer designs specifically tailored for the enterprise market, along with the level of support and maintenance that IT departments want (such as longer warranties and parts stocking). You might see IT departments choose Microsoft Surface machines, such as the Surface Book and the Surface Pro 7 with a detachable keyboard, but only if they use Microsoft’s own management tools. And I know quite a few that use Apple Macs for design-centric users, most often with their own management, which typically gives IT a bit less control. Acer makes some interesting business laptops (such as the Swift series), but doesn’t offer enterprise level support in the US.

The three big vendors all offer a range of machines in various sizes, including both Windows laptops (which I’ll focus on here) and Chromebooks. All three are focused on Intel-based designs, and offer a variety of models with chipsets that support Intel vPro technology, which allows better security and management features, including remote configuration, something you typically do not see in laptops aimed at small businesses or consumers. Today, this typically means 14nm Intel 10th Generation Cores in the “Comet Lake” family and in some cases, older 8th Generation “Whiskey Lake” processors, as the 10th Generation 10nm Ice Lake processors do not support vPro. I expect all the vendors will shortly offer newer versions with the new 11th Generation Intel Core (10nm, “Tiger Lake”) with vPro support, but neither the chips nor the machines have been formally introduced yet.

Both Lenovo and HP have recently introduced a few models with AMD Ryzen Pro processors, which offer the same kind of features (which work with the Microsoft management tools, but so far have less support for third-party tools.) Many IT shops require vPro compatibility, though as AMD gains more support for its Ryzen Pro, that may change.

Here are some thoughts on the basic lines.

Dell’s enterprise laptops are in the Latitude series, and within that, Dell offers three lines—the 5000, 7000, and 9000 series. All of these are Intel based, with vPro options.

Of these, the 9000 series is the “ultra-premium” line, designed for smaller deployments or executives. These machines have the highest-end features. The top of the line is the Latitude 9510, a 15-inch thin notebook, with one of the largest and longest-lasting batteries I’ve tested. It is available as either a standard notebook or a 2-in-1 with a touch screen. This line features thinner bezels, a redesigned keyboard and mouse pad that are among the best I have used, noise-cancelling microphones for better video conferencing, and a proximity sensor. That’s for the presence detection feature that can automatically lock the machine when you leave and unlock when you get close, all using Windows Hello for logging on. In addition, it is the only one in the Latitude family that now has a 5G option. These have a darker aluminum chassis and seem quite sturdy.

The 7000 series is the primary premium line, but designed for larger deployments with more options for configurability, such as both carbon fiber and aluminum chassis, and a much wider array of screens including privacy options. This series looks like the 9000, but without some of the higher-end features of the 9000, such as presence detection. Dell Latitudes include software called Dell Optimizer, which is supposed to improve performance, but in my testing, they slightly lagged their competitors. The 14-inch Latitude 7410 I tested had a relatively weak webcam, but I really liked the redesigned keyboard. It was a terrific laptop with a great display with small bezels.

Dell also offers a more affordable 5000 series, aimed at a more mainstream market, with a wider array of screens and processors (including 45-watt H-series processors in addition to the 15-watt U-series processors in the higher-end series). The design here looks a bit older, but these are solid enterprise machines.

Dell also offers the Precision workstation line, which includes vPro support, as well as the small-business focused Vostro line, and the XPS and Inspiron lines aimed at consumers.

The 1000 line is the high-end, designed as the premium thin and light notebook, and today only available in convertible (x360) form factors. The 14-inch EliteBook x360 1040 G7 I tested was a nice entry. It’s just slightly smaller than the other 14-inch 2-in-1s I’ve tried and was actually the fastest in the group on most of my benchmarks, though not by a large amount. I like the fact that it just uses the Windows power control to set best performance, rather than some other utility. It has a particular well-implemented presence detection system (similar to the Dell one) and a noise-cancelling microphone system, with perhaps the best webcam I’ve seen in this group of laptops, so it’s a good choice for people who are doing a lot of video conferencing. On the other hand, while the aluminum design looks good, to me, it doesn’t scream “premium” as much as those on the high-end Dell and Lenovo lines. Also, I didn’t find the screens I tested to be as bright, but if you want privacy, HP does offer the best built-in privacy screens I’ve yet tested.

The lower-end 800 line is more mainstream with a bit older design, a few more ports, slightly larger bezels, and a weak webcam, without some of the high-end features. It was still a fine- performing laptop. The version I tested, the EliteBook 845, had a Ryzen Pro processor that tested quite well, and HP offers Intel versions as well. These are available as standard notebooks, but with a few 2-in-1 models as well.

HP also has a somewhat lower-end ProBook series, including both a 600 series (which has standard Intel, Intel vPro and Ryzen offerings) and a 400 series. These aren’t explicitly oriented towards the SMB market, but that seems like the best fit. HP also has a workstation family called Zbook, and the Pavilion line of consumer notebooks.

In addition, HP has one unique machine aimed at executives, a very thin 2-in-1 notebook called the Elite Dragonfly. This has a 13.3-inch display and is notably smaller and lighter than the others (in part due to the smaller screen). This seemed to be a very well-made machine, in a striking blue magnesium color. It had an excellent webcam and speakers, although the performance lagged the 1040 by a bit. (I doubt most executives could tell the difference). This is unlikely to be the machine an IT department would pick for a broad rollout, but it could supplement the more mainstream models for their executive users.

With their matte black chassis and red highlights, Lenovo’s ThinkPad series is perhaps the most distinctive of the enterprise laptops. Lenovo actually offers a variety of series of machines under the ThinkPad brand (as opposed to the more consumer-oriented IdeaPad line).

The X1 series is the ultra-premium enterprise line, including the X1 Carbon laptop, X1 Yoga 2-in-1s, and the larger X1 Extreme, as well as some “statement” laptops like the X1 Fold. I’ve looked at a number of these recently, including the 8th Generation X1 Carbon, and although the bezels are a bit larger than some of the competition, it’s still a terrific 14-inch executive notebook. The design is getting a bit dated though; I’d like to see a larger touchpad. The carbon fiber and magnesium chassis has the classic black matte finish, but it shows wear a bit too easily. It is thin and light, with a very nice keyboard and strong performance.

I didn’t look at this year’s version of the convertible Yoga, but it doesn’t look too different from last year’s X1 Yoga. That model had an aluminum chassis which was more durable, if not as iconic. The webcam and speakers are fine, although not special, and I’ve generally been impressed by the variety of screen offerings. There’s also a higher-end offering, the X1 Extreme, which has a 15.6-inch display and a higher-powered processor, though it’s obviously bigger and heavier.

The other lines are a bit more mainstream. The T-series consists of straightforward 14- and 15-inch notebooks, with no 2-in-1 options. The X-series are 13-inch notebooks aimed at executives, but not as high-end as the X1 family; these are available as both standard laptops and Yoga models. The ThinkPad P-series are mobile workstations with high-powered Core and Xeon offerings. All of these are available with Intel processors with vPro, and there are AMD options in the T, X, and P family as well.

The E-series seems more aimed at small-businesses, with both Intel and AMD options; and the L-series are entry-level laptops. These don’t offer vPro, and don’t seem particularly aimed at enterprise customers.

All of these machines offer the distinctive TrackPoint pointing stick along with physical buttons for clicking, in addition to the now-standard touchpads. Having used the TrackPoint for many years, I’m quite used to it, but still believe it’s time for ThinkPads to offer larger touchpads. (By the way, the HP EliteBook 845 I tested also had a pointing stick, although I still think ThinkPads have a bit of an edge in that department.)

I have heard some pushback from some enterprises against buying from a Chinese firm, but all of the laptops I’ve used lately—Lenovo, Dell, HP, Microsoft, Apple, etc.—are made in China.

I haven’t discussed pricing much here, because all three of the main vendors offer a lot of machines at different price points, with list prices of low-end models starting at under $700 and high-end executive models than can cost $2,000 or more. In all cases, enterprises should almost never pay list price. All of these vendors regularly offer discounts on their web sites, and besides, enterprises tend to buy in bulk and get pricing to match their specific requirements.

Again, all three of the big vendors offer a wide range of machines at different price points. You’ll want to figure out how many of each kind of notebook you need, focusing on screen size (13-, 14-, or 15-inch), processing requirements, memory, and storage, and then likely want to get bids from all three major players. 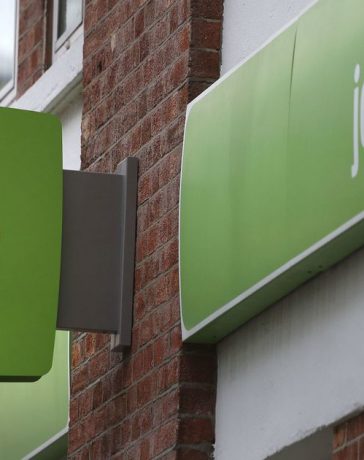