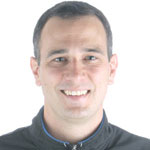 For years the golf industry has tried to lure younger players to a sport whose participants are increasingly older.


A few Central Oregon courses have offered the GolfBoard, a four-wheeled, scooterlike electric board on which golfers can ride during a round.

The latest version of time-saving, fun-enhancing golf transportation is the Finn Cycle, an electric bike that gets golfers around the course rather quickly while providing a bit of an adrenaline boost.

Meadow Lakes Golf Course in Prineville is currently one of just two courses in Oregon to offer the Finn Cycle. The course acquired its four bikes only about a week ago and rents them for $21 per 18-hole round or $13 for nine holes.

“It’s nice because you can separate from the people you’re playing with,” says Meadow Lakes assistant pro Jared Lambert about the Finn Cycle. “You play a little bit faster because you go to your own ball. You don’t have to have two people in the cart and drive back and forth across the fairway.”

Lambert says the course has rented only about one or two per day since getting the bikes. He figures some golfers have safety concerns that he believes are unfounded.

“We don’t think that anybody can do anything on these that they couldn’t already do with a golf cart,” Lambert says. “It’s basically the same speed. And you actually have quite a bit more control over this thing than you do a golf cart. You can get your foot stuck in a golf cart pedal and if you don’t know what you’re doing you can’t stop. These things (the cycles) turn a little bit fast and are a little bit more intuitive to respond to something.”

The Finn Cycle has two small motorcycle tires, as well as front and rear suspension and disc brakes comparable to a mountain bike. The golfer presses the throttle with his or her right thumb and employs hand brakes like those on a bicycle.

The golf bag sits along the center line of the Finn Cycle and the rider basically straddles the bag. The electric motor is in the rear wheel and the lithium battery can go 36 holes on a single charge, according to Lambert.

The Finn Cycle travels at the same speed as a conventional golf cart, about 15 mph, and can substantially speed up the pace of play with each player driving directly to his or her own ball, according to www.finnscooters.com.

Rick Reimers, the CEO of Missoula, Montana-based Sun Mountain Motor Sports, is the inventor of the Finn Cycle. The company claims it is dedicated to solving slow play in golf. According to Reimer, the average golfer can play a hole in an average of 71⁄2 minutes on the Finn Cycle, as opposed to 15 minutes per hole with a two-person cart. That makes for an 18-hole round of two hours, 15 minutes, compared with 41⁄2 hours in a cart.

“It is time to rethink golf,” Reimers is quoted on finnscooters.com. “The game is at a tipping point: the young people we need in the game don’t have 41⁄2 hours to spend on the course. Pairing Finn with golfers with a desire to play ready golf can cut playing time in half.”

Lambert and Meadow Lakes head pro Zach Lampert discovered the Finn Scooter at a PGA Merchandise show in Seattle in October 2018. They immediately saw the appeal.

“We’ve got to start bringing younger people into the game,” Lambert says. “Hopefully this is something that we can offer to separate ourselves a little bit.”

Currently, Creekside Golf Club in Salem is the only other course in Oregon that offers the Finn Cycles, according to Lambert.

“They’re pretty new, so I’m sure other courses will be getting them as well,” Lambert says. “A lot of other courses have the GolfBoards. People are looking at alternatives, and seeing the success of the GolfBoard and trying to come up with other ways to bring in that extra income and bring people into the game that might not have been drawn to it before.”

Meadow Lakes applies the same rules for the cycles as it does for carts — stay 30 feet away from the greens and off the tee boxes. But cruising along the fairways is no problem.

“We’re not limiting it to the cart path or anything,” Lambert says. “That would take away the fun.”

Businesses in Greenville use technology to reduce contact – WSPA 7News

Report: BMW has a 1,006-horsepower, all-electric M5 in the works

BPD looking to identify a suspect related to an auto theft

Is Nissan About to Reveal the Electric Car Everyone Really Wants? • Gear Patrol

How artificial intelligence will change the future of work

How to bypass Zoom 403 forbidden error