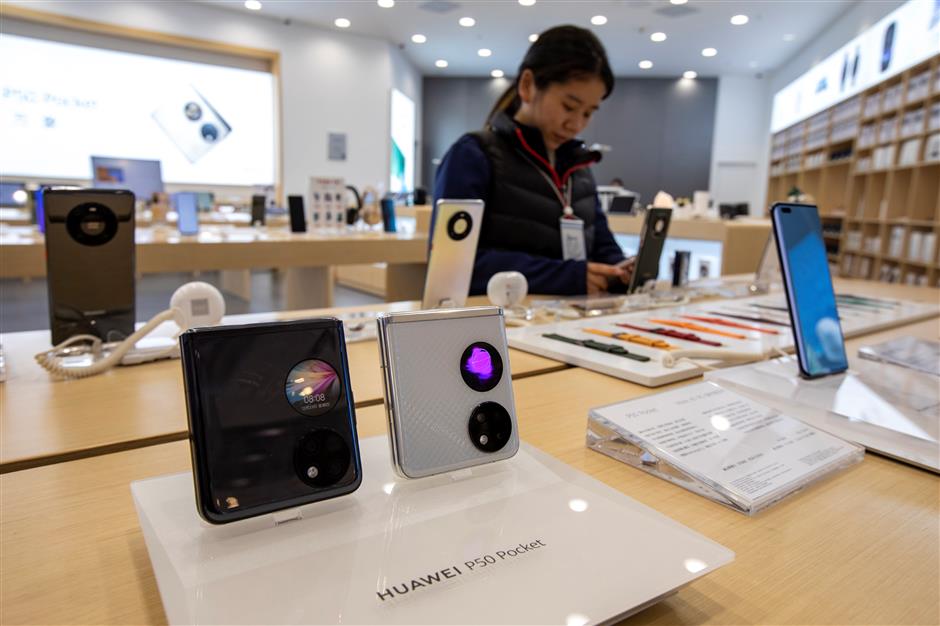 Huawei’s new foldable P50 Pocket smartphones are displayed at a store in Shanghai.

Chinese smartphone brands are starting to fight back after Apple’s iPhone unexpectedly took the lead in the domestic market.

The industry was shocked by Apple’s surge, even with the decline of Huawei, crippled by strict US sanctions. Apple was normally the No. 4 or No. 5 player in China in recent years.

Now they are vowing to grab the high-end market share that Huawei lost and Apple owns.

Chinese brands targeting the market include well-established Xiaomi, Vivo and OPPO and fast-growing ones such as Honor, Realme and OnePlus.

“The foldable model may be a chance. We can do better than Apple in this new category,” said Zhao Ming, chief executive of Honor.

Honor, spun-off from Huawei in 2020, launched the company’s first foldable model, the Magic V, this month. Zhao dropped the new model twice during a press conference to show the durability of foldable technologies and dispel concerns about fragility.

It reminded people of similar tests done by former market king Nokia and reinforced Honor’s confidence in the product.

Honor released its Magic V foldable screen smartphone this month and sees a chance to do better than Apple’s iPhones.

Among major smartphone vendors, only Samsung, Huawei, OPPO and now Honor have launched foldable models. Rumors suggest that an Apple foldable iPhone is in the works.

But Apple’s iPhone 13 model is already adding enough pressure to its competitors in China.

Apple surpassed Vivo in October to become the largest smartphone brand in China “for the first time since December 2015,” as other brands lost ground in their October sales, according to a Counterpoint Research report.

In October, overseas brands, including Apple and Samsung, took about one-third of market share in China, according to China Academy of Information and Communications Technology, a researcher authorized by the Ministry of Industry and Information Technology. 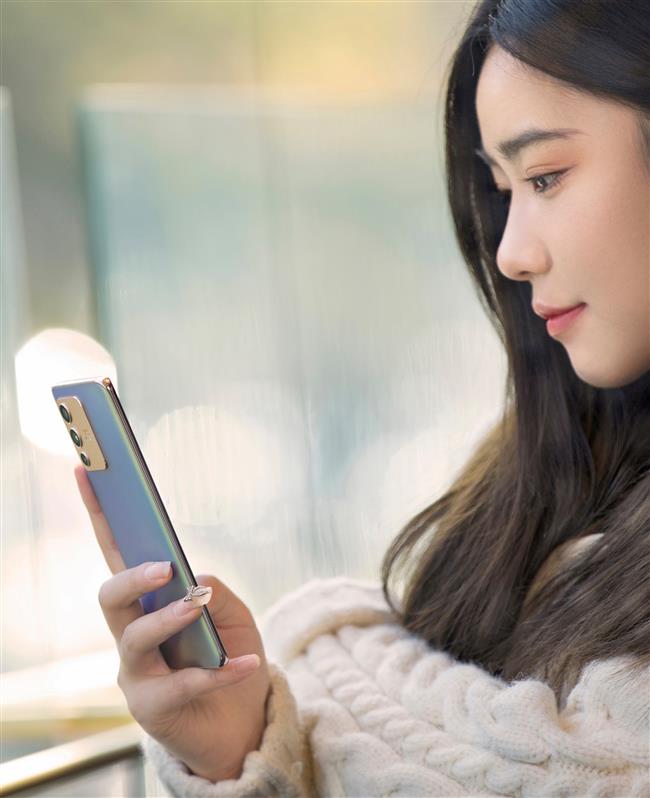 Huawei held a 40 percent market share in China until it was hit by tech sanctions and supply chain challenges and cannot recover in the short term.

“Chinese smartphone users are maturing fast and are looking to buy more high-end devices, which can be a good opportunity for brands. The supply chain is also prioritizing higher-end and higher-margin devices amid shortages,” CounterPoint’s senior analyst Varun Mishra said.

Since December, brands are speeding up flagship model debuts, covering foldable models and features that Chinese consumers like, such as eSports, selfies and fast-charging.

Vivo launched its S12 models with a 108-mega-pixel camera, front fill light and beauty optimization software for ladies and selfie fans. Tencent, the No. 1 dot-com firm in China, is reported to be acquiring a gaming smartphone brand.

Realme and OnePlus, which once focused on overseas markets, have returned to the domestic realm. Realme plans to devote “70 percent research resources” to the development of high-end models to start a new journey in the domestic market, its founder and CEO Li Huaizhong said when releasing the new flagship model Realme GT2 Pro. 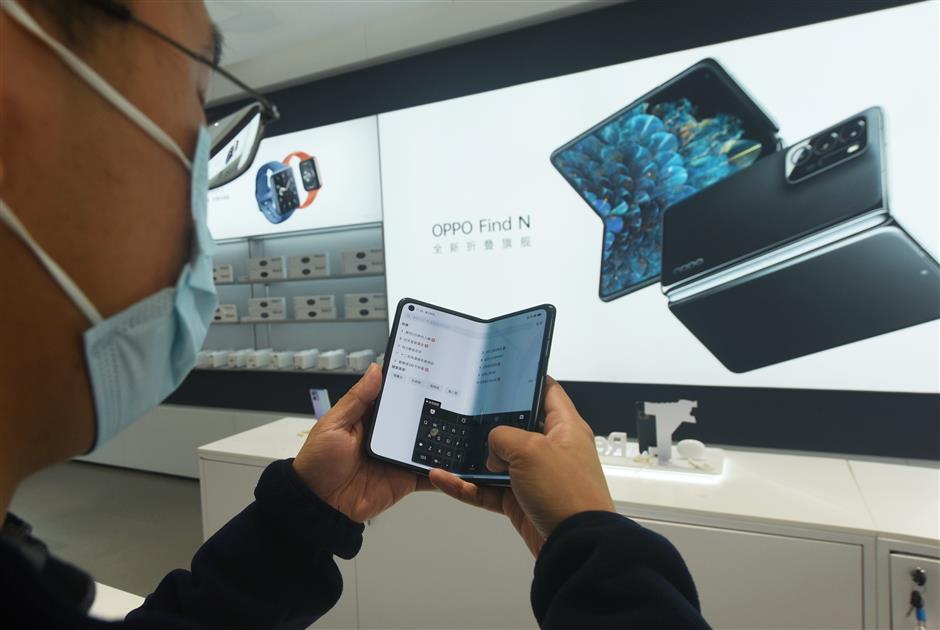 Foldable models are designed not only for tech display, but also really meet user demand for display, durability and daily use, Honor’s Zhao added.

From initial market cultivation by brands like Huawei and Samsung, foldable smartphones will gradually move into the mainstream.

In China, sales will grow 90 percent annually on average to hit 65 million units by 2025, said researchers such as CITIC Securities and Essence Securities.

Also in December, Huawei released its new foldable P50 Pocket while OPPO launched first foldable model, the Find N, at a starting price of only 7,699 yuan.

With technological development and prices falling from the 15,000 to 20,000 yuan of previous models, foldable will become trendy in China.

The foldable phones attracted most people at Huawei’s flagship store on Nanjing Road, and was compared with other shiny products like cars and AR glasses, Shanghai Daily learned on a weekend this month. 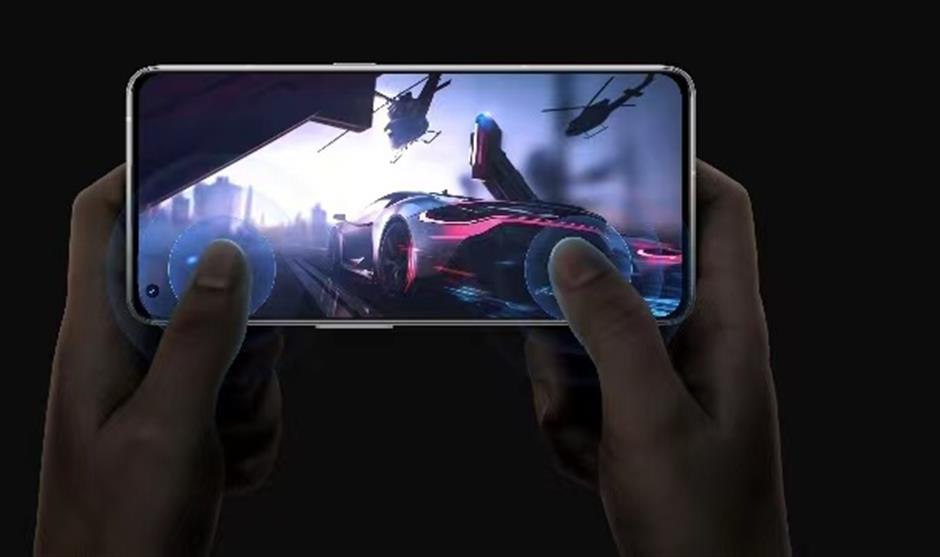 Realme’s first high-end model is inspired by paper and optimized for gaming.

Startup brands Realme and OnePlus had strong sales results in overseas markets, including Asia and North America, but they are returning to the domestic market and are also targeting the high-end segment.

Global expansion has given Realme the confidence to compete with “any overseas giants.” In 2022, China and Europe have become dual “growth engines” for the company to achieve its 50 percent annual growth target.

It’s a high ambition compared with the smartphone industry’s single-digit growth but it plans to devote 70 percent of its research resources to high-end model development, said Realme’s Li.

Founded four years ago, Realme’s sales passed 100 million units globally, with top five market positions in 21 regional markets. In 2021, its sales reached 60 million units, making it the world’s fastest growing brands, reaching No. 6 compared with a No. 47 ranking in 2018.

It released the Realme GT 2 Pro recently as the company’s “first high-end model.” It featured a 2K display screen and super thin design linked to paper and carbon neutrality setups authorized by a research center at Tsinghua University.

In 2021, OnePlus sales surpassed 10 million units globally for the first time, despite pandemic challenges. OnePlus now has 14 million users in 50 countries and regions.

Its models are welcomed in the high-end market in the United States and have ranked No. 1 in India’s high-end markets for four consecutive years, according to Peter Liu, OnePlus CEO.

The OnePlus 10 Pro, priced from 4,699 yuan, features an imaging system co-developed with Hasselblad and a HyperBoost game optimization system.

With an “All in Flagship” strategy, OnePlus plans to expand in its China homeland market this year. As a sub-brand of OPPO, more than 1,000 OPPO outlets can offer maintenance and after-sales service for OnePlus in China.

Also, the OnePlus 10 Pro has been chosen as an official model for eSports events, including League of Legends (LoL) competitions in 2022.

Among all Android models, users are only willing to pay the additional costs for some OnePlus models and Huawei’s Porsche Design products.

This popularity has led to sellouts among such high-end Chinese brands.

A similar situation occurred on the debut of the iPhone 13 in China with users prepared to pay more to get early access to the new model.