The former owner of the Brockton Furniture Building is now being given four months to vacate the property after the Brockton Redevelopment Authority took it by eminent domain on Thursday. City officials said the redevelopment of 93 Centre St., an eight-story building at the corner of Centre and Montello streets, is the linchpin for the revitalization of the downtown area.

BROCKTON – The tallest building in downtown Brockton has a new owner.

The Brockton Redevelopment Authority, a quasi public agency contracted by the city of Brockton, executed an eminent domain taking on Thursday to gain ownership of the eight-story, 113-year-old Brockton Furniture Building, located at the corner of Centre and Montello streets. The BRA then immediately turned it over to a developer, called 93 Centre LLC, in order to transform the mostly dormant structure into 55 apartments as part of a 40R Smart Growth development project, including 80 percent market rate units and the rest priced as affordable housing, with commercial space on the ground floor.

The mayor of Brockton and others have called the Brockton Furniture Building the most important property in the city’s plans to revitalize the downtown area. So much so that the city used the governmental power of eminent domain to pry the building away from its longtime owner, John Monem, who operates a furniture business on the first floor, while agreeing to provide Monem with $1.02 million.

The mayor of Brockton and several downtown development officials faulted Monem for failing to accomplish any significant work to improve the building over more than 20 years of ownership, with the exception of routine maintenance.

“It’s a linchpin piece to the revitalization to downtown,” said Brockton Mayor Bill Carpenter, speaking about the taking on Friday. “And because it was such a critical property, at this point our hand was forced. … Eminent domain is only used as a last resort. We don’t want to use it. What it’s designed to be is an incentive for the property owner to realize, if they don’t go forward with some type of viable redevelopment plan, this could happen.”

Joseph Zoppo, an attorney representing Monem, said a lawsuit was filed on Sept. 28 in Brockton Superior Court to stop the city from going forward with the project with 93 Centre LLC, which includes Monem’s former development partner, Ted Carman, of Concord Square Development. Monem was originally working with Carman on a historic renovation of the Brockton Furniture Building that was first proposed in May 2016, before their partnership broke down. Monem also said that he has invested hundreds of thousands of dollars in predevelopment costs for the renovation, while also working to secure millions of dollars in tax credits, in a project with a total price tag estimated to be between $15 million and $20 million.

“The lawsuit continues,” said Zoppo, reached on Friday afternoon. “We don’t believe that the city can take the property in the manner that they’ve done it. There have been some (settlement) talks that have happened in the last few months that haven’t borne fruit. We don’t believe that we are the reason for that. But we are certainly not giving up the struggle, in keeping the city from sending this off to a different developer. We don’t think the city is a kingmaker in who decides to develop property in the city of Brockton because they feel someone else would do a better job.”

Such land takings have been challenged in court before. But the Supreme Court narrowly decided in a 2005 case out Connecticut, called Kelo v. City of New London, that private redevelopment is a valid public use in an eminent domain taking. While 44 other states have since passed laws preventing eminent domain takings for private use, Massachusetts is one of the six states without such a law.

The mayor, the BRA and city planning officials told The Enterprise that the property taking is a done deal, and all Monem can do at this point is dispute the compensation.

Carpenter and other city officials said that Monem is actually getting a steal of a deal with the $1.02 million. Carpenter said that figure was reached by an appraisal, required by the state, that considers the building’s potential highest and best use.

BRA Executive Director Robert Jenkins said that highest and best use determined was luxury condos. But he, Carpenter and others said that is unrealistic in the current real estate market in downtown Brockton.

Carpenter said the $1.02 million is a generous, inflated figure. The Brockton mayor noted that Monem bought the building for around $200,000 in 1993.

“Our opinion of the current value is more in the $700,000 range or less,” Carpenter said. “There shouldn’t be this knee-jerk reaction about this poor guy and we’re taking his building. In fact, he’s being paid top, top dollar for the building. I don’t think there’s anyone in the world who would give him a million for the building.”

Carpenter said the city is also providing Monem with relocation services to relocate his furniture business, which is required because the building is within the city’s Urban Revitalization District.

Asked if any other properties could be targeted for eminent domain, Carpenter, Jenkins and Brockton City Planner Rob May said several properties and vacant lots on Montello Street could also be acquired for urban revitalization, such as 95 Montello St., which is the 28 Corner Convenience store that recently became a fried chicken and burrito shop, across the street from the Brockton Furniture Building.

“This is all about creating this walk-able, connected downtown, where you need to have storefronts and building facades that make a warm an inviting neighborhood,” May said. “People don’t want to walk past large parking lots and vacant storefronts. … It was never our plan that the BRA acquire all these properties, but this is a whole carrot and stick opportunity. If current property owners are unable and unwilling to make something happen, (Jenkins) has the authority to nudge them on a little bit more. The ultimate threat is eminent domain, but our goal is to work with the current property owners.”

May, who was appointed in 2014, said the acquisition of the Brockton Furniture Building is a pivotal point in the effort to revitalize the downtown since an urban development plan began to take shape five years ago. Before that, there was no coherent plan in place for the development of the downtown, May said. Now, there is a litany of redevelopment projects taking place in the downtown, including at 75 Commercial St., 47 Pleasant St., 47 W. Elm St., 121 Main St., and 226 Main St. There’s also a downtown city parking garage project on Petronelli Way that the state contributed $10 million toward.

“We have accomplished so much and have really set the groundwork for long-term growth in downtown,” May said. “We’ve got a lot going on downtown.”

Jenkins said the best case scenario for 93 Centre LLC to begin construction on the Brockton Furniture Building is in August of next year. But 93 Centre LLC has a 24-month window to complete the project, he said.

In any case, it’s a “huge” development for downtown Brockton, Jenkins said.

“It really demonstrates to other outside investors that Brockton is really open for development,” Jenkins said. “This is not the only building we’re focusing on. But it demonstrates to private developers that Brockton is ready and we have a plan. And the second part is the state sees that we are serious. We not only have a plan, we’re implementing it.”

Is Best Buy closing at the Westgate Mall in Brockton? – Enterprise News 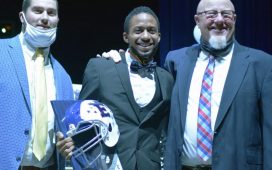 Edwards' smile, attitude will be missed on the sidelines – Dothan Eagle

Methuen shows caring for others its chief attribute – Sentinel and Enterprise

7 reasons why electric scooters are so popular

Is Best Buy closing at the Westgate Mall in Brockton? – Enterprise News

Covid testing for people arriving in England delayed until Monday

Edwards' smile, attitude will be missed on the sidelines – Dothan Eagle