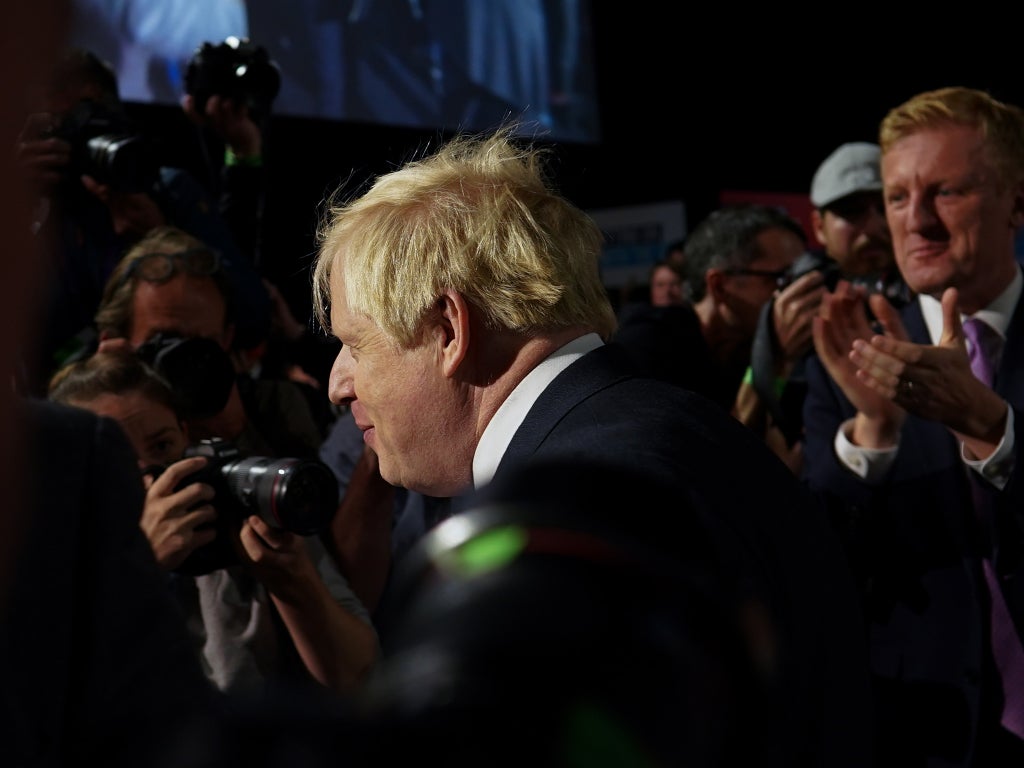 Public opinion of Boris Johnson’s government’s handling of taxes, inflation and the UK economy has nosedived, according to YouGov polling.

As think-tanks and trade organisations condemned the prime minister’s Tory conference speech touting a “high wage economic revival” as “vacuous and economically illiterate”, the pollsters found his party were now neck-and-neck with Labour on the issue of taxation.

Meanwhile, the EU is preparing to table “far-reaching” new proposals on the Northern Ireland Protocol by the “middle of next week”, in a move welcomed by the DUP, which had threatened to collapse power-sharing at Stormont over the contentious part of the Brexit deal affecting trade in Northern Ireland.

The European Commission’s vice-president Maros Sefcovic urged the UK to dial down the “political rhetoric”, after Brexit minister Lord Frost threatened this week that unilaterally suspending parts of the Brexit deal by triggering Article 16 may end up as “the only way” forward.

Just hours after the EU announced it would offer “far-reaching” proposals for how to resolve issues with the Northern Ireland Protocol, the UK government is reported to have reiterated its threat to trigger Article 16.

Fishing industry leaders in France are threatening to take action against the UK in two weeks’ time if they are not granted a sufficient number of post-Brexit fishing licences.

“French fishing must not be taken hostage by the British for political ends,” French sea minister Annick Girardin reportedly said, while the chair of the Hauts-de-France Regional Fisheries Committee threatened that British people “will not have so many nice things to eat” at Christmas if the issues aren’t resolved”.

My colleague Lamiat Sabin has the full story here:

There is “widespread support” for the Northern Ireland Protocol, Sinn Fein’s president has said, dismissing “rumblings within a section of unionism”.

“There is a recognition across the board that the protocol is necessary to protect the all-island economy, necessary to ensure that the foundations of the Good Friday Agreement are kept intact,” Mary-Lou McDonald told reporters in Dublin.

See also  Motorola Edge vs Samsung Galaxy S20 vs iPhone 11: which flagship is best for you?

“[Maros Sefcovic] will also know, of course, that there are rumblings within a section of unionism, only a section of unionism, and of course the antics of the British Government are well recorded in respect of Brexit, the coercing of the North out of the European Union against the democratic wishes of the voters and, of course, the strategy that they adopted in terms of the exit agreement, and so on.

“The reality is that the protocol has to work for all of us on this island.”

Ms McDonald said the “complications” with the protocol have “been acknowledged by everybody” but said “it is essential that everybody, our European partners, but also the British Government, come at this in good faith and with good will”.

Calling on Boris Johnson and his government to act “on the basis of good will and good faith”, she added: “I believe that Europe is coming at this question in a solutions mode and I fully expect that the British Government will respect that and will reciprocate that.

“Of course, you can never guarantee that, but certainly that is what any responsible and honourable government would do.”

The DUP leader has claimed a victory for unionists as he welcomed Maros Sefcovic’s announcement that the EU will table “very far-reaching” proposals aimed at securing a compromise over the Northern Ireland Protocol within the next fortnight.

Sir Jeffrey Donaldson said: “We were told weeks ago that the EU were not in a position where they were ever going to reopen negotiations, so I think we’ve breached the first wall and I think that is the result of unionists standing together and saying, ‘look, we cannot support this protocol, we cannot support an Irish Sea border’.

Claiming “the pressure we have brought to bear and the steps that have been taken in the last few weeks have focused minds both in London and in Brussels”, he added: “We still have a long way to go, I don’t pretend otherwise, but I think at least now we’ve broken through. We’ve opened up the protocol and there is a beginning of a negotiation. We’ll see what emerges from that.”

Sir Jeffrey had threatened to pull his ministers out of Stormont – a move that would collapse powersharing in Northern Ireland – if major changes to the protocol are not secured, and said he had been assured by Boris Johnson that unless the EU steps “up to the mark”, the UK will move unilaterally to “restore Northern Ireland’s position within the UK internal market”.

See also  Galatasaray vs Besiktas live stream: how to watch the Turkish Super Lig 2019-20 from anywhere

Speaking to BBC Radio Ulster on Thursday, he struck a dour tone over the EU’s newly-awaited proposals, and said he hoped the ensuing negotiations would be “meaningful”.

“The EU will bring forward their proposals, I’ve no doubt that those proposals will fall short of what the UK need and certainly what we need, and there will then follow a period of what Lord Frost called ‘intensive negotiations’,” the DUP leader said, but added: “I’ve certainly seen a change in the tone and language being used by the EU, which is welcome.”

Public opinion of the government’s handling of the economy, tax and inflation have nosedived over the past month, according to YouGov polling.

The pollsters also found that Labour and the Tories are both tied with 25 per cent over which party the public thinks would be best on taxation.

Nadine Dorries has been accused of being detached from “the real world” after she claimed the Universal Credit cut will not push anyone into poverty, my colleague Adam Forrest reports.

The 20-a-week cut to millions of families’ incomes risks 500,000 people in the UK falling into poverty, the Joseph Rowntree Foundation (JRF) has estimated, while the right-wing Legatum Institute has put the figure at just over 800,000.

But asked by journalist Owen Jones at the Tory conference how many face poverty as a result of the cut, Ms Dorries said: “Nobody. Nobody is … No, no, no, because no, Owen – of course not.”

The update comes just weeks after Britain helped thousands to flee Kabul after it fell to the Taliban.

Campaigners said it was “perverse and immoral” that in order to seek protection Afghan refugees had to show “specific reasons over and above simply being a civilian for being affected by the indiscriminate violence”.

May Bulman has this exclusive:

GoFundMe page set up for Tory MP after salary complaints

A GoFundMe page has been set up for a Tory MP who complained his salary was too low.

It has so far received £70 in donations.

The fundraising effort, set up in jest by Simon Harris, hopes to bridge this gap.

“Support this Tory MP struggling on £80k a year,” the page description reads.

“I am raising £20,000 for Sir Peter Bottomley who has courageously admitted that he is ‘struggling’ on the current MP’s salary of £80,000 per year,” it adds.

There will be no return to the “bubble” system in schools, the education minister has said.

Nadhim Zahawi told Sky News: “I don’t want to return to bubbles. Because actually you saw the fall off in attendance which really does harm mental wellbeing, mental health of children.”

His comment comes after roughly 200,000 children missed classes last week due to Covid-19.

It was “insensitive” of a minister to sing (I’ve Had) The Time of My Life as a cut to universal credit came into effect, the mayor of London has said.

Sadiq Khan spoke out after it emerged that work and pensions secretary Therese Coffey sang the ballad early on Wednesday in Manchester.

He said: “All of us are entitled to have a good time and let our hair down.

“There’s nothing wrong with going to karaoke and singing accordingly.

“I think it’s a bit insensitive to sing a song – having the time of your life – on the eve of these cuts. 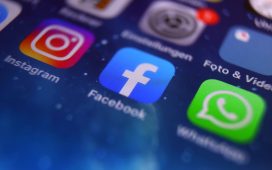 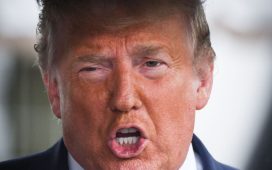 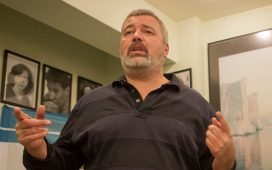 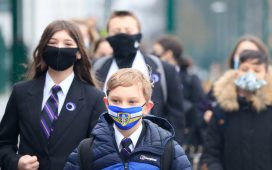 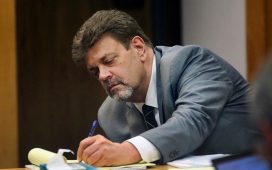 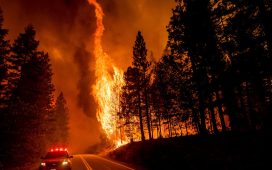