Apple has revealed the new emoji coming to iPhones this month, including a redesigned syringe, a bearded woman and Apple-branded headphones.

There are 217 new emoji, as well as a few updates of existing designs, for iOS 14.5, the new version of Apple’s mobile operating system.

Two hundred of the 217 new emoji in this release will let smartphone users choose from a more ‘inclusive set of couples’.

Popular emoji like ‘couples kissing’ and ‘couples with heart’ are now available with more variations of skin tones and genders.

Apple has removed the blood from the syringe emoji in iOS 14.5, making it more versatile to represent vaccination and take into account the current pandemic. 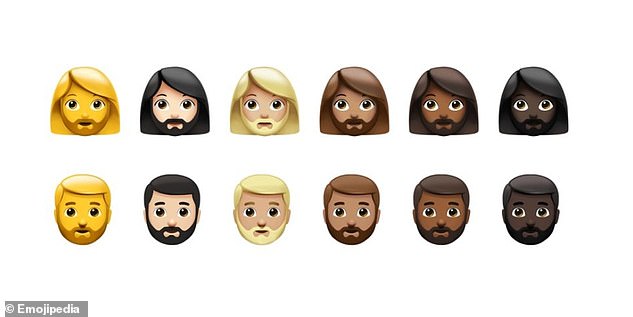 New emoji designs for iOS 14 include ‘man with beard’ (top) and ‘woman with beard’, rather than just ‘person with beard’, in a range of skin colours. The emoji designs were announced last year by Unicode Consortium, the central bank of all approved emoji, but the above are Apple’s own designs. Companies including Apple, Google and Microsoft apply stylised versions of the consortium’s designs to their own operating systems

The working list of emoji are determined by the California-based Unicode Consortium.

Third parties can make applications in support of new emoji.

Candidates must work well at emoji sizes, convey new meaning and must appear to be in demand.

Patterns of existing emoji usage are used to help guide the uptake of new additions to the Unicode Standard.

The ‘version 13.1’ list of new emoji was revealed by Emojipedia, which is part of the Unicode Consortium, the central bank of all approved emoji, last autumn.

Companies including Apple, Google and Microsoft apply stylised versions of the consortium’s designs to their own operating systems – and this is the first look at Apple’s.

The full set of 217 Apple emoji will arrive on iOS 14.5, which is expected later in February, although a public beta version is already available now.

‘Most emojis these days provide an option for a gender inclusive default, or a specific gender can be chosen to show an emoji as a woman or man,’ said Emojipedia in a blog post.

‘Consistent gender options are available for the bearded person in iOS 14.5, with choices for woman or man added in the latest beta.’

Emojipedia lists all 217 new emoji for version 13.1 on its website, complete with how the variations will look on Android, Google’s operating system.

Apple has now given the public the first glance of only around 20 of its own emoji variants, as the US tech giant doesn’t release every single image. 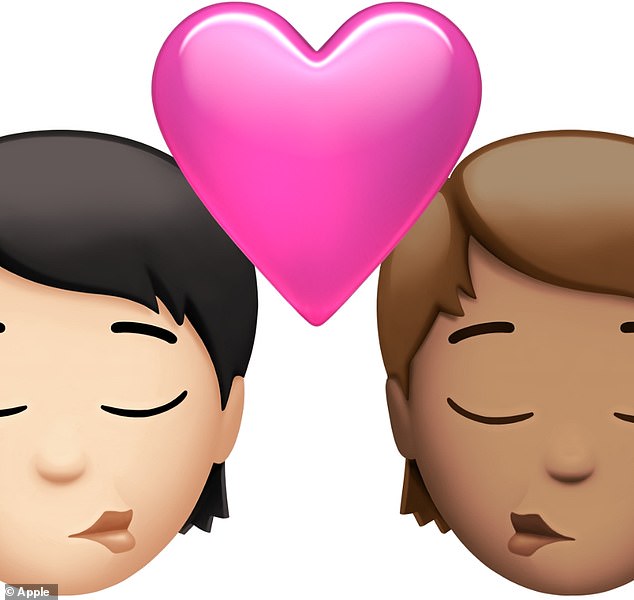 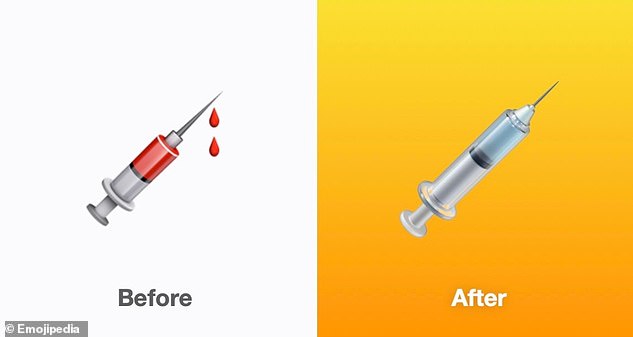 Apple’s redesigned syringe emoji, which makes it more applicable for the current rollout of Covid-19 vaccines 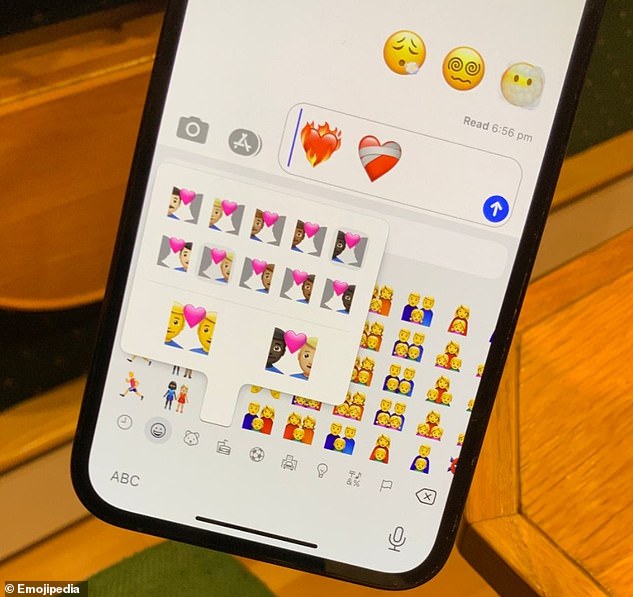 The Apple emoji will arrive on iOS 14.5, which is expected later in February, although a public beta version is already available now

Of the new Apple-specific designs that have been unveiled are several variations of ‘couple kissing’ and ‘couple with heart’, including ‘gender neutral’, ‘man and man’ and woman and woman’.

There are also three new smiley faces in this release – one with spiralling eyes, another shrouded in clouds and another exhaling a puff of air.

The ‘face exhaling’ emoji represents relief, exhaustion, or a sigh of disappointment, according to Emojipedia, though it may also be used to symbolise smoking or even a breath of infected respiratory droplets from someone with Covid-19.

The face in the clouds icon is ‘ambiguous,’ according to Emojipedia, and may represent fogginess, confusion ‘or even a sense of calm bliss’.

Another two additions to the range of heart emojis  are ‘heart on fire’ and ‘mending heart’ – a heart wrapped in a bandage.

From left, coming to iOS 14.5 are ‘exhaling face’, ‘face with spiral eyes’ and ‘face in clouds’ 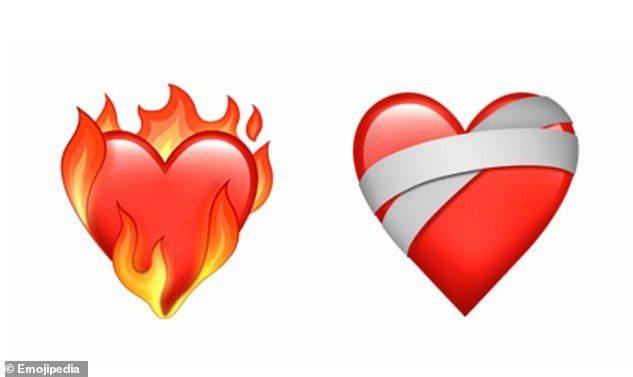 Above, Apple’s designs for ‘heart on fire’ and ‘mending heart’ (which is supposed to be the opposite of a broken heart, according to Emojipedia)

READ  Long Covid: ‘Is this now me forever?’ | Coronavirus

‘Mending heart’ is ‘the opposite of a broken heart’, Emojipedia says, and indicates healing ‘or to express sympathy for someone going through a difficult time’.

Meanwhile, the syringe is one of the already-existing emojis that has specifically been updated by Apple for iOS 14, catering for Covid vaccination-specific conversations.

As Emojipedia explains: ‘Syringe isn’t a new emoji, but it does have one change in the forthcoming update from Apple – the blood is removed.

‘This makes the emoji more versatile when used to describe Covid-19 vaccination.’

Also changed is the headphone emoji, which has been gone from a generic pair of over-ear headphones to Apple’s latest AirPod Max headphones. 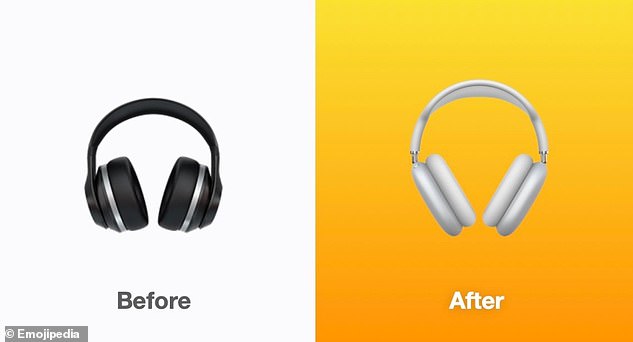 Once displayed as the bud of an iPhone headphone, the headphone emoji emoji has been shown more recently as a generic over-ear headphone. In iOS 14.5, this changes to what appears to be Apple’s latest AirPod Max 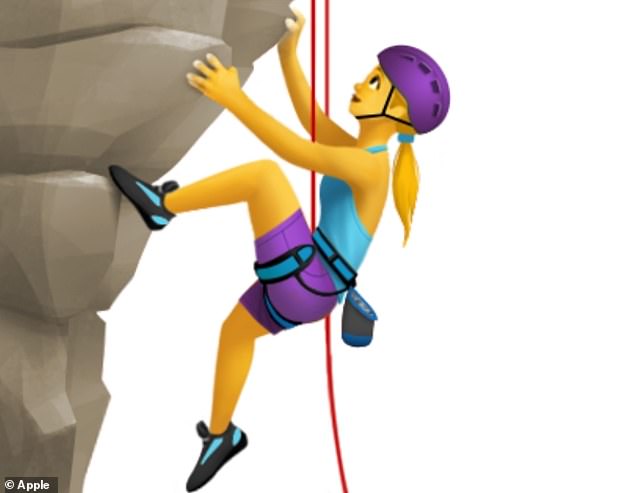 The Unicode Consortium announced 217 new designs for Emoji 13.1, including ‘bearded woman’ and ‘mending heart’, in September.

Improving representation of minority groups, such as transgender women with beards, has been a major concern for Unicode, which began modifying emoji skin tones and adding same-sex couples in 2015, and in 2019 added interracial couples.

A 2019 study in the journal First Monday found that, while Unicode had broadened emoji skin-tone options, it still defaulted in many ways to Caucasian avatars.

Darker skin tones were ‘tacked on’ at the end of the pop-up menu, for examples, with whiteness still centred as the primary choice.

Lead study author Miriam Sweeney, a library sciences professor at the University of Alabama, said black users had also complained that Unicode emojis still all use ‘European phenotypic features, so the same smooth hair and facial structures as before’.

‘It’s a case where the representation did shift and become broader but, at the centre, that base character remains the same,’ Sweeney told WBHM. ‘We didn’t rethink that original image and representation.’

ARE EMOJIS RUINING THE ENGLISH LANGUAGE?

Emojis may be a fun form of communication but they are destroying the English language, a recent study by Google has revealed.

Smiley faces, love hearts, thumbs up and other cartoon icons – rather than words – are the preferred method of communication by teenagers, who are considered the worst offenders regarding the decline in grammar and punctuation.

More than a third of British adults believe emojis are the reason for the deterioration in proper language usage, according to the study commissioned by the Google-owned site YouTube.

Emojis were first used by Japanese mobile phone companies in the late 1990s to express an emotion, concept or message in a simple, graphic way. Now, Twitter feeds, text messages and Facebook posts are crammed with them

Of the two thousand adults, aged 16 to 65, who were asked their views, 94 per cent reckoned English was in a state of decline, with 80 per cent citing youngsters as the worst offenders.

The most common errors made by Brits are spelling mistakes (21 per cent), followed closely by apostrophe placement (16 per cent) and the misuse of a comma (16 per cent).

More than half of British adults are not confident with their command of spelling and grammar, the study also found.

Furthermore, around three-quarters of adults rely on emoji to communicate, in addition to a dependence on predictive text and spell checking.

The use of emojis has seeped into our culture to such an extent that the Oxford Dictionary’s ‘Word of the Year’ in 2015 wasn’t actually a word at all – it was the Face With Tears emoji, which shows just how influential the little graphic images have become.

They were first used by Japanese mobile phone companies in the late 1990s to express an emotion, concept or message in a simple, graphic way.