Amadeus Signs Another Hotel Giant to Its Enterprise Software Platform

Amadeus has waited for years for a global hotel company to buy into its next-gen central reservation system. A win could signal sales momentum among enterprise clients.

Amadeus on Tuesday revealed it had signed on an as-yet-unnamed hotel company to use its hospitality software platform.

“We are going live in a few months with another major brand,” said Ilia Kostov, executive vice president and chief commercial officer, hospitality North America, at Amadeus in an interview in Dallas. “When they go live, we hope to be able to disclose it.”

The deal could catapult the Madrid-based technology group beyond its core airlines business into being a leading player in the hotel sector it has long coveted.

“It’s a very interesting brand, which is helping us push the limits to even more merchandising and even more non-routine product capabilities than our previous partners have so far,” said Kostov, who is head of North America sales for the company’s hospitality business.

Until now, only InterContinental Hotels Group (IHG) has been Amadeus’s high-profile customer for its guest reservation system. That partnership dates since around 2018.

Investment analysts will likely be intrigued by the news, depending on the size of the client once revealed. A new large hotel IT deal could provide higher momentum to the company’s revenues than analysts had expected to date. Roughly a fifth of Amadeus’s revenue came from its IT hospitality business and from non-air bookings, according to its most recent quarterly report.

“The company has continued to invest in key technology areas, such as hotel IT and the move to the public cloud, in order to sustain technology leadership for the longer term,” wrote analyst Stacy Pollard in her most recent Bank of America report on the company.

On nearly every quarterly earnings call for years, Pollard has asked executives when Amadeus might sign a new enterprise hotel client.

A brief deal with Premier Inn fell apart when that company changed its ownership.

Amadeus has been adding functionality to its cloud-native hotel tech platform in phases. It began with offering tools for managing inventory, reservations, and pricing as core service capabilities. It recently finished development work on the collection of tools ordinarily provided by property management system vendors such as Oracle Hospitality, Infor, Protel, Cloudbeds, Yanolja, Mews, and others.

Many large and global hotel companies have information scattered across databases that don’t sync seamlessly with one other. The siloed approach to data has hampered these companies’ abilities to make room and non-room offers that are more relevant to shoppers and guests. Amadeus’s new system promises to let a hotel know if a customer is, say, a millennial who is a member of its loyalty program, and thus allow the hotel group to offer the guest a relevant promotion, the vendor said.

Amadeus doesn’t just focus on the giants of the hotel industry but also offers various solutions for all sizes of properties, partly through past acquisitions of business intelligence provider TravelClick and hotel IT services specialist Newmarket.

“Those tools began by targeting independent boutique hotels but we’ve since built enterprise functionality to grow into the small and midsize brands,” said William Darrah, vice president of sales North America at Amadeus.

For example, in the pre-pandemic year of 2019, Amadeus’s reservation systems products — formerly part of TravelClick and one of the company’s most profitable product lines — had new sales growth of 40 percent.

“We’re taking share there as hoteliers shift from out-of-the-box, off-the-shelf solutions toward an integrated enterprise stack, having the website and the booking engine and the CRM [customer relationship management] and the PMS [property management system] in a one-stop-shop that provides singular guest profile data across all the solutions,” Darrah said.

But the big companies signing big contracts remains the most eye-catching goal. Amadeus executives said they’re hearing from many hotel executives about a renewed interest in hiring outside tech vendors rather than taking on enterprise software projects internally.

“As we come out of the crisis, we’re going to see some of the brands that historically have been investing in their own capabilities start making big bets with partners such as ourselves,” Kostov said.

'We won the love and kindness lottery' – Davis Enterprise 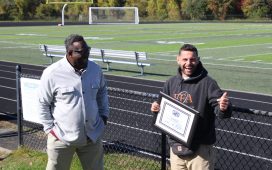