A once hidden island has been uncovered in Antarctica after melting glaciers caused by record high temperatures revealed its rocky shore to passing scientists.

A group of polar researchers from the Thwaites Offshore Research (THOR) project spotted the island as their ship passed through Pine Island Bay in Antarctica.

The island has been named Sif after the Norse goddess of fertility and family who was also the wife of the warrior god Thor by the THOR glacier research team.

Researchers on board the Nathaniel B. Palmer ship are studying Thwaites glacier in Pine Island bay, one of the fastest-retreating glaciers in Antarctica.

The team don’t know how long the island has been exposed but say it was likely revealed by higher than usual temperatures caused by climate change. 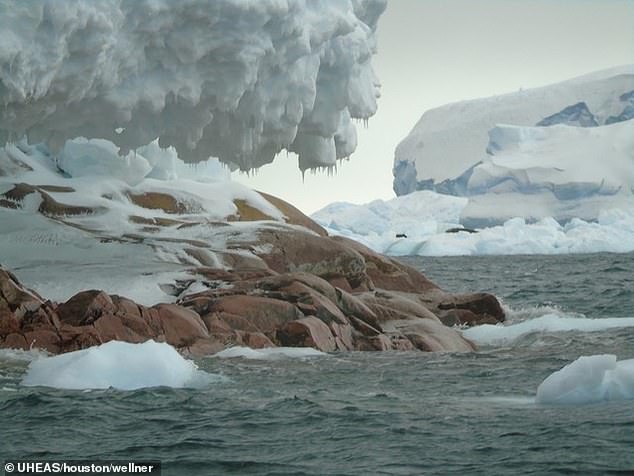 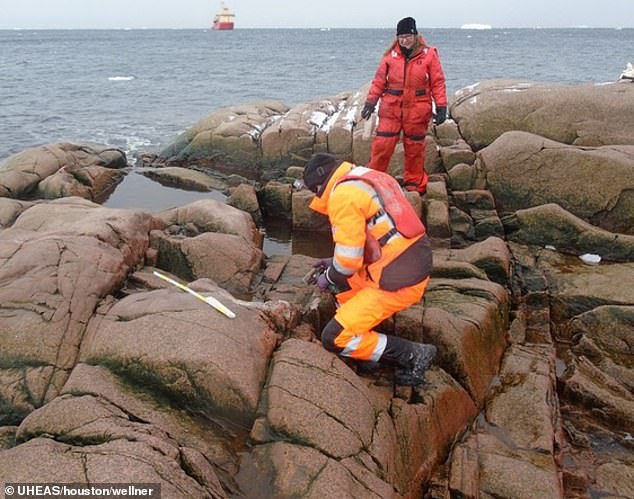 ‘After being the first visitors, we can now confirm that Sif Island is made of granite and that it is covered by remnant ice shelf, and a few seals,’ said Julia Smith Wellner from the THOR expedition team

It is big enough for satellites to spot from space but the never before seen island has previously been hidden under thick layers of ice.

The team haven’t said how big the island actually is but hope future missions will be able to study it in more detail.

Ships rarely travel as far south as the Palmer so the crew are likely the first to discover the island and may be the first humans to step foot on its rocky shore.

‘After being the first visitors, we can now confirm that Sif Island is made of granite and that it is covered by remnant ice shelf, and a few seals,’ said Julia Smith Wellner from the THOR expedition team.

They took samples from the island int he hope of getting a clearer picture of how the frozen continent is shifting but won’t know for sure until they get to a lab in March.

“This one island could hold a lot of clues,” University of Virginia in Charlottesville glacial geologist Lauren Simkins told Nature News.

As glaciers retreat they release pressure on the continent allowing the ground underneath the ice to rise up – a process called rapid rebound.

This sometimes stabilises the ice by anchoring it in place but can also accelerate the break up of the glacier by creating more cracks.

‘Rapid rebound could increase stress on the remaining ice sheet, causing it to break apart more quickly’, she said.

‘But a rising continental shelf could also anchor glaciers, increasing their stability and slowing their march to the sea.’

When they first spotted the new island, there was a commotion on board as everyone rushed to see the rocky land amongst miles of water and ice.

‘I think I see rocks,” shouted an officer aboard the ship.

They looked at charts and maps of the area and realised it was a ‘brand new island’ likely ‘never seen before’.

‘There was a commotion as everyone on board rushed to see the rocky, ice-covered outcrop and suggest potential names.

‘But the hubbub quickly gave way to excitement about the scientific implications of the find, says Wellner, a marine geologist at the University of Houston in Texas. 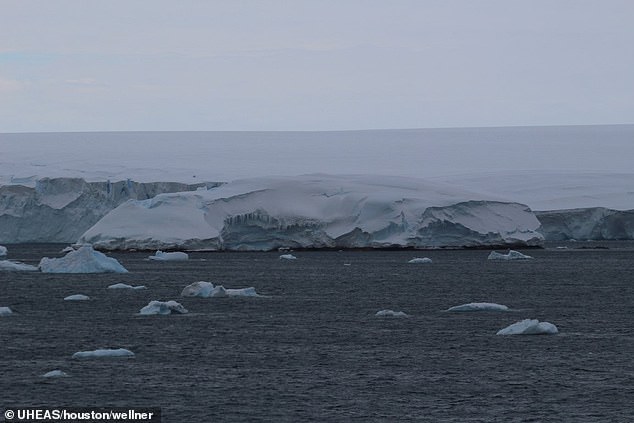 Climate scientist Peter Neff examined the new images and satellite data to try and determine how long it has been uncovered for.

He said it looks like ‘Sif Island’ has been slowly revealed since about 2010.

The THOR project is an international mission tasked with studying the stability of the massive Thwaites glacier in Pine Island Bay, Western Antarctica.

Researchers say the melting ice on the new rock will help them better determine how quickly changes are happening and what this means for the glacier.

‘New islands emerging as ice sheets retreat is not particularly surprising’, Paul Cutler, a programme director in glaciology at the US National Science Foundation in Alexandria, Virginia told Nature News.

‘New islands have appeared over the past few years in the Canadian Arctic and Greenland’ but this is ‘an exciting opportunity to piece together the geological history of a vastly under-studied region of Earth.’

The new discovery comes as NASA recorded a record high temperature for the continent – at 64 degrees Fahrenheit with melted ice spotted from space.

This is also not the first island in Antarctica to be effected by rising temperatures.

Satellite images last week revealed 20 per cent of snow on Eagle Island melted in just 10 days due to the extreme temperatures. 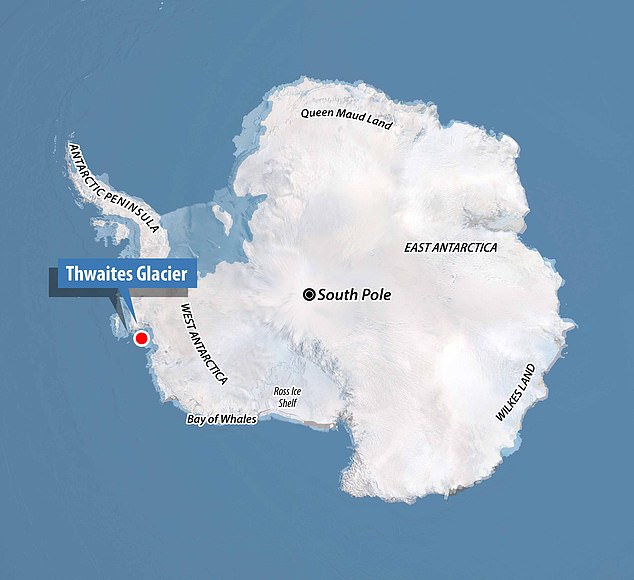 The warm spell began on February 5 and ran through to February 13, peaking on February 6, with temperatures on the Antarctic Peninsula reaching 64.9°F (18.3°C).

‘You see these kinds of melt events in Alaska and Greenland, but not usually in Antarctica.’

Sometimes called the Doomsday Glacier due to the potential impact its collapse could have on sea levels, Thwaites is unusually broad and fast.

Already, Thwaites accounts for about four per cent of global sea-level rise as warming waters cause it to melt from the underside.

Researchers have long held concerns that a tipping point in the stability at its foundations could result in a run-away collapse of the glacier.

There are multiple teams studying the glacier at the moment to determine the risk it poses to global sea levels and the newly uncovered island will feed into that work.

READ  Seasonal affective disorder: your eye colour might be why you have the 'winter blues'

HOW MUCH WILL SEA LEVELS RISE IN THE NEXT FEW CENTURIES?

Global sea levels could rise as much as 1.2 metres (4 feet) by 2300 even if we meet the 2015 Paris climate goals, scientists have warned.

The long-term change will be driven by a thaw of ice from Greenland to Antarctica that is set to re-draw global coastlines.

Sea level rise threatens cities from Shanghai to London, to low-lying swathes of Florida or Bangladesh, and to entire nations such as the Maldives.

It is vital that we curb emissions as soon as possible to avoid an even greater rise, a German-led team of researchers said in a new report.

Targets set by the accords include cutting greenhouse gas emissions to net zero in the second half of this century.

In addition, water naturally expands as it warms above four degrees Celsius (39.2°F).

Every five years of delay beyond 2020 in peaking global emissions would mean an extra 20 centimetres (8 inches) of sea level rise by 2300.

‘Sea level is often communicated as a really slow process that you can’t do much about … but the next 30 years really matter,’ lead author Dr Matthias Mengel, of the Potsdam Institute for Climate Impact Research, in Potsdam, Germany, told Reuters.

None of the nearly 200 governments to sign the Paris Accords are on track to meet its pledges.

Senate to look into science and technology funding

18 Advertising Tips for the Time of COVID-19; Wendy Clark Reflects About DDB: Tuesday’s...