6 Things You Didn’t Realize Your iPhone Could Automate


You can use your iPhone to create time-saving workflows and automations with Apple’s preinstalled Shortcuts app. If you haven’t yet dipped your toes into the world of iPhone automation, here are six examples to get you started.

How to Create Automations

To create an automation, launch the Shortcuts app on your iPhone and tap on the Automation tab. Now, tap “Create Personal Automation” to see a list of triggers that you can use. It’s also possible to create home automations, but we’re focusing on personal ones today.

Can’t find the Shortcuts app on your iPhone? It’s installed by default, but you might have uninstalled it. You can re-download Shortcuts for free from the App Store.

Once you’ve chosen a trigger, you’ll need to assign some actions, which we’ll cover for the examples below. We recommend using the search bar to find triggers since scrolling through Apple’s various categories can be time-consuming.

It’s also advisable to disable the “Ask Before Running” toggle when creating your automation since your automation will require an additional tap to run if you leave it enabled.

Lastly, if you have an Apple AirTag, you can use it as an NFC tag to trigger automations in the Shortcuts app, too.

Remembering to manually switch between watch faces is a pain, so why not automate the process instead? It’s easy to create an automation that changes your watch face based on the time and day of the week, or that switches whenever you arrive at work or home.

To do this, start a new Automation and pick “Time of Day,” and then tap “Weekly” to specify a time and day of the week, or use the “Arrive” and “Leave” triggers to set up a location-based trigger instead. Tap “Add Action,” and then choose “Set Watch Face,” followed by the face that you want to trigger.

Disable “Ask Before Running” and hit “Done” to save your Automation. You can now create similar automations for any other Watch faces that you might want to switch to based on your routine. The “Arrive” and “Leave” triggers are perfect for tagging locations (like a gym or workplace) if your schedule is unpredictable.

Social media can be a time sink. Most of us are aware of this but still fall victim to its addictive nature. You could set app limits for yourself using Screen Time that will restrict how much time you can spend on these apps, or you could take a gentler approach with a mindful reminder instead.

This works by triggering an app-specific notification after a certain amount of time has elapsed. This will work with just about any app, but we’ll be using Facebook for our example.

Create a new personal automation, choose “App” as the trigger, and tap “Choose” to select the app in question. Make sure that the “Is Opened” condition is selected, and then hit “Next” to continue. Tap “Add Action” and add “Wait,” followed by the delay in seconds before your notification triggers (We chose 120 seconds.).

Now, hit the plus “+” button and add the “Show Notification” action. Replace “Hello World” with something like “You’ve been browsing Facebook for two minutes.” Then, hit “Next,” followed by “Done” to save your automation (taking care to disable “Ask Before Running”).

You could expand this automation to add another “Wait 180 seconds” action, followed by a “Show Notification” action that says “You’ve been browsing Facebook for five minutes,” and so on. 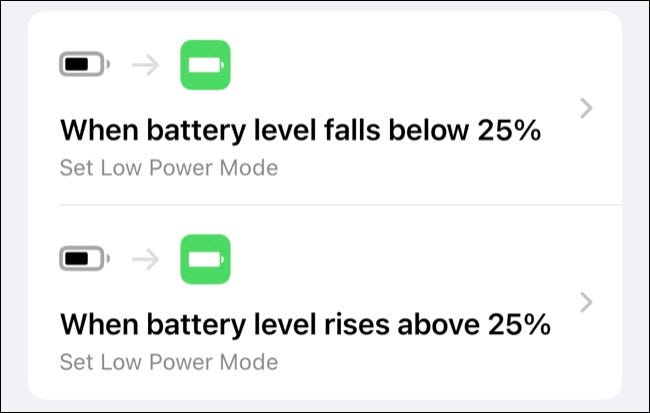 Low Power Mode is a useful way to stretch your iPhone’s battery life if you’re running low on juice. The feature disables certain features like automatic fetching of mail and reduces screen brightness to save as much energy as possible. You’ll often see the “Low Power Mode” button appear next to low-battery alerts.

With Shortcuts, you can trigger Low Power Mode automatically when your battery reaches a certain percentage. You can also create a complementary automation that disables the feature once the battery has recovered.

To do this, create a new personal automation and choose “Battery Level” as the trigger. Set the battery percentage that you want to use to trigger Low Power Mode by moving the slider, and then tap on “Falls Below X%” below. Tap “Next,” and then “Add Action.” Then, find “Set Low Power Mode,” and make sure that “On” is selected.

See also  Your New iPhone 12 Won’t Come With a Charger, So Buy One Now – Review Geek

Hit “Next” and “Done” to save your automation. Now, create another automation to disable the setting, making sure to select “Rises Above X%” for the trigger, and “Set Low Power Mode” to “Off,” too. Low Power Mode will now activate and deactivate based purely on your battery percentage.

Launch Your Music App When Connecting a Speaker or Headphones

If you have wireless headphones or a Bluetooth speaker, you can use them as a trigger whenever your iPhone connects. This is particularly useful if you use something like Spotify, which doesn’t have the same level of integration with the iOS operating system that Apple Music does.

For Apple Music users, there are triggers to start playing specific playlists, or if you’re a podcast or audiobook fan, you can use this trigger to launch your preferred app instead.

First, create a new personal automation with “Bluetooth” as the trigger. Select the device that you want to trigger your automation, and then hit “Next” to add actions. You can use the “Open App” action to specify your music, podcast, or audiobook player of choice.

For driving, you can create a similar automation, except using “CarPlay” as the trigger (assuming that your car has CarPlay support). If you don’t have CarPlay support, you might want to add an NFC trigger to your dashboard to do something similar.

Enable Do Not Disturb in Games or Other Apps 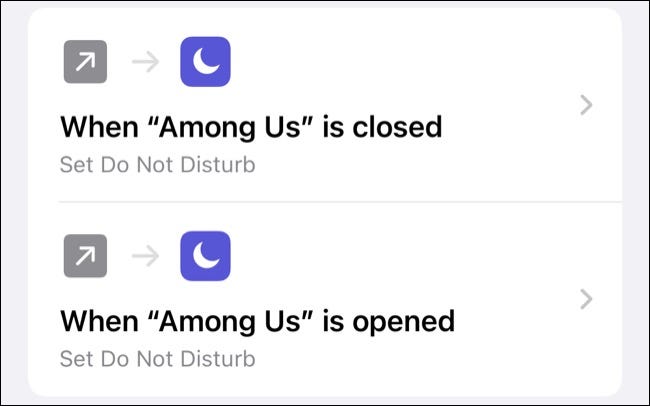 If you use your iPhone for playing online games like Among Us or Fortnite, you probably don’t want to be disturbed while a match is taking place. That’s exactly where this Do Not Disturb mode automation comes in. By default, Do Not Disturb mode silences incoming calls and notifications whenever your device is locked.

With one tweak, the feature can be used to silence all calls and notifications. To do this, head to Settings > Do Not Disturb and enable “Always” under the “Silence” section. If you don’t change this setting, the following automation won’t have any effect. 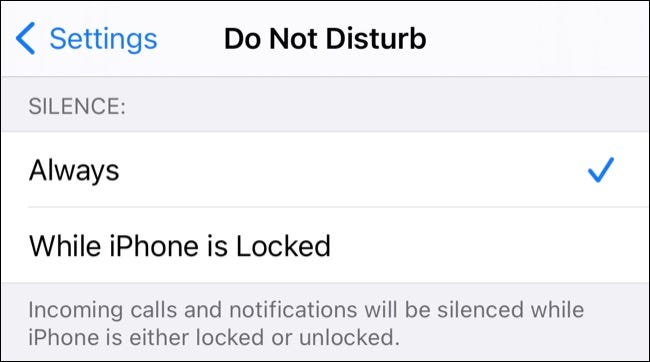 Now, create a new personal automation with “App” as the trigger. Choose your desired game or app and make sure that only “Is Opened” is selected below. Hit “Next,” and then “Add Action,” and choose “Set Do Not Disturb” with the conditions “On” until “Turned Off” to enable it indefinitely. Hit “Next” and “Done” to save your automation, but turn off “Ask Before Running” first.

In order for your iPhone to disable Do Not Disturb mode when you’re finished playing, you’ll need to create another automation. Choose “App” as the trigger, and then select the same app, and make sure that only “Is Closed” is enabled. Hit “Next,” and choose “Set Do Not Disturb” to “Off” as an action, and then save it with the “Ask Before Running” toggle disabled.

Make Your iPhone Announce When the Battery Is Charged

We’ve already covered how to make your iPhone scream when you connect it to power in the past. This is a fun trick, but not as useful as an automation that announces when your iPhone has reached your desired battery capacity.

Be aware that Apple’s optimized charging might delay your device from hitting the ideal 100% charge, so picking a capacity like 80% might be more useful in some instances. You can create multiple automations for different battery percentages if you want.

To start, create a new personal automation with “Battery Level” as the trigger. Figure out at what battery percentage you’d like your iPhone to make its announcement, and make sure that “Rises Above X%” is selected below. Hit “Next,” and then “Add Action,” followed by the “Speak Text” action.

Replace “Text” with whatever you want your iPhone to say at this point, and then tap on “Show More” to see further options. You can select a language, voice, pitch, and speed (rate). Use the “Play” button at the bottom of the screen to preview your announcement, and then hit “Next” and disable “Ask Before Running,” followed by “Done” to save.

Get Creative with Automations

These automations are basic but useful, and they can be used as a starting point for far more complex workflows. If you’re looking for inspiration, the r/Shortcuts subreddit is a great resource for both automation ideas and shortcut recipes.

Shortcuts on your iPhone are great, but did you know that you can trigger Shortcuts workflows on your Apple Watch, too?

RELATED: How to Use Shortcuts on Apple Watch 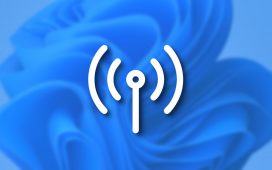 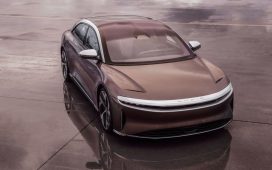 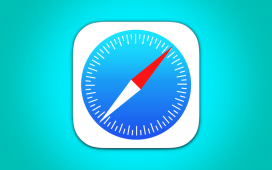 How to Get the Old Safari Back on iPhone

How to Record Linux Terminal Commands With “script” – CloudSavvy IT 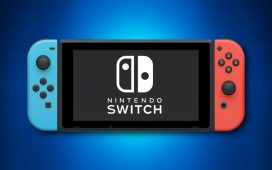 How to Pair Bluetooth Headphones to Nintendo Switch

Making the case for artificial intelligence

The Spying That Changed Big Tech

Mayim Bialik and Ken Jennings to Host Jeopardy! Through End of Year

Android 12’s Coolest Feature Will Be a Pixel Exclusive