2021 Porsche 911 Turbo S First Drive Review: How is This Even Possible?

LOS ANGELES, California—If it sounds like we’re enormous fans of Porsche here at Automobile, it’s because we are. How could we not be? Forget, for a moment, the epic legacy of Stuttgart’s sports car masterminds, and consider for a moment just the cars that have been put on sale over the last few years. There’s the utterly epic 911 GT3 and GT3 RS, of course, and the 2019 Automobile All-Star GT2 RS. Then there’s the 2020 Automobile All-Star Carrera S, the 718 Spyder—very nearly an All-Star as well—and the Cayman GT4. In other words, six of the best sports cars in history are in Porsche’s lineup. No, wait, make that seven; we must add the 2021 Porsche 911 Turbo S to the list.

Blasting up, and then back down, and then back up Angeles Crest Highway in the new 992-generation 911 Turbo S is, at first, an unsettling experience. Even apart from the bizarre quietude of the normally busy road, the new Turbo S’s effortless pace is unnerving. It looks more or less like a normal 911 Carrera, though it doesn’t take a particularly astute observer to notice just how wide the new Turbo S is, or that the aerodynamic bits at either end look a bit unusual, too. But all in all, its visual statement is more a calm assertion of aptitude than the 640-horsepower roar you might expect. That is, until you put your foot down. As the seat shoves your body forward so fast your face can’t quite keep up, stretching and smushing the flesh against your skull, the eight-speed PDK transmission rips off nearly seamless shifts, a throaty, breathy “blatt!” the most palpable demarcation between gears. The 3.8-liter flat-six engine, force-fed by a pair of (now symmetrically mounted) variable-geometry turbine (VGT) turbochargers blasts 640 hp and 590 lb-ft of torque to all four wheels. Keep your foot down and you’ll hit 60 mph in a claimed 2.6 seconds, although it’ll feel quicker—and knowing Porsche’s tendency to issue conservative official performance numbers, it almost certainly is quicker. Have a very large closed course at your disposal? You can carry on to knock out the quarter-mile in 10.5 seconds, and then onward to the 2021 911 Turbo S’s top speed of 205 mph.

Worry not if you don’t have a large closed course at your disposal, however. As fiercely capable and brutally quick as the 911 Turbo S is, it’s not meant to be a hardcore track car. That’s what Porsche’s GT division does so well, and this is no GT car. That’s not to say GT-bred performance doesn’t shine through at every corner; in fact, in every way that matters, the Turbo S is every bit the road-focused counterpart to the GT2 RS’s laser-focused track mission.

Much like the GT2 RS is on racetracks, the 2021 911 Turbo S is ridiculously, absurdly well-tuned for the road. Comfort abounds, even over the rougher sections of Los Angeles freeway and surface streets, and though there are limits to the PASM dynamic suspension’s ability to absorb abuse, you’ll cry uncle long before it does.

Despite the Turbo’s more pliant, commute-friendly setup, it’s no softy. The dynamic suspension adjustment means turning the steering wheel-mounted performance selector knob to Sport+ mode does more than wake up the car’s brass section. Pointing up that well-honed suspension setup at every turn is the immaculate responsiveness of the front axle to steering inputs.

Driving the standard Carrera S during our most recent All-Stars testing, race driver and contributor Andy Pilgrim could hardly contain himself. “Front end, front end, front end. A more connected steering feel when compared to any previous 911 Carrera,” said Pilgrim. “I could place it, almost violently, anywhere on track.” Now turn the pace up to 11 and you have the Turbo S.

Great street performance is meaningless if it makes you miserable around town, though, right? Especially when you’re talking about a $212,450 vehicle. Unlike many Porsches, the Turbo S’s price tag isn’t half optional extras; the as-tested price of our example exceeded the $204,850 sticker price by just $7,600, for example. What were the extra-cost items? Among the highlights were the PASM Sport suspension ($1,510), which lowers the Turbo S an additional 10 millimeters (0.4 inch) compared to stock ride height; LED Matrix headlights ($750) with Porsche Dynamic Light System Plus; as well as the core driving assistance features of lane-keep Assist ($1,220), adaptive cruise control ($2,000), and lane-change assist ($1,060).

You might notice a decided lack of interior upholstery or appearance upgrades. That’s because there were none added to the car we tested, and, after spending a full day of freeway, city, and canyon driving inside it, I can confirm the 2021 Porsche 911 Turbo S needs no interior upgrades. It’s every bit as comfortable as any other 911, and it’s even a bit better looking, thanks to the classic nods all around the cabin, including quilted door panels that will look familiar to any classic 911 owner, and interior stitching designed to evoke the original Turbo.

So I may have spoken a bit boldly on the strength of a single day with the car, but the first impression is that strong: I am certain this will prove to be one of the greatest sports cars in history. Why? It’s hard to break it down into bullet points, but it has the feeling, the je ne sais quois that all very special cars have; for the properly attuned, all it takes is one quick drive to simply get it.

Perhaps the new 2021 Porsche 911 Turbo S is so good because, if there’s one thing Americans and Germans both understand at our cores, it’s the idea of more. The Turbo S is a 911—a brilliant, unflappable sports car—with more everything: power, balance, grip, acceleration, feel, style, sound, all of it.

The post 2021 Porsche 911 Turbo S First Drive Review: How is This Even Possible? appeared first on Automobile Magazine. 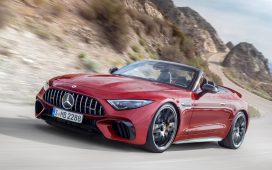 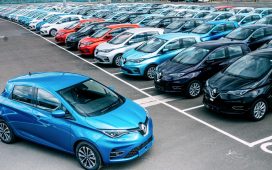 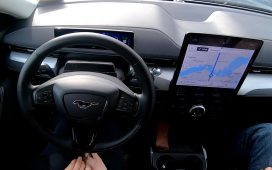